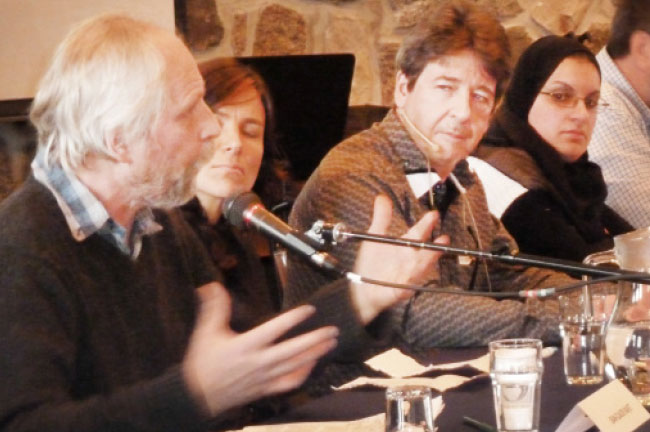 The Province of Quebec’s proposed charter of values is generating charged debate about the place of religion in a secular society. If the charter is adopted, it will prohibit Quebec’s public sector employees from wearing conspicuously visible religious clothing, headgear and symbols.

The Quebec Conference of MB Churches (AEFMQ) along with ETEM-IBVIE, Mennonite Central Committee Quebec, Montreal Centre for Anabaptist Studies and the Mennonite Historical Society of Quebec organized a one-day gathering Nov. 30, 2013, to discuss the charter to enable the Christian community to bring a “grain of salt” to the conversation.

The 45 people in attendance heard speakers who support and oppose the charter, including clergy from the Roman Catholic church and a psychologist.

Pro-charter speakers raised concerns about women being negatively affected by religious traditions and emphasized the need for clear guidelines to facilitate relations between various groups.

Speakers opposing the charter spoke about the importance of treating all people with respect and the need to protect vulnerable newcomers to Canada.

Personal experiences were shared. A Muslim woman who wears a hijab, Rehab Hassan believes that choice has prevented her from working in her field of training, dentistry. Instead, she is director of a child care facility.

Mennonite Central Committee worker Anicka Fast acknowledged the Quebecois fear of a loss of identity in the face of immigration, but noted that Anabaptism refuses to dichotomize private and public life. She urged listeners to reject easy stereotypes that mask deeper reasons; the best method to surmount preconceived ideas is personal relationships.

Professor of church history at ETEM Richard Lougheed, who studies long-term trends, told the Canadian Conference of MB Churches reporter if the charter is passed, it has the potential to affect the churches that belong to the Quebec MB conference (AEFMQ) and the ministries they support.

“There are valid differences in opinion,” said Lougheed. “At a minimum level, let’s talk about it and pray together, even if we don’t come to a mutual understanding.”