What's New
Delete or not to delete, that is the...
Believers bring water for drought baptism
Encouragement to those in the arena
Keeping attention and making an impact: A few...
Open hands to reconciliation
From the editor
Approaching truth and reconciliation with love in our...
MB Seminary offers new MA in Transformational Leadership...
Multiply August Ukraine Updates
Book Review of Return Stroke: Essays & Memoir...
Home News Two francophone theological schools become one

“The merger of ETEM and IBVIE sets an example of how Christian groups can work together in a secular, post-Catholic context,” says ETEQ president Kristen Corrigan.

“In Ezekiel 37:15–22, Ezekiel holds up two pieces of wood inscribed with the names of Judah and Joseph to show that what was once distinct is now joined,” says Corrigan. “We take this as our example of two schools uniting under God.”

The benefits of the merger include more efficient use of financial and human resources and the potential for fostering and strengthening other partnerships, including the relationship with Université Laval, through which students receive course credit and internationally recognized degrees.

Over the past five years of joint operations, ETEM-IBVIE has developed three certificate programs, a bachelor’s degree – and this past fall – a master’s program. In 2015–16, the college celebrated a record enrollment of 70 students (850 credit hours).

The relationship between the two schools has been growing for many years. In 2009, IBVIE moved from Quebec City onto shared premises with ETEM, and the two schools began blending courses in the 2010–2011 school year. 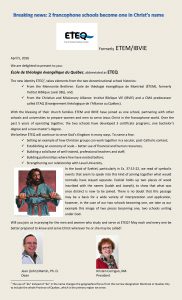 ETEM’s predecessor, Institut Biblique Laval (IBL), began in 1976 by “accident”: while in recovery from a car crash in Quebec, Henry Brucks, secretary of the MB Board of Evangelism, had a vision for training leaders for the Quebec church.

IBL students received academic credits through Université de Montréal starting in 1990. In 2000–01, under president Éric Wingender, IBL changed its name to ETEM to reflect the institution’s status as an undergraduate school of evangelical theology.

The “du” instead of “de” in “École de théologie évangélique du Québec” changes the geographical focus from the narrow designation of Montreal or Quebec City to the whole province – the primary region the school serves.

—Angeline Schellenberg with files from ETEQ, GAMEO and the MB Herald