What's New
Through the conflict, life carries on in Ukraine
A FOCUS on Mission
Must Patience Be So Slow?
Harold Jantz: A Heart for the Mennonite Story
Lorlie Barkman: A Life of Creative Engagement
Last Days, First Days
Women in Ministry: Bertha Dyck
January Moment in Prayer “Holy Spirit—Fill Us!”
The Church as the Patient Body of Christ
Advent: Making Much of Jesus: Christmas Day
Home News ETEQ president resigns 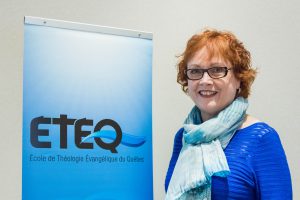 The board of École de théologie évangélique du Québec (ETEQ) is sad to announce that Kristen Corrigan has resigned her role as President of ETEQ, effective July 1, 2019. After 10 years serving in Quebec, she and Garry feel called to return to BC where she plans to continue, in a new, albeit smaller role for ETEQ and spend time with grandchildren and their large extended family.

Born in Sainte Foy, Quebec, Kristen grew up in a small village north of Quebec City. She spent most of her adult life in British Columbia where she held several management positions for BC Tel (now TELUS) and, eventually, carried out successful practice as a Human Resources, Governance and Strategic planning Consultant. From February 2002 to January 2007, Kristen held the position of Executive Director – Human Resources at Trinity Western University.

In 2008, Kristen accepted a call from the Quebec Conference of Mennonite Brethren Churches to come to Montreal to serve both the Quebec Conference of MB Churches and “l’École de Théologie évangélique de Montreal” (ETEM) as management, governance and strategic planning professional. Not long after they arrived, Kristen became president of ETEM. In this regard, she was an important actor in developing a good collaborative relationship with IBVIE (the Christian and Missionary Alliance theological school in Montreal), that led to the fusion of the two schools and the formation of “L’École de théologie évangélique du Québec” (ETEQ), of which she became the first president in 2016.

The Board of ETEQ is grateful to Kristen for her dedicated work for the school. Her relational and managerial skills have helped us considerably during the transition period. The Board will look at ways in which Kristen may continue to serve the school and its constituencies. Finally, the Board wants to express gratitude to Garry, Kristen’s husband, for the many services granted during Kristen’s tenure.

A search process is now being launched to fill the position.