What's New
Leading through the trauma of covid: Part two...
Ask God which town
Where to from here?
CCMBC National Director attends 2022 ICOMB Summit
MCC Canada and MCC Manitoba sell shared property...
The world appears to be growing darker
Sharing a new and unified language
6 reasons to attend the MWC Global Assembly...
One too many
Just one more
Home Life & Faithfeature articles A winding path to ICOMB leadership 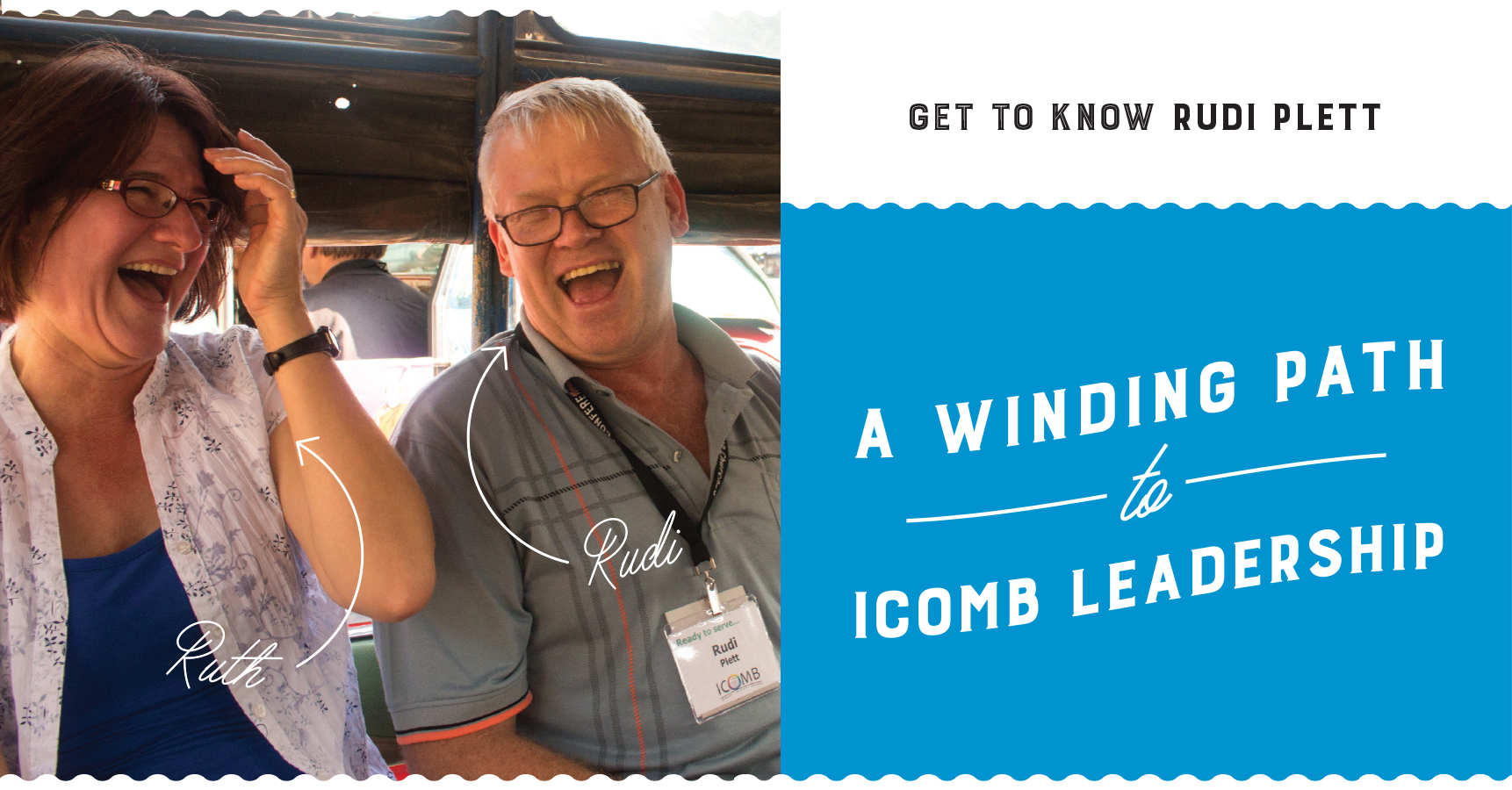 Rudi Plett of Asuncion, Paraguay, was installed in June as the new executive director of the International Community of Mennonite Brethren (ICOMB). In an interview with freelance writer and MB member Kathy Heinrichs Wiest, Plett shares the story of his wayward youth and how God has led and equipped him for leadership in the global Mennonite Brethren family.

Where does the ICOMB executive director work from now?

I could do this role from anywhere, but we are remaining in Asuncion where we can stay at the same church and go on with our normal family life. We have five children ages 9 to 22.

Our preliminary solution has been for me to set up at home in my wife Ruth’s office. She is a psychologist volunteering in leadership in the Haggai Institute in Paraguay.

As a Paraguayan of German heritage, you have a culturally diverse background.

Sometimes people ask me if I’m a Latino or more Caucasian. I tell them neither – I’m culturally mestizo [mixed].

To live in different cultures is normal for me. I grew up in a Spanish neighbourhood, went to German-speaking school, and my parents were church planters planting Spanish-speaking churches. There were Korean shops around us. And we met a lot of Indigenous people when we went to visit my uncles on their farms in the Chaco.

I had to learn later what it means to live in one cultural setting.

I came to Christ after a time in drugs and occultism in my youth. I had come to despise my Mennonite people because of injustice I saw. But, at age 18, I was sick, depressed, suicidal. That’s when I met God. On Nov. 14, some friends and I were doing magic mushrooms [a hallucinogenic drug] and asking for the filling of the Holy Spirit. The Enemy showed himself very strongly. I screamed to God with all my heart and his presence brought peace.

The experience pushed us all forward to decide if we would be with God or stay vulnerable to the Enemy.

Where did God lead you from there?

I had a lot of damage in my soul and needed guidance in moving toward a healthier way to think and feel and live. But instead of a rehabilitation centre, God sent me for a year with [the mission agency] Operation Mobilization. The first four months I was on the ship Doulos with 350 people representing 35–40 countries. Then I was eight months with an evangelism team in Austria. When I went back to Paraguay, my journey in the multicultural setting was quite strong.

Did you consider becoming a long-term missionary?

After my conversion, God clearly called me to preach his name. I told God: “You can send me wherever you want to, but please don’t send me to the Mennonites.” I would read Bible texts where God says, “Go to your people,” and they would feel like they were for me, but I would say, “No, no, no!”

God had to go to a very dramatic way to convince me: A friend in church told me, “I know a guy who had a dream of you; he described you and I knew it was you.” The guy came to the butcher shop where I was working at and recognized me from his dream. He told me that God wanted me to go back to my people. Even though I was being discipled and was about to be baptized in the Spanish church, after that I was baptized in the German church.*

Later, after theological school in Germany, we were looking into going as missionaries to Romania, but God again clearly called me back to Paraguay where we served the German-speaking Concordia Mennonite Brethren Church for 16 years.

What do these experiences bring to your role with ICOMB?

God is a reality, and he works today, often beyond our human understanding. There have been months and years when, if someone had seen what I was thinking, they would doubt that I was a Christian. We were mixing drugs and yoga with Christian faith. But I know that even if you start from a bad place you can walk toward Christ. It’s easier for me to see that a person can be following Christ even if some parts of his life still need big change.

It helps me to have a realistic view of the church. I have seen injustice and churches fighting with each other. Like other teachers and leaders, I have made mistakes that had serious consequences. And sometimes relationships will not be the same. But it is still Jesus’ body and he will go on leading it. I hope I can encourage others to trust that God is at work, even if we see sin, pain, injustice, disbelief, and no easy way out of it.

How did you get your start with ICOMB?

In 2008, our conference leader could not to go to the ICOMB meeting. I wasn’t in an official position to do this, but the leaders thought I should go and represent the conference.

This coming together of people excited me – conferences sharing what they have with others who have a need. Like when a lady from Paraguay wanted to teach English in Japan. At an ICOMB meeting, the Paraguay leader learned that the church in Japan was looking for English teachers. This story has shown me there is great potential that I am still exploring.

How can ICOMB better facilitate this sharing?

ICOMB has historically called together the presidents and leaders of national conferences, but this only brings the perspective of one person from each country. In order to create a stronger exchange, we need to bring more leaders together. We are creating opportunities for conferences from the same region to meet and build partnerships. In Latin America, we have already seen amazing change in just one year.

What other signs of success will you be looking for?

Each church in its culture will have some differences, but we need to draw a clear picture of what a healthy conference looks like, no matter what its cultural context. Sometimes you can have a good healthy missional church because one leader has been leading well, but we want to see whole conferences that are healthy and having an impact on all their churches. This can happen as conferences are connected and accountable to each other. Through ICOMB, we will help make those connections that lead to a healthy global family.

This article is jointly published by MB Herald and Christian Leader.

*Editor’s note: The Mennonite church in Paraguay has two separate conferences, one formed primarily from the German-speaking Mennonites who arrived via Ukraine after the world wars, and one formed primarily from subsequent missionary efforts among local people in the country. The two conferences work together now, partnering together in Instituto Bíblico Asunción (a Bible college) and Radio Obedeira (an evangelistic radio station).

Khmu Mission: The conference’s goal is to reach Khmu people in Vietnam and Myanmar. Pray also

Democratic Republic of the Congo (DRC)

Communauté des Églises des Frères Mennonites au Congo (CEFMC): Pray for a country in turmoil, affected by armed conflict, corruption, and resource exploitation. Church leaders and members are drained from responding to crisis after crisis. Pray for energy and strength, for encouragement and hope, for peace in DR Congo.
Read more: mbherald.com/inter-mennonite-relief-drc

Asociación Hermanos Menonitas (AHM): Pray for young leaders to receive the mentoring, training, and opportunities needed for growth. Pray for the four new church plants started. Praise God for new connections made to other conferences in Latin America and new opportunities.