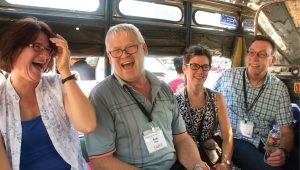 Ruth and Rudi Plett from Paraguay share a laugh and cab with Marcy and Gord Fleming in Thailand.

The ICOMB executive committee is happy to announce the appointment of Rudi Plett of Asuncion, Paraguay, to the position of executive director.

Rudi previously served ICOMB as associate director – Latin America and as regional team leader for MB Mission from January 2017 until the present. He will begin to serve full time as ICOMB executive director starting July 1, 2018, immediately following the retirement of David Wiebe of Canada. Rudi will work from Asuncion.

Rudi is well known to ICOMB leaders as former representative of the Vereinigung der Mennoniten Brudergemeinden Paraguay (German MB Conference), and ICOMB chair 2012–2016. Rudi was also pastor of the Concordia MB church in Asuncion until end of 2016. Rebekah Doerksen, assistant to David Wiebe, will continue, working for Rudi from the Winnipeg office.