What's New
A FOCUS on Mission
Must Patience Be So Slow?
Harold Jantz: A Heart for the Mennonite Story
Lorlie Barkman: A Life of Creative Engagement
Last Days, First Days
Women in Ministry: Bertha Dyck
January Moment in Prayer “Holy Spirit—Fill Us!”
The Church as the Patient Body of Christ
Advent: Making Much of Jesus: Christmas Day
Advent: Making Much of Jesus: Fourth Advent
Home Arts & Culture Addressing the skeptics 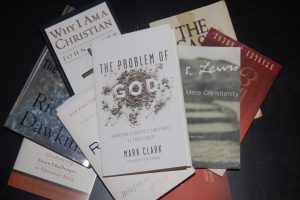 Keith Reed wonders, how does it stack up?

The Problem of God: Answering a Skeptic’s Challenges to Christianity
Mark Clark
Zondervan

The author provides responses to 10 objections to Christianity that emerged from his own journey from skeptic to minister at a church filled with skeptics.

Clark’s chapter on exclusivity is especially strong because he disarms the popular push for inclusivism by citing its irrationality in multiple ways. Because all ideas – and thereby all religions – are not equal, the rational person will evaluate each belief system to determine the one that rings most true.

Is the book’s argument in harmony with the MB Confession of Faith?

In response to the “problems” raised against Christianity, Clark provides some theological answers that may cause readers to question its agreement with the MB Conference of Faith.

For instance, Clark’s affirmation of God’s design for sex within marriage is so strong that singleness and celibacy are not even mentioned in his book. (Article 11 states that “singleness is honored equally with marriage, sometimes even preferred.”)

Another example is Clark’s teachings on hell which are not directly opposed to the MB Confession of Faith, but will likely cause readers to re-examine Article 18.

My biggest disappointment in the book is Clark’s failure to address same-sex attraction or relationships. For a book on this subject published in 2017, I assumed the author would devote a chapter to this subject since the idea of an “anti-gay God” is objectionable to many skeptics and often cited as a serious reason for discounting Christianity.

As a resident of Surrey, I often hear about Mark Clark and I have friends who are part of Village Church. The subject of this book caught my attention and I felt Clark would offer a unique perspective as a former atheist. Specifically, I wanted to know what this book would add to the growing collection of works on this subject and how Clark would address objections that current skeptics are now asking.

The Problem of God has received endorsements from writers including Larry Osborne, Bruxy Cavey, and Carey Nieuwhof.

Given the author’s perspective as a former skeptic and a pastor under 40, I anticipated that Clark’s book would cater to millennials and those exploring faith questions for the first time. However, Clark’s arguments assume readers have significant knowledge of theology which makes me think twice about who should be reading it.

It is a valuable contribution to the field of apologetics, but I don’t feel it provides enough unique material to warrant a recommendation over Timothy Keller’s The Reason for God or C.S. Lewis’s Mere Christianity, both of which I regard as essential reading.

“My father was such an ardent atheist that he demanded my mother spell my brother’s name, Mathew, with only one t so as to not be biblical. He then named me Mark. Clearly he didn’t see the irony.”

“I believe in Christianity not just because it’s true but because it works.”

[Keith Reed is a member of North Langley (B.C.) Community Church and is associate director of MinistryLift for MB Seminary.

Discussing our faith without losing our minds

With gentleness and respect

This book shouldn’t be recommended to anyone ever — because it’s just bad. Clark is a rank amateur who is not well-equipped to handle most of the issues he goes over. He misleads everyone who reads it; or at least those who are even more unfamiliar with the issues than Clark is. See the comment section of my review at Amazon for details: https://www.amazon.ca/gp/customer-reviews/R3Q3ZV2C6CPXCO/ref=cm_cr_arp_d_rvw_ttl?ie=UTF8&ASIN=0310535220