What's New
A FOCUS on Mission
Must Patience Be So Slow?
Harold Jantz: A Heart for the Mennonite Story
Lorlie Barkman: A Life of Creative Engagement
Last Days, First Days
Women in Ministry: Bertha Dyck
January Moment in Prayer “Holy Spirit—Fill Us!”
The Church as the Patient Body of Christ
Advent: Making Much of Jesus: Christmas Day
Advent: Making Much of Jesus: Fourth Advent
Home Life & Faithfeature articles With gentleness and respect

With gentleness and respect 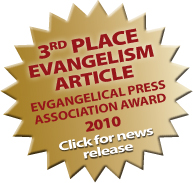 Among the more pleasant discoveries during my first few weeks on the job as a pastor was a delightful café a mere stone’s throw from our church. It’s a warm and inviting space where all kinds of people – from neo-pagans to evangelical Christians to atheists and agnostics – gather for coffee and conversation.

One of the first people I met was Tyler, a barista known for his espresso and love of philosophy. As someone who majored in philosophy during my university days, I found my curiosity piqued. I began to ask Tyler about his studies while he made my coffees. We talked about philosophy, theology, ethics, and politics; about thinkers from Aristotle to Job to John Stuart Mill to Jesus.

Tyler describes himself as an agnostic. Some days, he’ll use the word “atheist”; other days he comes pretty close to admitting there might be a God out there. But he’s not convinced. He doesn’t see why God is necessary. As the 18th-century mathematician and astronomer Pierre-Simon Laplace is reported to have said in response to Napoleon’s query why he had not mentioned God in his astronomy book, Tyler claims to “have no need for that hypothesis.”

One day while waiting for my coffee, Tyler asked me if we had a young adults group in our church. We didn’t. “Why don’t you start one?” he asked. Why not, indeed? I sent out some emails and a few weeks later a group of twenty-somethings began meeting at our house for discussions about faith, hope, and even philosophy. A community began to form.

At first I wondered what the dynamic of one lonely agnostic in a group of Christians might look like. But it’s been great to have Tyler among us. He asks the irreverent questions others might shy away from. He pushes the group to consider other points of view. He doesn’t accept Christian platitudes. And at the end of our meetings, he bows his head with the rest of us as we offer our prayers to a God he’s not convinced is even there.

Tyler and the New Atheists

A few years ago, I wrote my masters thesis on the so-called “New Atheists” and how their atheism was an ironic response to the problem of evil. Richard Dawkins, Christopher Hitchens, and Sam Harris (among others) had all come out with blistering attacks against God and religion within a very short time period. I sought to interpret these polemics as forms of protest atheism – a three-pronged “no!” to God based on their interpretation of his behaviour in Scripture, the parameters of human existence, and the hypocrisy and immorality of those who claimed to follow him.

Their writings were angry and condescending. They mocked God and those who followed him. And they were all bestsellers.

One of the things I discovered as I spent a year wading through and writing about this stream of angry atheist rhetoric was that however much they tried to construe the theist/atheist debate as one of faith vs. reason or superstition vs. enlightenment, their central concerns were moral ones.

It’s not as though the New Atheists suddenly discovered, at the dawn of the 21st century, that God was not an observable part of the material world. Their atheism springs from a different source. They can’t or won’t believe that a good God would create a world that contains the amount and variety of evil that ours exhibits. They can’t believe that those who claim to be in relationship with a good God with good plans for the world sometimes behave so badly.

Like the New Atheists, some of Tyler’s biggest questions are moral in nature. He shares some of their indignation at the moral behaviour of religious people. He echoes their questions about what natural evil is doing in a good world governed by a good God. He recoils with them at some of the more unpleasant passages of Scripture. While his tone differs considerably from the New Atheists, his unbelief is also rooted in moral concerns.

Apologetics – what’s it good for?

Alister McGrath described apologetics as “removing obstacles to belief.” Not “proving” the truth of Christianity.

Not winning arguments with atheists. Not “defeating” those who reject the gospel. Very few people are argued into the kingdom. Discipleship is not the logical response to a carefully crafted rational proof. But it can be the result – if only in part – of Christians taking the time to remove unnecessary barriers so that people can see Jesus more clearly.

Of course, we will want to have good reasons for our atheist neighbours about why we think atheism is an inaccurate “reading” of the cosmos. We will want to bring up the inherent inconsistency in espousing a moral purpose and goal to life in a world that came about exclusively through material causes. We will want to ask questions about atheism’s history of violence and oppression. We will want to talk about the necessity of faith in every worldview – about how no claim to understand the big picture can be empirically proven. These questions, and others, deserve our careful attention.

But adequate responses to these questions can only go so far. Both in researching and writing about atheism and in conversations with atheists, I have become convinced that atheism becomes immensely more attractive when followers of Jesus are not doing their job properly. The world expects better from us. They have a right to.

So what would “better” look like? Well, for starters, a corporate Christian witness that:

A consistent embodiment of these qualities, among others, would take a good deal of the sting out of the morally strident attacks of the current prophets of irreligion. As followers of Jesus, we cannot remove every obstacle to belief. Christianity will always have its detractors – sometimes even very angry ones. But the “offense” of the cross never gives us license to be offensive people.

There are at least three benefits to making sure that our approach to atheism in general and atheists in particular reflects the character of Christ. First, we honour God by treating our atheist neighbours as divine image bearers and, like us, dearly loved sinners for whom Christ died. Second, we bear witness to the gospel truths that Jesus came to effect transformation among his followers and that we are to love our enemies.

Tyler now works at another café, but he continues to come to our Bible study group. In fact, some of our most interesting and passionate discussions take place when he’s there to push us. Tyler might be an atheist/agnostic, but he is deeply committed to goodness and truth – commitments that all Christians share. He disciplines his consumption. He cares for creation. He’s an advocate for intelligent, creative, and compassionate use of city space. He spends time talking with homeless people near the coffee shop where he works.

Do I think Tyler should become a follower of Jesus? Absolutely. In fact, I sometimes joke with him that it’s only a matter of time until this becomes a reality. I hope and pray that day comes. But until then, I will continue to affirm the goodness and wisdom I see in how he lives. I will continue to commend him for thinking hard about life. I will, with gentleness and respect, continue to give a reason for the hope I have – so one day, perhaps, some of the truth and beauty I have discovered in the Christian story will commend itself to him.

And I will continue to be open to having my own thinking and living challenged by my atheist/agnostic friend. I will remember that one of the reasons we have a young adults group at our church is because an inquisitive atheist was looking for somewhere to talk about important questions. I have already learned a good deal from Tyler about consistency between belief and action. He has, perhaps inadvertently, challenged me to be a better follower of Jesus.

Discussing our faith without losing our minds

Out of curiosity and a little bit of boredom i was searching, if there is a consensus or at least some studies on factors that predispose canadian people to be so nice and gentle, and i stumble on this page. I’m an atheist and i read this publication and enjoyed more than i was expecting. Im glad to know about this Tyler fellow and how he approach his lack of believe without distorting the social aspect of his being. Also i commend you Ryan not only for writing this but also for your attitude and tolerance towards those that have opinions and believe different than yours and i wish most religious people were like you. I know this was post on 2010 but i created this account anyway just to thank you for a good reading and for reassuring me that there is still religious people out there who see at least some of the flaws we atheist find on religion and religious people. It’s a shame i haven’t found a pastor like you where i live, i would love to assist to a similar study group.