What's New
Through the conflict, life carries on in Ukraine
A FOCUS on Mission
Must Patience Be So Slow?
Harold Jantz: A Heart for the Mennonite Story
Lorlie Barkman: A Life of Creative Engagement
Last Days, First Days
Women in Ministry: Bertha Dyck
January Moment in Prayer “Holy Spirit—Fill Us!”
The Church as the Patient Body of Christ
Advent: Making Much of Jesus: Christmas Day
Home Arts & Culture Apologetics aid to addressing unbelief 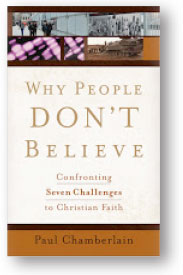 When people of faith take time to understand what their atheist critics say, they are liked to be disturbed, writes Paul Chamberlain, in Why People Don’t Believe: Confronting Seven Challenges to Christian Faith. “The case against religion is unsettling…. I believe it is meant to be so.” But allowing oneself to be disturbed by the gravity of the accusations is the first step toward searching out thoughtful, honest responses that bolster one’s own faith and prepare religious believers to dialogue with people who raise objections to faith.

Director at the Institute of Christian Apologetics and professor at ACTS, Langley, B.C., Chamberlain writes an intelligent and well-articulated addition to the ongoing discussion surrounding Christian apologetics. This book, as its subtitle suggests, is Chamberlain’s response to what are, in his view, the seven most important criticisms of Christian faith that modern atheists have made.

In particular, Chamberlain makes reference to the works of Daniel Dennett, Richard Dawkins, Sam Harris, and Christopher Hitchens, who often stand as the spokespeople for the “New Atheism” movement. This movement reflects a new reality in the wider Western culture that no longer sees religion “as a means to resolve humanity’s deepest problems. Instead, [religion] is increasingly regarded as being the problem, the villain, the culprit of our times.”

Briefly, the seven criticisms Chamberlain addresses are: 1) Religion breeds violence, 2) Religion is irrational and lacks evidence for its claims, 3) Religion is anti-scientific, 4) Biblical morality is appalling and promotes violence, 5) Religious teaching about an afterlife is scandalous and dangerous, 6) Religion engenders intolerance and exclusivity, and 7) Religion leads religious believers to impose religious teachings on others.

The response Chamberlain makes to each of these points is respectful and nuanced. The concepts are clearly defined and well-developed, making this volume very readable without simplifying the issues at stake or giving easy, one-dimensional answers.

In developing his arguments against the “new atheist” propositions, Chamberlain relies on biblical texts and contemporary Christian philosophers and theologians like as Alister McGrath and Alvin Plantinga. In his chapter on whether religion causes violence, he cites a number of political and economic writings that argue politics and economics are more often than not the major contributing factors in violence, even when religion seems on the surface to be the primary motivator. These are but a few examples of the depth and breadth of research that buttresses his arguments, along with a healthy dose of simple logic with which he ably deconstructs the “new atheist” arguments.

Chamberlain has written this book with two very different audiences in mind: namely, those who would agree with the seven criticisms (atheists/agnostics), and those who would not (religious believers). For believers, Chamberlain hopes this book will elucidate the criticisms in a way that will convince people of faith to not simply dismiss these concerns as more of the same old anti-religious rhetoric. Indeed, because those criticisms reflect a growing antipathy toward faith in Western culture, believers must take the time to fully understand and take these criticisms seriously. Chamberlain clearly acknowledges his own deeply committed Christian perspective, yet I appreciate his insistence that these objections are very serious, and as such, he is committed to representing these objections as accurately and forcefully as possible.

Though the person of faith is perhaps the primary audience, this book is also aimed at those who are deeply suspicious of faith, with the purpose of providing answers to objections and therefore an opportunity to rethink these objections, as necessary.

Apologetics in general – and all seven specific challenges Chamberlain addresses – have been written about a great deal in recent years; however, Chamberlain’s work is a fresh addition to the debate and a good summation of thicker volumes on these topics. Why People Don’t Believe certainly stands as one of the best books in this category. (The reader should note the material doesn’t engage the issue from a specifically Anabaptist perspective, but clearly embraces an evangelical Christian viewpoint.) It doesn’t resolves all issues (nor could it); Chamberlain expresses his desire for the book to serve as a jumping off point for discussions between among Christians, people of other faiths (whom he invites to write a similar book from their perspective), and those in the “new atheist” camp.

I appreciate the final chapters, which shift away from a specific rebuttal of “new atheist” doctrines and instead focus on enumerating both the positive emphases of the Bible (the call to love, social justice, and internationalism) and the legacy of Christianity (the establishment of orphanages, hospitals, and universities, as well as the abolition of slavery, to name a few). Chamberlain doesn’t shy away from mentioning the many horrendous abuses of religion, but encourages readers “not to judge biblical values and teachings by their neglect or abuse any more than we should judge atheism by the horrors inflicted by Stalin or Lenin.” It’s helpful to remember that history is marked by the legacy of Christian faithfulness making the Western world what it is today.

I wholeheartedly recommend this informative, thought-provoking, and readable book.