What's New
MCC BC and MDS Flood Response and Partnership
Resilient Leadership: Praying against burnout
Boldly advancing the gospel from our knees
MCC sends food and relief to Cubans in...
Robert Dagenais, pastor of the Sainte-Thérèse church, is...
More donated hay needed to help farmers in...
“God’s time was perfect”
Hope and pray every day
Resilient Leadership: The gift of self care
Project Redemption
Home ViewsFrom the community Naked Anabaptists 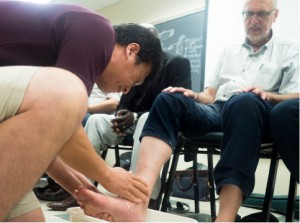 “Do you like the public bath?” asked Yoshifumi Tanaka, my host in Osaka, Japan. I was visiting speaker for the 65th anniversary celebrations of Nihon Menonaito Burezaren Kyodan (Japanese MB conference, JMBC). “Some people are not sure about them.”

I typically trust my host to be the discerning one with such questions. So I put the ball in Tanaka’s court. “What do people think about it here?” Tanaka admitted that non-Japanese visitors might find it controversial, but generally Japanese people – including Christians – enjoy the bath.

Having no clear opinion of my own, and trusting “Yoshi” (a familiar rendition of his name he’s invited me to use), I said, “Let’s go!” And Yoshi introduced me to the rituals and super-hot warmth of the public bath.

I didn’t entirely anticipate that we’d be naked. Of course, everyone was. As we chatted about a wide range of things – personal, church, philosophical – I discovered lots about Tanaka and his church. We thought it might be helpful for him to bring his church board to the public bath to achieve new levels of interaction and trust so they could model intimacy and lead the church more pastorally.

Tanaka and I ended the week with a day dedicated to life-coaching (APEX). We touched on a variety of personal issues and capped off our time with another bath.

During the week, I taught a missiology class at the seminary. I suggested that the nakedness of the bath might be a metaphor for effective witness to Japan’s radically postmodern culture.

One student agreed. She said her family went shortly before. Her husband lives and works in another city, so they only see one another on weekends. Their children in their 20s are beginning independent lives. The bath was helpful for them all.

Trusting my friend’s invitation to a culturally foreign experience led me to a rich learning experience and an insight into helping people follow Christ.

At home in Canada, my next-door neighbour is an older man. When he heard a fellow swearing on the street quite loudly, he responded: “Hey, don’t swear! My neighbour’s a minister!” If this seems amusing, it’s probably because you know that line of logic means virtually nothing to the majority of Canadians. 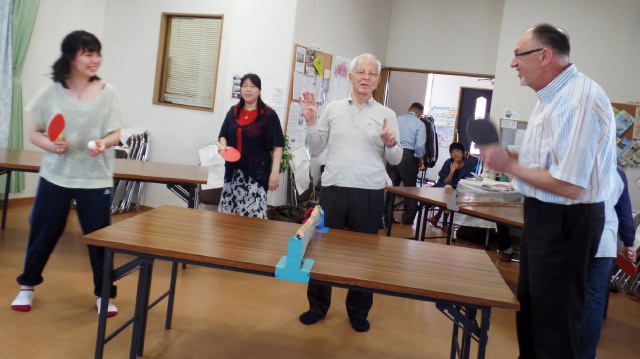 After the Sunday service and a lunch, Hoshida Chapel transforms into a ping pong tournament hall.
Photo: courtesy David Wiebe

Who or what is a minister? Why would that make you watch your mouth? It seems to me that we need to strip down our gospel a bit. Many words and concepts make sense to Christians, but not at all to the average Canadian. One kind of “nakedness” would be to drop the John 3:16 signs at football games and forget the comfortable “assurance of heaven” or even “ask Jesus into your life/heart.”

Maybe there’s no catch phrase at all! Instead, we make ourselves vulnerable and enjoy a relationship. We don’t have all the answers, so we explore spiritual things together with friends who will catch signals of the need to follow Christ. As Anabaptists, we have a 500-year history of following after Christ (nachfolge Christi). This is the centre of the Anabaptist gospel.

Jesus has become real to us in many different ways. Our individual gifts and interests create varied possibilities of mutual attraction with other individuals (1 Corinthians 12). On the foundation of these affinities, we build true relationships characterized by vulnerability. In this context we invite our true friends to follow Christ together with us.

As naked Anabaptists, we completely avoid formulas. Instead, we live real, open lives in which we invite others to join us in the quest to find and follow Jesus. Our vulnerability will show where we struggle – and prevent unrealistic expectations for new followers of Christ.

Our friends may even help us with our questions.

As naked Anabaptists we still carry biblically informed convictions (“truth”)  – but not imperiously or hidden beneath incomprehensible formulas. People want it straight and honest, but in love. The only way to do that is the nakedness of a real, loving relationship.

Whether in a culture like Japan that’s informed by quite a different spirituality or in North America where only vestiges of our Christian past remain in the wider culture, I think our calling is to present our real faith, stripped of the clothing of empire and jargon…in just our vulnerable selves…

…the way Jesus did it.

—David Wiebe has been a member of a Christian rock band, a pastor, and an MB conference executive. Since 2011, he has served the International Community of Mennonite Brethren as executive director. Yoshifumi Tanaka of the Japanese conference describes him as “so tall, but so humble.”

Thank you for your Prayer and wonderful fellowship with JMBC and Canada MB Conference, and ICOMB.