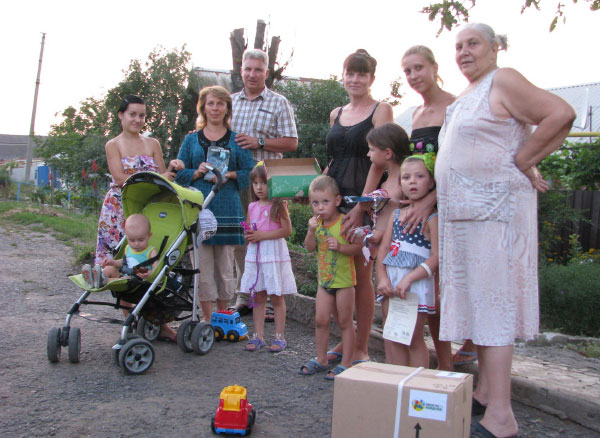 Pastor Grigoriy (third from left) distributes relief supplies to Ukrainians he coaxed out of hiding after their village was shelled.
Photo: Courtesy Roman Rakhuba

There wasn’t a dry eye in the room.

Roman Rakhuba recounted the latest events in his home country of Ukraine to the gathering of Mennonite leaders of Europe in Lisbon, Portugal. Roman leads the Ukraine Mennonite conference, a group of 8 young churches – now, technically 6 Ukrainian and 2 Russian, since Crimea seceded to Russia. The Ukraine churches are in the western half, near the city of Zaporizhia.

Roman and other volunteers bring aid to people living only 200 km away near Donetsk and other communities in eastern Ukraine.

It’s dangerous. One day, they saw some spent ammunition on the side of the road, and stopped. They thought they might grab some “souvenirs.” It turns out they stopped 6 inches from a shell that had buried itself into the roadway. They would have driven over it. No one knows if it would have gone off, but it was a reminder that where ordnance is around, you could be blown up in a moment.

It’s heart-rending. They bring supplies to people whose homes have been hit by shells. Roman met a boy of 11 or 12 who had gone to a neighbour’s home to play. While he was gone, a shell hit his house, completely destroying his bedroom.

Another boy showed Roman his hands. He and his schoolmates fled with their teacher from their school that was being shelled. A blast went off, killing their teacher. The boy fell, covering his head with his hands. A piece of shrapnel went through one hand and into the other, but didn’t get through to his head.

People run to their basements when shells fly. Some are so traumatized, they don’t want to come out. And so Roman and his team go down to coax them out into the sunshine, and to receive the gifts they have brought – food, medicine, water, clothing.

Roman’s stories redefine normal. A pastor housed around a dozen people in his basement during extended shelling. They stayed at his home for days on end – pastoral care of unusual practicality.

His stories are challenging.

The churches held a conference in the beginning of October. Speakers like MB Mission’s European mission development director Johann Matthies inspired and encouraged.

Then they had a business meeting. The agenda: evacuation plans. Where would people go if their community was invaded and they had to flee? The churches stood with and for each other in a time of need.

Three young men from the churches were drafted into the army. They had only two choices: join or spend five years in prison. Alternative service was not an option.

Despite a strong pacifist conviction, the churches released these young men into service in the spirit of Matthew 18: “whatever you loose on earth has been loosed in heaven.” The community hermeneutic of Christians working through a practical issue could be an example for our entire global family.

The wife of one of these soldiers informed the delegation her husband did not have a helmet, flak jacket or winter coat. The army did not provide them. So the assembly raised funds for these tools, reasoning it was not for guns or other offensive weapons.

And Roman’s stories are frustrating.

He showed me a YouTube clip of two tanks in the backyard of a Pentecostal church firing every minute or so at an unseen target. The camera then moves around to show two Orthodox priests (Moscow Patriarchate) with incense, blessing and praying for this activity.

Whether one is pro-Russia or pro-Ukraine in this conflict, Christians would expect their church – in any denomination – to stand aside from such blatant partisanship.

Christians in the free church tradition have convictions about the separation of church and state. Arguably this conviction is nowhere more needed than during a time of controversial state action such as this.

When Roman finished his report, Rainer Burkhardt, pastor and representative of one of the German Mennonite conferences, initiated and led us in a prayer for the churches in the Ukraine. We stood around Roman and laid hands on him, and with tears, we sought the Lord for peace, and for faithful witness by the church in the region.

—David Wiebe has been a member of a Christian rock band a pastor, and an MB conference executive. Since 2011, he has served the International Community of Mennonite Brethren as executive director.

Read the rest of Wiebe’s Witness

Christmas all year-round [in Angola]

Faithful together in civil conflict [Ukraine]

Valentines from Panama: A church in the rainforest

The man in the soup bowl [Southeast Asia]

The power of the Cross(es) [Lithuania]