What's New
Through the conflict, life carries on in Ukraine
A FOCUS on Mission
Must Patience Be So Slow?
Harold Jantz: A Heart for the Mennonite Story
Lorlie Barkman: A Life of Creative Engagement
Last Days, First Days
Women in Ministry: Bertha Dyck
January Moment in Prayer “Holy Spirit—Fill Us!”
The Church as the Patient Body of Christ
Advent: Making Much of Jesus: Christmas Day
Home News The man in the soup bowl

The man in the soup bowl

The power of a transformed story 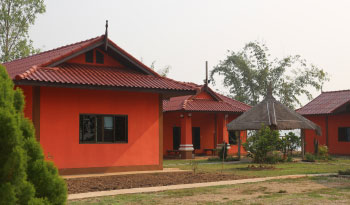 St. Patrick established Christianity in Ireland in the early fifth century by returning to the land of his enemies to bring the gospel, and suffering persecution and deprivation. Tradition holds that he died Mar. 17, 460 AD, now known as St. Patrick’s Day.

Where are the “St. Patrick stories” among the Mennonite Brethren?

Though I haven’t met all of our 450,000 members (give or take) worldwide, I did meet a man whose story has been used to call people to true faith in Christ in a difficult area of South-East Asia.

I first met “Uncle John” in 2012 at a pastor training event in Thailand where some 60 pastors from the Khmu Mission assembled at the Changed Life Center. I used a ReFocusing process – a simple exercise of sketching one’s personal timeline on a sheet of paper and relating that to one other person.

From this story-sharing, we learned that Uncle John had seen a vision of Jesus. In his bowl of soup. 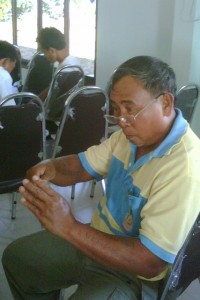 After serving as a Viet Cong soldier in the Vietnam War, Uncle John was looking for direction. His sister had become a Christian and witnessed to him. He resisted.

One day at lunch, somewhat exasperated, she said, “Why don’t you say a prayer for your meal – say anything!”

He took his soup bowl to another room to eat with some friends. Still very skeptical, he followed his sister’s advice with this prayer, “If you are real, show me.” As he removed the lid, a figure materialized, about two feet tall, standing in his bowl of soup.

Everyone in the room saw the apparition and became agitated, worried the unknown figure might be malevolent.

Hearing the commotion, Uncle John’s sister came into the room. She discerned who it was immediately, and said, “Hey, that’s Jesus!”

The image remained for about 15 minutes and then dissolved into thin air. This incident led to Uncle John’s conversion. Presently, he serves as a pastor in one of Khmu Mission’s churches. 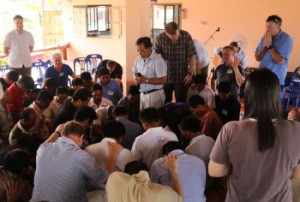 Part of our growing family of Mennonite Brethren suffers persecution like other Christians in regions around the world. Many experience special revelation like this, perhaps as a way of securing their faith. Certainly, many Muslims see visions or dreams of Jesus prior to committing their lives to following Christ.

I have told Uncle John’s story as I visit our global family. In Bavaria, Germany, one pastor shook his head and muttered “Impossible!” under his breath. I asked our Slavic brethren in the U.S. if people had visions of Christ in Soviet Russia, and their response was “Frequently.”

I should also say that individuals have come to me personally after I tell this story to inform me that they have had a dream or vision of Christ.

Thus, such occurrences are not exclusive to those who will suffer for their faith. In Visions and Appearances of Jesus, Trinity Western University philosophy professor Phillip Wiebe demonstrates that there is a virtually unbroken historical record of people who have seen the Lord through visions since the resurrection. Wiebe postulates that these revelatory events – particularly when a multiple number of people see the same thing, but also because of the litany of individuals through the centuries – serve as confirmation of the resurrection. This story has power beyond that of the immediate effects on an individual.

St. Patrick’s story of sacrifice and dedication influenced an entire country. Ireland became one of the top countries sending missionaries for the Catholic church. For Uncle John, his story allowed him to confidently share his faith in the face of opposition, and contribute to the rapid growth of the MB church in that region.

The power of a personal story might resonate far beyond your own sphere of influence. For the Christian, it is a demonstration of God’s handiwork in faith and a transformed life. Many people are not interested in the details of theology or “proving” that God exists, but may be moved by our experiences of God.

God has revealed himself in the story of his people – recorded and canonized in the Bible. It should be an encouragement to us today to continue to share our story and see how God wishes to use it for his glory and purpose.