What's New
Delete or not to delete, that is the...
Believers bring water for drought baptism
Encouragement to those in the arena
Keeping attention and making an impact: A few...
Open hands to reconciliation
From the editor
Approaching truth and reconciliation with love in our...
MB Seminary offers new MA in Transformational Leadership...
Multiply August Ukraine Updates
Book Review of Return Stroke: Essays & Memoir...
Home Arts & Culture Evidence of Jesus 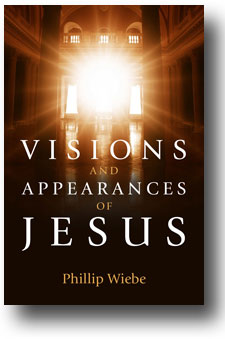 A viable evangelistic strategy in certain unreached areas is to enter a village and ask the locals, “Where is the person who had a vision of a man in white?” So frequent are visions and appearances of Jesus in some regions that this approach will regularly make sense.

Perhaps we are unsurprised to hear of these reports from far-flung parts of our world, or maybe in our Bibles. But do visions and appearances of Jesus still occur in our reality?

For 50 years, Phillip H. Wiebe, professor of philosophy at Trinity Western University, Langley, B.C., has been interested in people who claim to have encountered the risen Jesus Christ. In Visions and Appearances of Jesus, Wiebe compiles reports from the New Testament, the Apocrypha and medieval church tradition. Then, he adds testimonies from 30 individuals, located through advertisements and word of mouth, who report to have had such visions today.

The thesis of his book is quite simple: “A plausible claim to resurrection is dependent upon reliable reports that the resurrected person was seen alive again after death.” Wiebe compiled many of what he argues are reliable sightings: one story for every one to three pages.

“These allegations,” he writes, “put encounters with Jesus into the space-time-causal domain and, if authentic, would challenge the dominance of naturalism within the scientific community.”

Wiebe calls this kind of story “experiential evidence.” He argues that while experimental knowledge has allowed science to blossom, it has become mistakenly privileged over other ways of knowing. While visions and appearances are suspect of being “merely” experiential, Wiebe argues that these kinds of encounters occur far too regularly for the skeptic – or the believer – to reasonably ignore.

Wiebe’s work is helpful in several ways. His research stands in protest against a culture that has largely labelled religious experience as archaic or irrelevantly subjective. Further, he manages to talk about Jesus in a way that meets the skeptic on a kind of middle ground, addressing potential doubts or arguments along the way in contemporary and straightforward language.

I suggest that especially in a post-Christendom era, to communicate the gospel effectively requires a kind of bilingualism: one must be both theologically and culturally literate. This book works toward such bilingualism.

That said, I believe Wiebe has neglected to analyze the reports in significant ways. Wiebe is rather disorganized in the space between stories, flitting between brief comments, theological musings and quick psychological insights. The work is an abbreviation of a more technical work published in 1997 with Oxford University Press; regrettably, some of the most compelling analysis and arguments may have been lost.

I would argue that the most important evidence toward Jesus’ resurrection lies in how his witnesses’ lives are transformed in ways that Jesus predicted: illness and brokenness is healed, justice is restored, faith grows, martyrs are made. Wiebe’s research reflects such transformation and he mentions these effects.

Unfortunately, he spends more time detailing the encounters than highlighting the transformations and what they might mean. It is more difficult to deny a visibly and inexplicably changed life than a subjective report of an encounter.

Overall, the book does important work toward substantiating the reality of the claim that Jesus is alive. Readers are challenged to consider Jesus as a real and engaging person, who existed and continues to engage.

MBs have always sought a personal faith guided by the Spirit, and so should not be surprised to hear stories of Jesus’ ongoing interaction with people. Listening to his witnesses could indeed bear much fruit.

David Thiessen is a graduate of Canadian Mennonite University, Winnipeg, and a member of McIvor Avenue MB Church, Winnipeg. He currently serves as an apprentice with MB Mission Central Canada.