Hope and faith in Lithuania 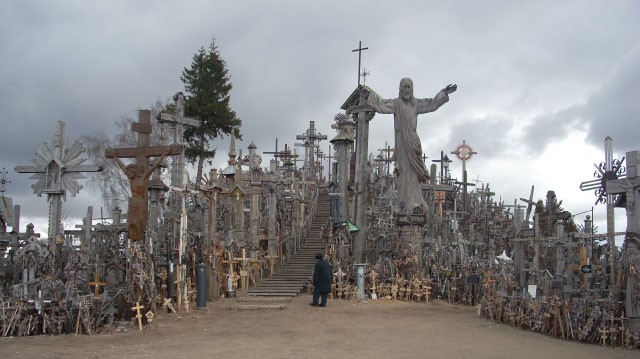 The first time I visited Lithuania, pastor Valdas picked me up from the Šiauliai (pronounced “show-lie”) train station and asked, “You want to see something unique? We have a little time before  our meeting.”

Of course! I was in a new country, eager to learn as much as I can about the new potential ICOMB member, Lithuania Free Christian Church.

What I saw was indeed exceptional. I’m not sure anything like this exists anywhere else. It’s Lithuania’s “Hill of Crosses,” a combination sacred site, folk art exhibit and monument located about 12 km from Šiauliai.

In 1831, the story goes, the first crosses were erected by the next of kin of rebels who fell in a rebellion against Russian czarist rule. Family members weren’t allowed to pay respects at the graves, so they planted crosses on this hill. After another rebellion in 1863, more crosses appeared and a tradition began to form.

The Hill of Crosses became a place to take vows. Stories of an appearance of the Virgin Mary with baby Jesus led to many more cross placements in the 1890s. More than 150 crosses were counted in 1900.

The hill became a location for services and feasts, and many people visited. The number of crosses dropped during World War I, but in 1938, the count reached 400. Crosses were erected by the sick or in memory of the dead, missing or exiled. By 1960, one count estimates 2,500 large crosses – besides many smaller ones.

The Soviet authorities post-World War II did not approve. A demolition period began.

In April 1961, thousands of crosses were destroyed: wooden ones were burned, metal ones taken for scrap and stone or concrete crosses were crushed and used to build roads.

But people began to repopulate the hill at night. Guards were placed on the road to the hill – to no avail.

More demolitions took place in the 1970s. The last was on Mar. 15, 1985. Sometimes the authorities gave the excuse that they were removing crosses “of no artistic value.”

No matter; the Hill of Crosses continued to spring back to life. It became an expression of sorrow, hope, unshakeable faith and yearning for Lithuanian independence.

Today there are an estimated 100,000 crosses – and some guess it’s even higher. That’s quite remarkable since the whole collection was wiped out as recently as 1985.

As I walked through the paths, I could see clumps of small crosses hanging among dozens of rosaries. Gold and silver, acrylic and metal. Crucifixes and empty crosses. Large and small. Old and new.

By now, it’s a tradition for couples getting married to head to the hill and deposit a cross together for good luck. Pilgrims come to express and increase their faith. Even Pope John Paul II visited in 1993.

At Easter, we talk about the power of the cross. In evangelical parlance, that refers to Christ’s authority through his death to save us from sin.

The Hill of Crosses conveys some added ideas of power.

It represents resistance to godless authority and subversion of oppression.

In Jesus’ day, the cross was the Roman symbol of domination. The threat of crucifixion kept many a rebel in check. Jesus not only embraced that form of death, he turned it on its head to become a gateway to salvation and liberty.

The Hill of Crosses demonstrates the power of the people.

One person would never have put up a cross in the Soviet era. But collectively, they were irresistible.

Jesus empowers us to do justice, love mercy and walk humbly before God (Micah 6:8). He especially does this collectively as his body the church has demonstrated through the millennia.

Many of our fellow Mennonite Brethren face terrorists, government oppression or neglect or criminal threats of violence. But we stand together – and with a billion other Christians. This unified force makes the church something the “gates of hell cannot withstand” (Matthew 16:18).

That’s the power of the cross, too.

The name of the Mennonite Brethren conference of Lithuania is “Free Christian Church” (Laisvujų krikščionių bažnyčia – LKB in Lithuanian). LKB’s first churches were established in 1994–1997, but people had been meeting underground in the Soviet area.

LKB is comprised of 7 churches, with a total membership of about 200. Arturas Rulinskas is the bishop, one of three elders who comprise leadership as equals in joint authority and responsibility.

LKB churches have been planted through the work of MB Mission, Eastern Mennonite Mission of Lancaster, Pa., and Kontakt Mission of Germany. LKB accepted and translated the ICOMB International Confession of Faith in 2012–13 and became a member of ICOMB in 2014.

Non-traditional churches are viewed with suspicion in Lithuanian society which struggles with a post-Soviet mindset, alcohol and drug abuse and a very high suicide rate.

LCC International University was begun as a Western-style English language college in 1991. Art DeFehr of Winnipeg led the way, with Johannes Reimer of Germany (who was concerned for Christian education in the newly independent Lithuania), and Otonas Balciunas, a local Christian minister. LCC is the only Christian university serving Eastern Europe and is both a mission and educational enterprise.

The story of LCC can be found in Lithuania Christian College: A Work in Progress, Sarah Klassen, ed., published 2001.