What's New
Through the conflict, life carries on in Ukraine
A FOCUS on Mission
Must Patience Be So Slow?
Harold Jantz: A Heart for the Mennonite Story
Lorlie Barkman: A Life of Creative Engagement
Last Days, First Days
Women in Ministry: Bertha Dyck
January Moment in Prayer “Holy Spirit—Fill Us!”
The Church as the Patient Body of Christ
Advent: Making Much of Jesus: Christmas Day
Home MB HeraldColumns Faithfulness and hospitality after upheaval

Faithfulness and hospitality after upheaval

A story from Peru

“Well, Dave, how brave are you? Are you going to try it?”

My friend and colleague, José Arrais, leader of Associação dos Irmãos Menonitas de Portugal (the Portuguese MB church), posed this question as a plate of ceviche was placed before us. 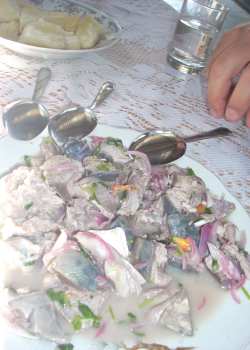 Of course, ceviche is well-known to foodies and is a popular dish in some North American circles.

But this was my first time – and the plate of raw fish accompanied by red onion and other greens in lime juice looked both delicious and “challenging.”

“Absolutely,” I said. “This is their offering to us; let’s see what it tastes like.” And so we dived in.

We enjoyed the hospitality of a young family in northern Peru in the leftovers of a once-large community some 20 km south of Piura.

Years ago, the El Niño phenomenon triggered heavy rains and massive flooding in this part of Peru. Thousands fled to higher ground in the desert on the other side of the Pan-American Highway. These flood refugees, with some government aid, created the villages of Almirante Grau, now hugging the highway just southeast of Piura.

Our group, guided by missionaries Otto Funk and Lowell Ens, visited three MB churches in these villages, pastored by a very young couple, Saúl and Isobel Yovera – graduates of Instituto Bíblico Asunción (the MB Bible college in Paraguay). I stood on a street of sand near their home, looking east. Just a few blocks away, the desert took over.

I could count the visible trees on my hands.

Many farmers in Almirante Grau still operate farms in the fertile district some 5 km away. They travel to their fields but don’t want to move back.

We drove into the flood plain to see what it looked like. It seemed so green in comparison – yet as we passed through empty villages, the full impact of the floods was visible.

But as we rounded a corner, here was a nice-looking, blue MB church! The fertile earth deposited by the flood stretched out from the retaining wall surrounding it. The church is now a metre below ground, with steps down to its main floor. Pastor Jesús emerged from his farmhouse in the adjacent lot to greet us, walking past several tethered animals.

He let us into the little church and showed us the Christian education building in the back, still full of soil deposits. Jesús was staying on in a difficult situation, faithfully leading worship for the few who had courageously returned to their wrecked homes to rebuild and restart. We prayed for him, his family, his congregation and for the future.

And then he introduced us to our hosts who provided the lovely ceviche. This young couple were leaders in the church. He played the keyboard to lead worship. She taught the children. They told us of a miracle of healing for one of their own children. We thanked them for their hospitality and prayed with them. 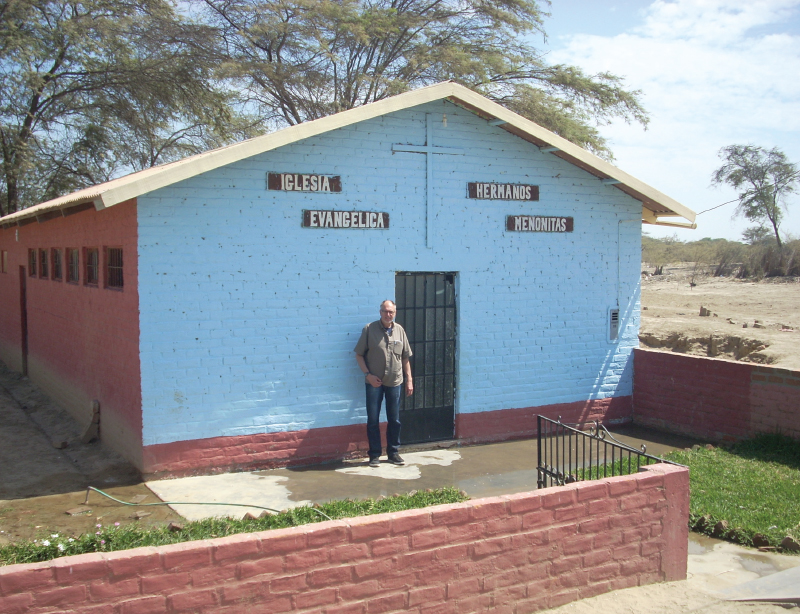 When life throws a curve

It got me thinking. Are we faithful when life throws its curves at us? Do we draw on our ingenuity to create new opportunities? Will we look to God with trust that he will see us through?

I had the sense from my new acquaintances that they were doing all of this. I don’t think they were always happy. Both settings – old and new – offered tremendous challenges. They had to work very, very hard to make it.

Saúl and his wife had had various advantages while in studies in Asuncion, Paraguay, and they weren’t excited at first about their assignment to Almirante Grau. But they surrendered to the calling of God and were faithful. I think the churches in Almirante Grau were growing.

I don’t think the original floodplain MB congregation was growing much. But Jesús and the young couple were leading faithfully, because people seek a living ongoing encounter with God.

Here’s where faithfulness and hospitality meet. We know that people want to meet God, and we use our gifts faithfully to connect them.

♦ Singing and dancing with a water can