What's New
A FOCUS on Mission
Must Patience Be So Slow?
Harold Jantz: A Heart for the Mennonite Story
Lorlie Barkman: A Life of Creative Engagement
Last Days, First Days
Women in Ministry: Bertha Dyck
January Moment in Prayer “Holy Spirit—Fill Us!”
The Church as the Patient Body of Christ
Advent: Making Much of Jesus: Christmas Day
Advent: Making Much of Jesus: Fourth Advent
Home MB HeraldHomepage Hands across the globe: Paraguay

Hands across the globe: Paraguay 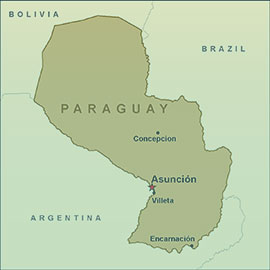 (The German and Spanish Mennonite Brethren conferences of Paraguay)

Paraguay achieved its independence from Spain in 1811. The poverty rate has declined in recent years, but the country still falls below the Latin American average in several socioeconomic categories. Nearly the entire country identifies as Christian, most as Roman Catholic (89.6%), a few Protestant (6.2%) and other Christian groups (1.1%), with a very small number citing no religion (1.1%).

Mennonite Brethren from Dutch/Prussian background began to move to Paraguay via Russia in 1930. They brought their group distinctives from Russia and were granted “ethno confessional” status that allowed, among other things, conscientious objection, by State Law 514.

Theologian Alfred Neufeld says the Mennonites believed God had brought them to Paraguay to evangelize and to meet human need, and so they did. In 1951, Kilometer 81 leper hospital was established with strong support from the MB community. In 1955, they commissioned several couples to begin church planting in Asunción, (and later in East Paraguay), out of which grew the Spanish conference. Mennonite outreach efforts included their aboriginal neighbours, the Nivaclé and Enlhet tribes.

Schools and media have also played a large role for growth and training. Yalve Sanga school has educated indigenous Paraguayans since 1959, and Instituto Bíblico Asunción, which celebrated its 50th anniversary this year, has trained many pastors and leaders not only in Paraguay but throughout MB conferences in Latin America. Horst Bergen coordinates an education commission that oversees 4 “school churches” – churches planted within the schools operated by both Spanish and German MB conferences of Paraguay. The 2 conferences collaborate on a gospel radio ministry OBEDIRA (OBra Evangélica de DIfusión RAdial), started in 1986. The programs point people toward Christ and teach a strong social ethic for the good of the country as a whole.

PRAISE GOD for the 50th anniversary of IBA, the post-secondary Bible training school that equips leaders for ministry all over Latin America. Pray for director Victor Wall and other IBA leaders as they design a new campus.

PRAISE GOD for opportunities the government and society afford to evangelize and serve, and for many opportunities to learn from other Christians. Pray that the churches would recognize God’s call and discern his leading to opportunities both to serve and learn in ways that are healthy for the churches and work with his timing.

PRAY for the unique evangelism ministries, like OBEDIRA, and for La Libertad, a church in prison. Several mainstream MB churches in Paraguay support La Libertad, a congregation that is expected to permanently require their financial assistance as it wins convicts to Christ, disciples them and trains them for meaningful employment upon release. Pray for spiritual and practical wisdom and discernment for the leaders.

PRAY that the churches of Paraguay would hear God’s call to get more involved in world mission.