What's New
Leading through the trauma of covid: Part two...
Ask God which town
Where to from here?
CCMBC National Director attends 2022 ICOMB Summit
MCC Canada and MCC Manitoba sell shared property...
The world appears to be growing darker
Sharing a new and unified language
6 reasons to attend the MWC Global Assembly...
One too many
Just one more
Home MB HeraldHomepage Hands across the globe: Uruguay

Hands across the globe: Uruguay

(Council of MB congregations in Uruguay) 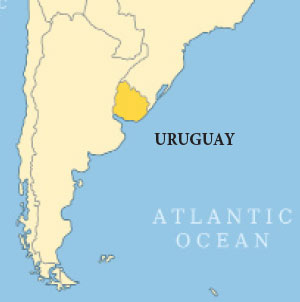 Uruguay was founded by the Spanish in 1726 as a military stronghold and is today the most “European” of South American countries both by its population (88% white, 8% mestizo, 4% black) and its social makeup (a secular state with well-developed social security, health and educational systems). Roman Catholics comprise 47% of the population, non-Catholic Christians 11%, those who identify as spiritual but not religious 23%, atheist or agnostic 17%.

Mennonite Brethren arrived in Uruguay in 1948 as German-speaking settlers from war-ravaged Europe and organized themselves in colonies. The first MB church was established on the Volendam (steamer) in 1948 prior to landfall.

The Mennonite Brethren in Uruguay are committed to outreach. In the 1960s, the Board of Mission and Service sent Spanish- and German-speaking workers Daniel and Elsie Wirsche to serve in outreach and church planting. The German MB organization was shuttered in 1979, but the Spanish MB church continued to grow slowly in the cities. They established a retreat centre and participate in a small Bible school.

Praise the Lord for the strength of unity among the seven fellowships who meet regularly and encourage each other.

PRAY for emerging leaders. Pastors are aging and the conference is small.

PRAY for the school’s plans to build a video-conferencing network with other Spanish-speaking conferences to expand its course offerings.

PRAY for the missional spirit to produce fruit. The congregations desire to develop church plants and to reach out in mission. One member currently serves internationally with MB Mission’s Team C4.

Can you please tell me what cities have MB churches in Uruguay? We presently attend Gospel Chapel in Grand Forks BC Canada and are researching retiring in Uruguay. Thank you.

Dona, according to my information, there are several congregations in Montevideo, one in San Javier, and one in Gartental. Find out more: http://icomb.org/conf_uruguay.