What's New
A FOCUS on Mission
Must Patience Be So Slow?
Harold Jantz: A Heart for the Mennonite Story
Lorlie Barkman: A Life of Creative Engagement
Last Days, First Days
Women in Ministry: Bertha Dyck
January Moment in Prayer “Holy Spirit—Fill Us!”
The Church as the Patient Body of Christ
Advent: Making Much of Jesus: Christmas Day
Advent: Making Much of Jesus: Fourth Advent
Home MB HeraldHomepage Hands across the globe: Peru

Hands across the globe: Peru 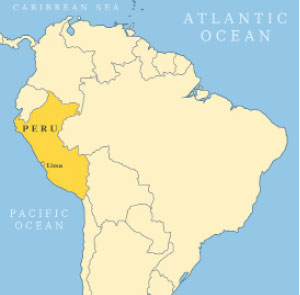 Official language of Peru: Spanish; indigenous languages recognized in regions where they predominate

A country of diverse ethnicities, Peru is home to the famous ancient city at Machu Picchu. The earlier Moche civilization (builders of Huaca del Sol temple) still exerts spiritual influence on the northeastern coast where Mennonite Brethren churches are located.

Krimmer MBs started Bible translation work in the eastern jungles in the 1950s. In 1983, severe flooding in the Piura region brought MB mission workers to northeastern Peru under diplomatic visas. Disaster aid – soup kitchens and medical clinics – opened doors to Bible studies with local workers and the development of Sullana MB Church which celebrated its first baptism in 1985 on the historic MB date Jan. 6. Almost 30 years later, it has 125 members. In the 1990s, efforts began to evangelize in professional classes and to nurture national leadership. A church was started in Lima, the capital city, in 2003.

PRAY for Saul Yovera of Piura and Ronald Chauca of Lima who were newly elected president and vice president of the MB conference leadership council. These theologically trained pastors plan to develop training programs and to build capacity in existing leaders. They already carry a heavy load in their churches.

PRAY for a potential June learning exchange with leaders from the Panama MB conference on reaching out to indigenous people moving into urbanized centres.

PRAY for unity in the team of MB conference leaders, wisdom for the expatriate missionary counsellors and strong connections with the MB community worldwide.

PRAY for increased desire for church planting and mission, both in the coastal cities and the remote interior areas.