What's New
Leading through the trauma of covid: Part two...
Ask God which town
Where to from here?
CCMBC National Director attends 2022 ICOMB Summit
MCC Canada and MCC Manitoba sell shared property...
The world appears to be growing darker
Sharing a new and unified language
6 reasons to attend the MWC Global Assembly...
One too many
Just one more
Home News Miracle at a board meeting 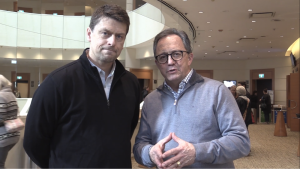 “I’ve seen healing before, but I’ve never seen a ‘pick up your mat and walk’ healing like this; that was a highlight for me,” says Bruce Enns, moderator, about the executive board’s meeting.

The Executive Board of the Canadian Conference of MB Churches met in B.C., Feb 5–6, 2018. It’s a time of transition: the board heard reports from ministries that have closed (L2L), migrated (C2C), and changed structure (Legacy), then received a presentation from the One Mission Partnership Task Force on change for CCMBC itself. 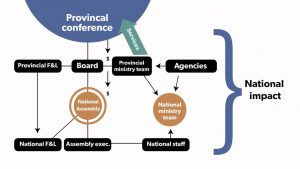 The task force delivered their recommendation, referred to as the collaborative model, wrapping up their work of exploring how a variety of MB-related organizations can work more closely together. (See video here.) “The model puts the provinces at the centre of it all,” says Enns. “The national role is to collaborate across provinces but not offer programs.”

“Everybody signed off on this proposal, knowing it needs more, but the basic structures were improved by the whole group,” says Enns, indicating the report reflects years of consultation reaching as far back as the 2011 National Office Review by Terry Mochar. 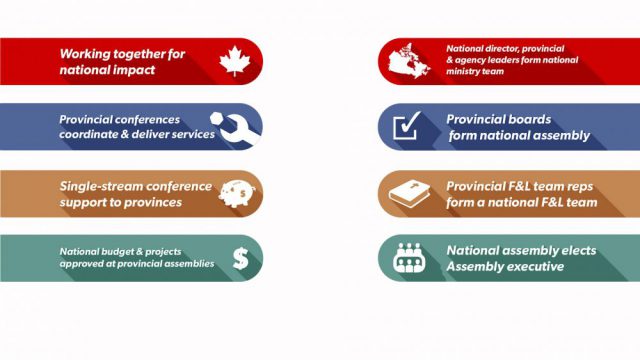 Local task force members will be present at the upcoming provincial conventions to present the task force recommendations, answer questions. This information dispersal and gathering will likely be followed by a public conference-call “question and answer” session before a revised proposal is brought to Gathering 2018 in July, says CCMBC executive director Steve Berg.

How the Board of Faith and Life, which also met in early February, will relate to the executive board under the collaborative model is still being worked out. In the new structure, “the BFL is critically important,” says Enns; “it will have a heightened importance.” 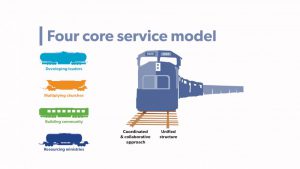 The task force recommendations reflect trends revealed in the MB survey, conducted in December. Presented by CCMBC director transitional support J.P. Hayashida, the survey results are available here. A breakout session at Gathering will offer attendees the opportunity to examine and interpret the results.

The Executive Board appointed Karen West, Howie Wall, David MacLean, and Steve Berg to guide the search process to hire a national staff leader when the interim executive director’s term ends in July.

And the miracle? Berg had been suffering from vertigo for months, an strangely fitting metaphor for the “off-balance” feeling in this time of change for Canadian MB churches. As the board stood and sang the doxology to close the meetings, Berg found himself able to stand without aid, and sing through a throat raspy from medication.

Marvelling at the release of healing during a moment of worship, Enns says: “That’s what capped it off: Steve walking around the room, praising God.” 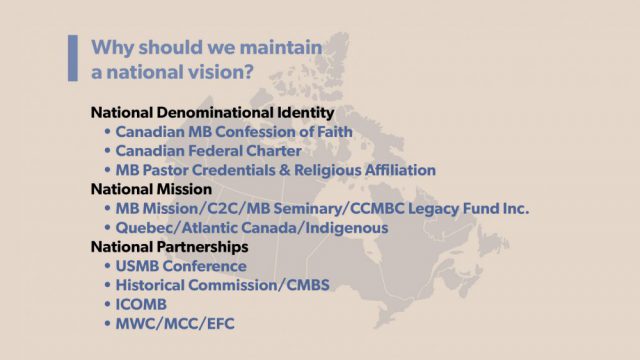 A model for ministry

Thankyou MB Herald for keeping the constituency informed on where things are at. I am a visual learner so I appreciate the visual models used to describe our trajectory. From a systems approach I find the models lack some clarity regarding the relational dynamics – these are often summarized by arrows and connectors but at a day-to-day level can be the practices that keep the system alive. I offer here a couple of examples of relational “connectors” or practices of the manner in which energy/information/inspiration moves through the body of Christ: 1) Engaging our identity and diversity by facilitating dialogue and feedback, this includes resolving (even transforming!) conflict when it occurs, and 2) Passing on the vision of who we are as MB’s, and the development of leadership capacity (via mentorship, coaching, etc) and spiritual gifts for both lay and clergy. I’d love to see us explore some visuals for these relational elements!