What's New
A FOCUS on Mission
Must Patience Be So Slow?
Harold Jantz: A Heart for the Mennonite Story
Lorlie Barkman: A Life of Creative Engagement
Last Days, First Days
Women in Ministry: Bertha Dyck
January Moment in Prayer “Holy Spirit—Fill Us!”
The Church as the Patient Body of Christ
Advent: Making Much of Jesus: Christmas Day
Advent: Making Much of Jesus: Fourth Advent
Home News USMB resumes conversation on women in pastoral ministry 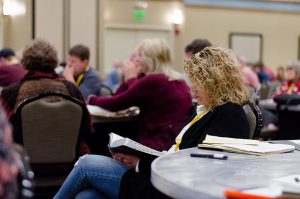 No decisions were made when more than 140 Mennonite Brethren gathered in Phoenix, Arizona, Jan. 14–16, 2019, for the U.S. Board of Faith and Life (BFL) study conference on “The Bible and Women in Pastoral Ministry.” That’s because the purpose of the study conference was not to take action but, after a 20-year hiatus, to resume conversation around women in pastoral ministry.

When U.S. Mennonite Brethren last discussed women in pastoral ministry in 1999, they passed a resolution that women be encouraged to “minister in the church in every function other than the lead pastorate” and that women would be invited “to exercise leadership on conference boards, in pastoral staff positions and in our congregations, institutions and agencies…as gifted, called and affirmed.”

At the time, some people viewing the language as too restrictive and others as not restrictive enough. It became apparent during the 2019 study conference that U.S. Mennonite Brethren remain as divided on the issue as they were two decades ago.

The study conference began Monday evening with an historical overview of how Mennonite Brethren have involved women in church ministry.

Valerie Rempel, interim vice-president of Fresno Pacific Biblical Seminary traced the changes and denomination conversations about the role of women that began in the early 1970s. 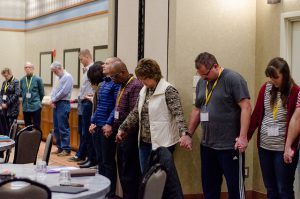 Larry Martens, former Fresno Pacific Biblical Seminary faculty member and president, led a study of Acts 15 that outlined six steps the early church took that led to a mutually agreeable solution to their disagreement, beginning with a willingness to engage in a difficult conversation about theological issues.

In the final presentation, Doug Heidebrecht looked at how the global Mennonite Brethren church is responding to women in ministry. Heidebrecht, on staff with Multiply, is director of global training at MB Seminary and a member of the Canadian Conference of MB Churches (CCMBC) Board of Faith and Life.

“Decisions made around the globe regarding women in pastoral roles are at least partly shaped by the historical backgrounds and the cultural contexts of those conferences,” he said. “This calls us to reflect critically on how our experience in a certain cultural context influences and shapes our interpretation of Scripture.”

After the presentations, participants were given 10–15 minutes to ask questions of the speakers. Table groups discussed together, then reported on their conversation at an open mic.

“It was clear that there were strong feelings and convictions on either side of the question – stemming from hermeneutical approach as well as personal experience. However, I was particularly encouraged by open-mic declarations of determination to find a God-honouring way forward together,” says Ingrid Reichard, Canadian national faith and life director. 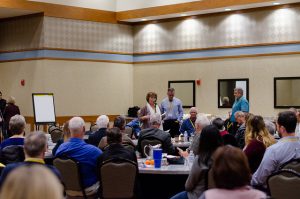 “Our BLF contingent commends our USMB brothers and sisters for their willingness to open up this discussion.”

In a Jan. 29, 2019, follow-up email to participants of both the study conference and webinar, the U.S. BFL outlines what can be expected from the board moving forward and invites the USMB family to share feedback.

The U.S. BFL will meet Mar. 27–28, 2019, “We don’t have a specific timetable for [a proposal or conclusion],” the board writes. “We do intend to let you know if any decision about process is made. We will try to be timely with that, but we ask for your patience as we listen to how God is leading us.”

Connie Faber is editor of Christian Leader, the magazine of the US Mennonite Brethren conference. Read this complete report: https://christianleadermag.com/u-s-mennonite-brethren-resume-conversation-on-women-in-pastoral-ministry/