What's New
MCC BC and MDS Flood Response and Partnership
Resilient Leadership: Praying against burnout
Boldly advancing the gospel from our knees
MCC sends food and relief to Cubans in...
Robert Dagenais, pastor of the Sainte-Thérèse church, is...
More donated hay needed to help farmers in...
“God’s time was perfect”
Hope and pray every day
Resilient Leadership: The gift of self care
Project Redemption
Home Arts & Cultureart A persistent influence

Women throughout history with a passion for God

When I think about great theologians, philosophers, missionaries, and politicians, it is often men’s names that come to mind.

My church tradition of origin does not include women as official members of the clergy, so my experience of women in pastoral roles is limited as well.

Even the amazing women of Scripture can often be forgotten and passed over in favour of better-known stories.

This has always frustrated me.

I felt burdened by my own ambitions and desire for full involvement both within the church and in the world at large.

For a long time, I believed I would have to blaze my own trail and upend the status quo in order to achieve my goals. It was an exciting thought, yes, but also a daunting prospect.

Working on the HERstory exhibit has helped me to understand that the women of my generation do not have to claw out a place for themselves from scratch. Rather, we stand on the shoulders of martyrs and mystics, political activists, adventurers, and artists from all walks of life.

The exhibit highlights just a few of the incredible women who pursued the calling of God in their lives with an integrity and passion that demanded recognition even in periods much less empowering toward women than our own. One of them, Hildegard von Bingen, has been a personal inspiration to me. 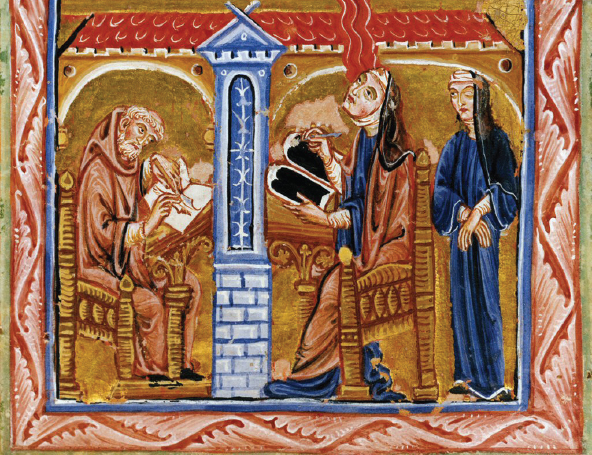 This 12th-century abbess wrote books, plays, and hundreds of musical compositions, leading her community in creative worship of God. She experienced visions all her life, but it wasn’t until she was in her 40s that she shared her visions. She heard an audible call to write, then spent months of internal debate before recording her visions in Scivias. Her works, preaching, and correspondence with political and religious leaders gave her significant lasting influence.

Hildegard’s courageous lifestyle of faith and holistic view of spirituality and worship inspire and challenge me to seek out a more personal, tangible relationship with the God who interacted with her and continues to move among his people today.

Though their lives are unfortunately unknown to many, women like Hildegard have left a persistent influence on their own traditions of faith, the church as a whole, and society at large.

Each of the women featured in the HERstory exhibit brings unique perspectives that are influenced by the socio-spiritual reality of their femininity as they reflect the nature of God.

I believe that it is incredibly significant for the church to understand the beautiful legacy of women throughout the ages, adopt their passion for the heart of God, and inspire future generations of men and women to empower one another toward better serving our Lord, the church, and the world around us.

is a student at Columbia Bible College who has both volunteered and worked in the Metzger Collection. She was particularly involved in helping to prepare the HERstory exhibit.