What's New
Delete or not to delete, that is the...
Believers bring water for drought baptism
Encouragement to those in the arena
Keeping attention and making an impact: A few...
Open hands to reconciliation
From the editor
Approaching truth and reconciliation with love in our...
MB Seminary offers new MA in Transformational Leadership...
Multiply August Ukraine Updates
Book Review of Return Stroke: Essays & Memoir...
Home Arts & Culture Serving Christ through storytelling

A new graduate from California Institute of the Arts in 1984, Ron Reed soon discovered a disconnect between his faith and his experience as an actor. He wanted to act, but not just in any show; the play mattered more than his particular role in it. Reed wanted to be part of a theatre where he “would be free to explore work having particular meaning to him as a Christian.” So, together with several like-minded actors, he gave birth to Pacific Theatre, which has grown into one of the gems of Vancouver.

“Pacific Theatre exists to serve Christ in our community by creating excellent theatre with artistic, spiritual, relational, and financial integrity,” declares its mission statement. “Serving Christ” through theatre is multifaceted, says Reed. It means creating a sense of community by giving opportunity to those who would not necessarily have it elsewhere, and helping young, aspiring actors explore their faith and craft through a year of internship. It means some plays are about Jesus, while others never mention Christ, but ask hard questions about faith, truth, and love. Serving Christ is a mandate that directs every decision at Pacific Theatre, small and large.

Pacific Theatre doesn’t shy away from portraying the gospel story directly through works such as The Cotton Patch Gospel (which culminates with the resurrection). However, Reed believes the gospel story means more in light of difficult experiences in life and the hard things of the gospel itself. “Before we can tell the happy ending of the gospel as resurrection,” Reed quotes Frederick Buechner’s book Telling the Truth: The Gospel as Tragedy, Comedy and Fairy Tale, “we have to tell the tragedy of the crucifixion.” Sometimes the plays Pacific Theatre selects portray the dark side of the human condition because it causes the audience to ask questions and explore their own internal condition.

Telling stories that raise questions or cause the audience to empathize with a character they would never consciously identify with is what theatre does best, says Reed. Stories are powerful tools because they inform the way we perceive our lives and our choices about the kind of people we’ll be. Pacific Theatre is willing to dive into what it means to be human and what it means to be spiritual – no topic is “off-limits” as long as the play asks the right questions and doesn’t misrepresent how the world works.

A person doesn’t need to be a Christian to work at Pacific Theatre in any capacity from technician to actor. However, Reed always asks what draws an applicant to the company, and ensures all participants understand the theatre’s mandate. Through this open policy, some have discovered faith, some have rediscovered a dead faith, and some walk away with no interest in faith at all.

The one-man show Damien was a personal highlight, where theatre had a deep impact on Reed’s faith. He first portrayed Father Damien, a priest who ministered to lepers on the Hawaiian island Molokai, on the 100th anniversary of Father Damien’s death. The play, set on the day he died, April 15, 1889, explores the “call within the call” Damien heard when he first saw the lepers at Molokai.

As Reed portrayed Father Damien, he felt God speaking to him that the theatre was his own “call within the call.” Reed felt a sense of affirmation. He performed the play again in 1994, at a difficult time both personally and professionally. Every night, Reed says, some part of the play would speak to him and remind him of that call. Prior to portraying Damien again in 2001, Reed spent two nights in Molokai, and stood in the church Damien built. This brought a new depth to Reed’s acting experience.

The mandate to serve Christ is evident in Pacific Theatre’s line-up: plays that speak, inspire, confront, and put to question the human experience and the life of faith. This season’s plays, opening with The Spitfire Grill, Sept. 21, will touch the hearts and minds of the audience. “Second stage” shows are also well worth catching, especially Christmas Presence, which has an extended run this year. 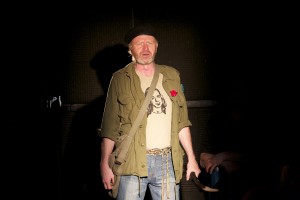 Things are not as they seem in side-splitting...

Is charity ever selfless?