What's New
Multiply September Ukraine Updates
Volunteers in B.C. honour Leamington woman tragically killed...
Delete or not to delete, that is the...
Believers bring water for drought baptism
Encouragement to those in the arena
Keeping attention and making an impact: A few...
Open hands to reconciliation
From the editor
Approaching truth and reconciliation with love in our...
MB Seminary offers new MA in Transformational Leadership...
Home Arts & Culture How do you solve a problem like Blake? 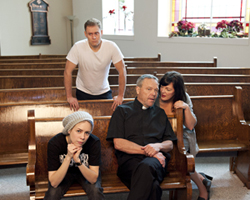 “It’s hard to leave justice to a God that turns the other cheek.” This line offers a taste of the honest, fearless questions Lucia Frangione’s Leave of Absence asks.

Leave of Absence premiered Jan. 25 to a sold-out audience at Vancouver’s intimate Pacific Theatre (the alley-style performance space seats 128). The promise of a hard-hitting and potentially controversial exploration of a community’s reaction to a situation regarding sexuality had the audience feeling slightly anxious and excited as the lights dimmed.

The set is simple, with minimal costume changes and no set changes. It was obvious that the playwright and director shared a common vision of focusing on the dialogue and the exploration of character rather than impressive staging. This allows the audience to use our imaginations and pay closer attention to the emotional and spiritual mindset of the characters.

The play opens with the protagonist Blake (Karyn Guenther, a member at Bakerview MB Church, Abbotsford, B.C.) who immediately manifests her edgy and against-the-grain worldview through a heated argument. The 14-year-old struggles with the loss of friends, the onset of bodily changes, the absence of a father, and the many idiosyncrasies of her loving but narcissistic mother.

Instead of spinning a dramatically evolving plot line, Leave of Absence follows Blake in her daily struggles, portraying the ways four people in her life (priest, principal, mother, and church handyman) reacted to those struggles. The chief concern is Blake’s same-sex attraction and unhealthy attachment to her childhood friend Tracey – an attraction most characters label as “sexual confusion.”

All the characters have a deep love and compassion for Blake, but the manner in which they show this affection is dramatically different. A busy-bodied mother, a hypocritical-but-well-meaning principal, and a tired priest respond to Blake in what they believe to be the most appropriate way. The diversity of reactions leads the audience to wonder, “In a similar situation, how would I respond?”

Physically, the play revolves around the ever-occupied office of the resident priest Father Ryan at Blake’s Catholic junior high school. A better mentor for Blake than her own mother, he’s a pillar of reason and a voice of unapologetic honesty in Blake’s life. Blake knows her Sunday school answers, and she is aware of the trouble her quiet rebellion against the traditional church causes him. Despite this, she’s comfortable enough to be sincere with him.

From the opening scene to the standing ovation, the theological banter is thick. The script is brilliant in its ability to use conversation to address complex ideas most playwrights would explore through extensive monologues. The subject of sexual orientation takes the spotlight; however, many other issues concerning the church also are explored: women in church council, the adolescent irreverence toward time-honoured liturgy, the ironically titled issue of pastors taking a “leave of absence,” the unending conversations around homosexuality in church and school systems, and the exploration of mystical worship. 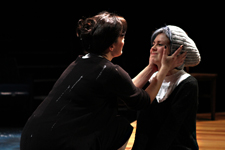 The simple staging enables several instances of creative layering – characters concurrently speaking, singing, or pantomiming in two separate scenes – during the two-hour performance. Although challenging at times, it gives the feeling of being inside the characters’ heads.

This dissonant mix of comedy, heartbreak, miscommunication, sudden plot twists, fast-paced scenes, and raw passion has the audience experiencing almost every emotion on the spectrum. The plot trajectory isn’t obvious; yet a mood of expectancy that a solution to Blake’s behavioural challenges will emerge lends coherence and suspense to the dialogue-driven story. Is expulsion from school the answer to her rebellious and destructive behaviour? How ought Blake to understand God’s will regarding her homosexual orientation? Does Blake’s situation stem from a legitimate dilemma or an adolescent cry for attention and love? Whose ideals will triumph; will passion defeat reason? These questions, along with a growing love for the characters, enables the audience to be fully engaged from the get-go. 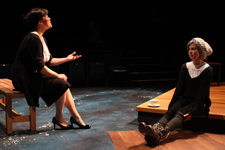 This production confronts your foundational view and tests theological standpoints you’ve deemed safe and comfortable. Be prepared for a thought-provoking experience and come with your guard down. This show is a prime example of using art to further discussions on taboo topics. When the lights come up after an unexpected resolution, limits have been tested, held-off plans have been enacted, and the audience has been led to empathize with several perspectives. Knowing the playwright drew from personal experience in her writing, and then seeing her in the role of the mother, Greta, added an extra touch of life.

For some, Leave of Absence will be hard to swallow, and for others it’ll be something to chew on, but everyone will leave with a new and different taste in their mouths.

Nataly Wiarda is a second-year worship arts student at Columbia Bible College, Abbotsford, B.C. She participated heavily in her high school drama productions in Belleville, Ont., and has tried her hand at acting, directing, writing, stage managing and costume designing. Her favourite productions so far have been Salt Water Moon and A Midsummer Night’s Dream. She shares equal passions in all area of theatre.