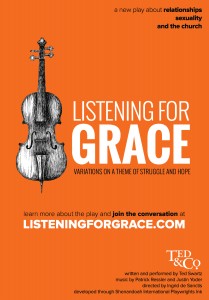 Can fiction create a conversation where study has led only to argument? Some 20 MB and Mennonite church members sponsoring a presentation of Ted Swartz’s play on relationships, sexuality and the church at Mennonite Brethren Collegiate Institute, Winnipeg, Nov. 11, 2014, hope the audience will come to listen.

Listening for Grace: Variations on a Theme of Struggle and Hope is created and acted by the U.S. Mennonite actor and humourist. Swartz plays five different characters, based on interviews and stories from same-sex attracted individuals and their families. Swartz’s play does not promote an agenda, explains the show’s website, but “teaches the transformative power of listening.”

The Mennonite Brethren conference has heard theological teaching on homosexuality at the board of faith and life’s “Honouring God with the body” study conference Oct. 16–18, 2013, and will continue to explore the subject at the “God, Sex and Church” study conference in 2015.

Swartz’s format isn’t a theological study or discussion. “Plays touch on the emotions,” says Manitoba MB conference pastor Keith Poysti. The conference is not endorsing the play; however, “It’s good for us to listen and hear respectfully,” says Poysti.

John Unger, retired pastor of Fort Garry MB Church, Winnipeg, who is part of the sponsoring group, see the play as “a way to help the church begin to listen to one another.

“It seems such a polarized conversation. [Listening for Grace] kind of pulls it apart and gives voice to five different perspectives,” including a father who learns his son is gay, a deacon, and the son himself, says Unger. He hopes the play is not taken as propaganda, but a nudge to ask, “Where is God’s grace among us in this whole story?”

“Since the [study conference], my wife and I have had a constant stream of people approaching us with their stories.” Unger shared there about his own experience as a father of an adult who experiences same-sex attraction. He receives calls from church leaders on the subject and even had a stranger approach him in a hardware store.

“We’ve not been good listeners around this whole conversation,” says Unger. “Listening has to do with maintaining relationship.” He observes that, for the parents of same-sex attracted children who comprise the sponsoring group, “you can count on one hand or less the number of children who have come out as gay or lesbian or transgender who are still in the church in some way. Many of us don’t know a single gay or lesbian person in our churches – because they’ve all left or are in hiding.”

When people experience same sex attraction, “you come smack up against suffering,” Poysti says. “But to think we can live without suffering as Christians is ridiculous.”

“I don’t know that we’re going to change anybody’s mind on anything,” says Unger, “except perhaps to open up the space for conversation to say, ‘you’re still my brother, my sister. I disagree with you, but I hear some of your story.’”