What's New
A FOCUS on Mission
Must Patience Be So Slow?
Harold Jantz: A Heart for the Mennonite Story
Lorlie Barkman: A Life of Creative Engagement
Last Days, First Days
Women in Ministry: Bertha Dyck
January Moment in Prayer “Holy Spirit—Fill Us!”
The Church as the Patient Body of Christ
Advent: Making Much of Jesus: Christmas Day
Advent: Making Much of Jesus: Fourth Advent
Home MB HeraldHomepage Small steps in our stories reveal God

In the family of God, we never stop growing. The Board of Faith and Life invites MB churches to delve deeper into discipleship together at EQUIP Study Conference 2017. Glencairn Church, Kitchener, Ont., is getting an early start.

April–December 2016, Glencairn began a discipleship program geared toward mature believers. Led by pastor Ingrid Reichard, the first round of “3 Years with Jesus” brought together 20 adults aged 45–79 in three small groups to write their spiritual autobiographies. “The story-writing process helped me forgive myself
for choices I regretted,” says participant Jan Adams. “I caught a glimpse of how God perceives me” – with love.

Sharon Jordan was amazed: “Things I’ve worked with all my life in others I did not see happening inside myself.” The 75-year-old therapist realized not having a mother present during her first years of life had led to separation anxiety. Through writing, “I saw how God attached me to his side and brought healing.”

“There were events and sins in my life that I would rather remained in the past,” says Bruce Jordan, Sharon’s husband. “However, I was continually surprised
during the process to see God’s hand throughout my life in many small ways, cumulatively having a greater spiritual effect than the milestones when God was
clearly ‘on the scene.’”

Ingrid reminded them the task of hearing stories is sacred.

“Watching the transformation in other people was so rewarding,” says Sharon. Sometimes participants gave profound feedback: “a divine appointment for the rest of us.”

The groups will resume for Year 2’s “Life Change” focus in September 2017, followed by Year 3 in September 2018, centred around intentional intercession and a mission trip. 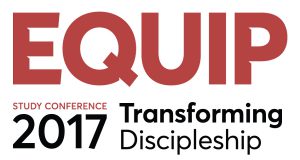