What's New
MCC BC and MDS Flood Response and Partnership
Resilient Leadership: Praying against burnout
Boldly advancing the gospel from our knees
MCC sends food and relief to Cubans in...
Robert Dagenais, pastor of the Sainte-Thérèse church, is...
More donated hay needed to help farmers in...
“God’s time was perfect”
Hope and pray every day
Resilient Leadership: The gift of self care
Project Redemption
Home Arts & Culture How to live a “with God” life 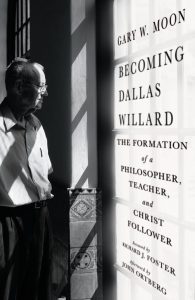 Becoming Dallas Willard: The Formation of a Philosopher, Teacher, and Christ Follower

If you think you know Dallas Willard, you might want to think again. In his thoroughly well-researched and narratively delivered biography of the late Dr. Willard, Gary W. Moon attempts to unearth the formative experiences on and lasting influence of this philosopher, educator, author, and gentle spiritual giant. Moon traces the tragedies and hardships of Willard’s early life and his discovery of robust metaphysical realism in the works of philosopher Edmund Husserl to help the reader understand why Willard was so capable of helping the rest of us comprehend complex concepts like the Kingdom of God and how we can interact personally and meaningfully with realities such as the Holy Trinity.

Moon directs the Dallas Willard Center for Christian Spiritual Formation at Westmount College, Santa Barbara, Cal. He has a personal as well as professional interest in Willard as a mentor and key influencer in his own spiritual journey.

Moon is particularly interested in helping those who came to know Willard as a philosopher connect with him as a disciple of Jesus and those who know Willard only as a Christian author connect with his life in the academy. This blend makes the book feel a tad disjointed at times but also proves to be a strength in painting a robust and realistic vision of Willard’s contributions to both spheres.

In the past decades, Dallas Willard published definitive literature on spiritual practices and formation in the North American evangelical church. Echoes of his thinking can be found from mega-church pulpits to Ignatian retreat centres. Mentee and friend John Ortberg notes that “In the church, [Willard’s] impact was surprisingly wide, but more noted for its depth than its breadth” (256).

Moon wants to help the reader understand how Willard became that mature and wise person. His journey from rural Missouri to the philosophy department at University of Southern California is surprisingly ordinary – but that is exactly the point. In some ways, this is more a book about how a person can live a “with God” life than it is a tribute to Dallas Willard.

Intersection with the MB Confession of Faith

Part of our confessional and historical identity calls each of us to live out our faith and not simply mentally affirm a set of presuppositional truths. Willard’s books like Renovation of the Heart lay out a model of the human person and Christian spiritual formation that flows out of this stream. His works The Divine Conspiracy and Spirit of the Disciplines give us useful and signposts that are both pietistically possible as well as philosophically congruent in our growth as disciples. Here was a person who “not only taught about the spiritual disciplines, he also became a different person because of them.” (dust jacket)

I have read most everything Willard has ever written, yet I found much here that surprised me. The integration of epistemic realism, Willard’s own private spiritual life and his public teaching is fascinating to explore for both those familiar with his work as well as those who have never read anything by him.

That his attempt at pastoral work alongside Richard Foster was unsuccessful should be an encouragement to anyone in ministry. (what an incredibly rare gift to have had these two as your pastors and yet the church didn’t grow explosively so it was shuttered!). Overall, the book models life as an apprentice together with God as the hope and indeed, the expectation for all of us.

“I’ve had to [learn that] the important thing is not what I accomplish but the person I become.” (Willard)

“The deepest, most fundamental reason for studying the life of another person is so we can learn to live our lives more fully, more truly, more authentically.” (Richard Foster, introduction)

“Eternal living, [Dallas] would later discover in the words of Jesus, means entering into a transforming friendship with the Trinity, a community of love that will never go away.”

“Grace needs to have both a past tense (forgiveness by God) and a present tense (ongoing interaction with God). Simply managing sins, Dallas learned, does not lead to the abundant life Jesus promised.”

“We live at the mercy of our ideas” (Willard)

Pastors “earn…the right to teach by virtue of their living in a knowing relationship with Jesus.”

Thanks for this review. I did not know of Willard’s passing. Also did not know of his academic career. As someone who has taught in the academy and also continue to work on living a life faithful to following God I will be looking forward to the example of Willard. Now one of that “great cloud of witnesses”.

Thanks, Evelyn, for sharing. One of the beautiful things I unearthed in this book was how significant an influence Willard was in the academy (in his case, the philosophy department at USC) without ever being preachy or overly religious. He simply lived out a faith that was winsome and attractive to his students and even to other faculty members. May it be the same with you!
– Grace & Peace,
Brad

Thanks for the thorough review Brad…Willard was (and continues to be) one of my spiritual mentors. This book has be added to my summer reading list.