What's New
Through the conflict, life carries on in Ukraine
A FOCUS on Mission
Must Patience Be So Slow?
Harold Jantz: A Heart for the Mennonite Story
Lorlie Barkman: A Life of Creative Engagement
Last Days, First Days
Women in Ministry: Bertha Dyck
January Moment in Prayer “Holy Spirit—Fill Us!”
The Church as the Patient Body of Christ
Advent: Making Much of Jesus: Christmas Day
Home Arts & Culture Affable alcoholics explore human heart 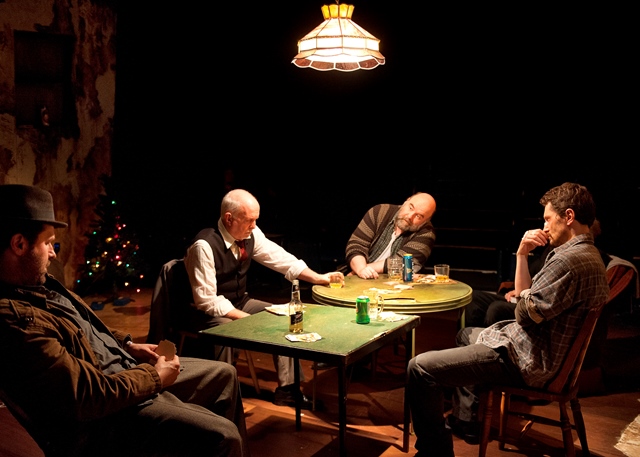 A production by Pacific Theatre

The Seafarer is a dark comedy by Irish playwright, Conor McPherson. On the surface, it is the tale of two brothers and three friends gathered over the holidays for a friendly game of poker. At its depths, it is a brilliant exploration of the human condition and family dynamics within the context of an underemployed blue-collar family in a poor fishing village in Ireland.

From the moment the lights go up on The Seafarer, you are transported to the shabby living quarters of brothers “Sharky” James and Richard Harkin. The intimate stage and seating layout at Pacific Theatre creates a sense of immediacy and heightens the dramatic tension as the play unfolds. You are literally right in the room with the characters and there is no means of escape for anyone.

Though all of the actors’ portrayals are very strong, Reed takes the award for best actor in his portrayal of blind and suffering Richard Harkin. It is a rare treat to see an actor embody a character so completely from head to toe through every moment, line and movement.

The set design by Drew Facey features perfect textures and colours with excellent attention to detail, right down to Richard’s thoroughly worn-out swivel chair. Sydney Cavanagh’s excellent costuming is true to character and enhances the differences between the characters. All of this is beautifully lit by lighting designer Lauchlin Johnston.

Luke Ertman’s soundscape deserves special mention. The offstage sound effects (combined with the dialogue) are at times hilarious and occasionally ominous. The gradually evolving soundscape builds and pulses its way into your consciousness. It’s so good that it’s difficult to describe the exact nature of the impact on your psyche, only that it contributes to the sinister nature of the plot turn and climax of the play.

Worship in a profane Irish cottage: a personal reflection 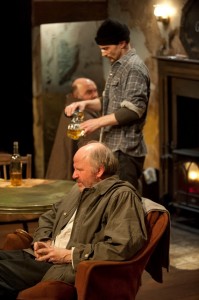 The crisp Vancouver night is a refreshing relief upon leaving a ramshackle Irish cottage filled with alcohol-infused lives portrayed in a close theatre. Phew! That was heavy –yet I’m mystified and grateful.

The Seafarer ventures into the darkness of our human condition through to hope where light almost dawns. From the start, F-bombs slap you in the face. The aged house, more a wasteland of neglect and abuse than a home, creates a stifling atmosphere. The Seafarer presents an opportunity for risky theatre-going.

Yet, if one is with dear friends who dive with grace into the real stuff of life, unwilling to skim the surface; if conversation goes deep and personal, and life stories are shared; then meaning peels away layer by layer and one begins to integrate the truths portrayed.

Is it just me, or does theatrical verisimilitude make questions about the human condition more accessible? Crafty truth-telling occurs through unrefined yet likeable characters like Sharky, Richard and their pals with their idiosyncrasies, humorous though pathetic behaviours, bickering and compulsive drinking. We enjoy them from a cultural distance until the plot reveals a universally known battle, a shared foe and eternal truths.

The Seafarer gradually portrays truths about the impossibility of repaying our debts or saving ourselves. The mirror onstage reflects a picture of me. The deceitfulness, denial and justification of addiction and the resulting blindness and injury is symbolized onstage in the story unfolds.

Richard’s pursuit of the bottle despite its betrayal of his decrepit body represents self-deception while trying to escape pain and hobbling further into bondage and ruin. Tim Dixon’s apt portrayal of Ivan speaks comically about the insanity of addiction. Andrew McNee’s characterization of Nicky is a well-crafted and heartily delivered picture of self aggrandizement, conning and manipulation.

Yet it is the character Sharky who is most at a crossroads in life. We do not know what precipitated his soul searching, only that he returns home beaten, bruised and vulnerable but finds no refuge.

The twist occurs when a well-dressed and extremely controlled visitor (John Innes) joins the motley crew’s Christmas Eve gathering to seek repayment. The ensuing card game is a power-play for Sharky’s soul. 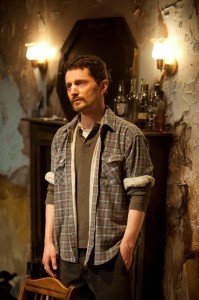 Director Anthony F. Ingram’s creative and spiritual energy is evident in the staging of this story of redemption and in the nuanced acting performances and fully developed themes from Conor McPherson’s script. The actors’ movements on and offstage draw the audience into occupying time and space with the characters.

The soundscape is sublime – a multi-sensory experience that contributes mood, suspense, emotion and an ominous feeling of oppression.

At times, Ingram juxtaposes the stark realism with brief supernatural moments when the spiritual world is briefly seen. This is done to great effect by employing elements of darkness and light, such as a lit-up picture of Christ pulsing and flickering in the darkness.

Like these characters who together flounder and fail and eventually take baby-steps into the light, I also journeyed into the light with my companions as I watched The Seafarer. Plumbing the depths of this production with these particular friends took the theatre experience to a whole new level because we are going through Freedom Session together at Gracepoint Church.

A striking thought is emerging: for me, attending plays at Pacific Theatre has become an act of worship. Instead of choosing what sounds appealing, I must expose myself to each artistic offering throughout the season because this has proven to be a meeting place with the Spirit who is at work in the art and in me.

Being in the audience means taking part in the creative process with the theatre artists and the whole community; therefore, theatre is a shared experience of corporate worship. The body of Christ needs to worship and journey together.

Thank you, Anthony F. Ingram and Pacific Theatre for the worshipful offering of The Seafarer. It makes an impact when one sits in the tension of messy broken lives at their turning point, integrating the truth-telling in this hard-hitting work of art at a personal level, and sharing the experience of the journey with those aboard.

Something bigger than addiction