What's New
How sweet the sound
One MCC Thrift Store Began With a Few...
A Hunger for Conversation
Getting the mental and emotional rest you need...
The Patience of God
2023 Spirit of MDS Fund accepting grant applications
October 2022 update from the CCMBC Executive Board
Arnold Community Church hosts block party to thank...
When Spring returns
An autumn reset
Home Arts & Culture Annual Fall Theatre at Bethany College: The Voyage of the Dawn Treader

Annual Fall Theatre at Bethany College: The Voyage of the Dawn Treader 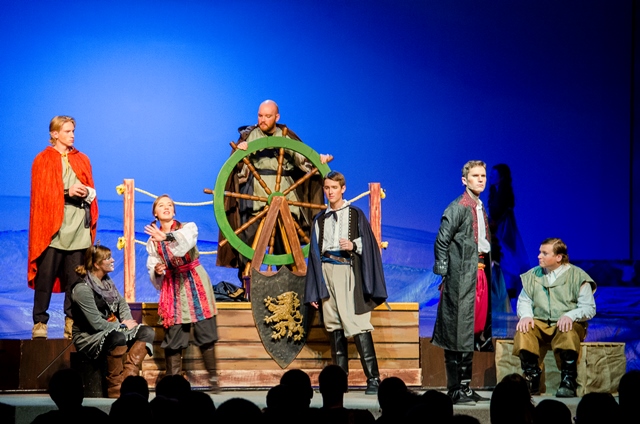 One could begin by describing the water, or one could attempt to tell about the rich, deep and changing colours on the set. One could talk about the amazing effort and concentration that it took to bring this drama together after a difficult month for the students and the Bethany College family.

Or one could just jump right into the story; be pushed into it; let the salt water hit you in the face as you fall into a storm. On stage, the ship is rolled onto the ocean, characters stand in silhouette as the sounds and lights draw us into the storm, and then recede to make way for the rescue of Edmond, Lucy and Eustace.

Suddenly, we are in Narnia. 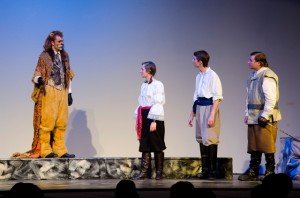 Susan J. Schmidt Goerz, Ministry Arts Director, and cast brought us to Narnia last year through the wardrobe in The Lion, the Witch, and the Wardrobe. This year guests were brought back to Narnia in another C.S. Lewis story, The Voyage of the Dawn Treader, which ran Oct. 30 to Nov. 1. Nearly 1,300 guests visited Bethany College over five shows.

Edmond (Matt Janzen), Lucy (Judith Schulz) and Aslan (George Hembery) were familiar to the returning members of the audience as this was their second year in these characters. Yet, their characters had grown; they felt at home in Narnia and drew their audience in convincingly.

Dynel Weber as Reepicheep demonstrated character and depth as the valiant mouse whose desire was always to keep the ship headed east – the utter, utter east – to Aslan’s country.

The ship’s crew of Drinian and Rynelf (Josh Kehler and Mitchell Klassen) managed the vessel and the voyage with humour that was new to the readers of the books, but completely at home in this script.

King Caspian’s character developed the most as the performances progressed. Always kingly in authority and with strength of presence on the ship and on the islands, Bryan Vellacott’s portrayal became more human – more nuanced with each presentation. His struggle to allow Reepicheep to go on to Aslan’s land without him became increasingly compelling. 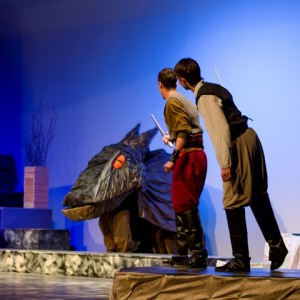 And the character we first meet in the Dawn Treader, the very disagreeable cousin-turned-dragon and then transformed Eustace Clarence Scrubb was played by Derek Giesbrecht, who was entirely unpleasant – dragonishly endearing – and convincingly transformed.

As with all of C.S. Lewis’ fantasy books from his Chronicles of Narnia series, the storms on the ship, the islands with slave trade, the allure of gold and treasure, and the moments of danger and rescue were a window into our own world of storm and rescue, where many of Aslan’s words ring true for us. Notably, to Aslan’s promise that he will return soon. “But what is soon?” Lucy asks. Aslan replies, “I call all times soon.”