What's New
Through the conflict, life carries on in Ukraine
A FOCUS on Mission
Must Patience Be So Slow?
Harold Jantz: A Heart for the Mennonite Story
Lorlie Barkman: A Life of Creative Engagement
Last Days, First Days
Women in Ministry: Bertha Dyck
January Moment in Prayer “Holy Spirit—Fill Us!”
The Church as the Patient Body of Christ
Advent: Making Much of Jesus: Christmas Day
Home PeopleAnniversaries Theatre that matters

Pacific Theatre celebrates 30 years of creativity, artistry, and the grace of God 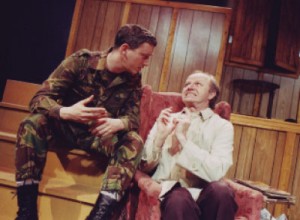 In summer 1984, seminarian-turned-theatre-graduate Ron Reed and three friends took a leap of faith and started their own theatre company. Two were supported by their wives, while the others lived for free in friends’ homes, together pursuing a dream that seemed impossible amid Vancouver’s secular theatre community. Yet today, three decades later, Reed is executive director of Pacific Theatre (PT), a cherished part of Vancouver’s theatre scene, and “a place where [Christians] can bring their craft and calling together.”

“At that time, the only theatre created by Christians toured to churches or was sort of evangelistic in nature,” says Reed, “and that was not our intention. We really wanted to do theatre as an art form, to do the highest quality of theatre that we could do.” 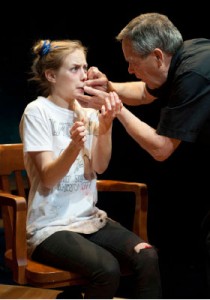 Now preparing for its 30th season, Pacific Theatre employs five permanent staff and three apprentices on annual contract for nine or ten productions during its September to June season. PT auditions and hires professional actors, designers, and technicians for each show in their alley-style 128-seat theatre in the basement of Holy Trinity Anglican Church, Vancouver.

Part of Reed’s motivation for forming Pacific Theatre was to produce two pieces he knew no other theatre in Vancouver would touch: Cotton Patch Gospel and Damien (a one-man show about a priest who worked among lepers). “The actual play I would be in was more important to me than the role,” says Reed. “It was important for me to be part of a theatre company where we chose the plays.”

Pacific Theatre is, according to Reed, essentially “non-propagandist.” It asks questions and considers possible answers without presenting one as the obvious choice. “I studied theology with J.I. Packer when I was at Regent College, and he defined propaganda in this way: answering a question before it’s been asked,” says Reed. “Theatre is really best at exploring human experience, exploring what it’s like to be a human being, rather than preaching a message.”

This mandate has stayed with Pacific Theatre over the course of its three decades, although Reed is the only member of the original four still with the company. Some plays, such as Reed’s own Refuge of Lies, deal with social and political issues on a national level (i.e., the Jacob Luitjens war crimes case in 1992), while others, such as 2012’s Leave of Absence provoke discussion about community, religion, and sexuality. 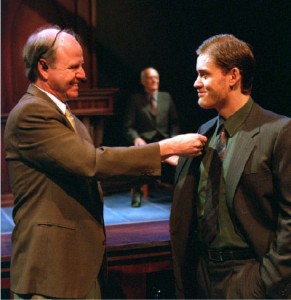 Karyn Guenther, a current Pacific Theatre intern and member of Bakerview MB, Abbotsford, B.C., played the lead in last year’s production of Leave of Absence. She connected with PT while taking classes from Reed at Trinity Western University, and wanted to be a part of the production from the moment she read the script. “Pacific Theatre kind of chose me,” she says.

Guenther intended to move to Toronto after completing her degree at TWU, but the opportunity at PT changed her plans. “Pacific Theatre is really great because they put [spiritual issues] on their stage,” Guenther says, explaining that the atmosphere at the Christian university and at PT have been instrumental to her faith. “I really felt so safe there – and so safe here –to question while creating, and not feel like my whole world was going to fall apart.”

PT is “theatre that matters,” says local MB church planter Nelson Boschman, a fan of Pacific Theatre since he discovered it with his wife 15 years ago. For the last six years, he’s served as musical director for Pacific Theatre’s Christmas Presence holiday special. The semi-rehearsed event combines a house band of local musicians with readings courtesy of Ron Reed.

Christmas Presence (what Ron Reed calls the ‘unslickest Christmas show in town’) “models in some ways a lot of what I think the church should be about,” says Boschman. “We’re all bringing what we have to the table, something that we offer together to the world. It’s an environment of grace.

“As I look through the pages of Scripture and I see the amount of metaphor and image and the way Jesus taught asking questions, not always answering questions, answering them with more questions (laughs)… I just see so much theological richness in what [Pacific Theatre is] doing,” says Boschman. “They’re raising questions within our community and causing people to think about things.”

Reed sees those questions reverberate within the cast also as they work to “understand the soul and life and decisions” of the characters they play. “There have been plenty of people who have worked at Pacific Theatre who don’t have an expressed faith commitment who very much go on a spiritual journey over the course of working on a show with us,” he says.

The times haven’t always been successful for PT. For nearly all of the company’s first decade of existence, the theatre received little recognition from Vancouver’s artistic community. Many patrons and artists shied away from the perceived “Christian” label, and Reed struggled simply to get the company’s productions reviewed.

Now Pacific Theatre is a prestigious name with more than 70 Jessie Richardson Award nominations (annual Vancouver theatre awards), and a thriving community of actors and patrons. This June, PT took the “outstanding performance by an actress in a lead role” award for Erla Faye Forsyth’s acting in How to Write a New Book for the Bible.

Reed looks back over the 30-year history of the company with pride – and gratitude. “I didn’t mean to run a theatre company with my life,” he says. “I meant to be an actor and then a playwright, and Pacific Theatre seemed like a good way to get that done, but actually I came to see maybe this company is my legacy.”

Just saw COMMUNION with two friends. We were spellbound. A magnificent, nuanced, heart & soul engaging performance. Many thanks! Anne-Marie