What's New
Through the conflict, life carries on in Ukraine
A FOCUS on Mission
Must Patience Be So Slow?
Harold Jantz: A Heart for the Mennonite Story
Lorlie Barkman: A Life of Creative Engagement
Last Days, First Days
Women in Ministry: Bertha Dyck
January Moment in Prayer “Holy Spirit—Fill Us!”
The Church as the Patient Body of Christ
Advent: Making Much of Jesus: Christmas Day
Home Arts & Culture Wittenberg

Conversation between philosophy and theology engaging and amusing 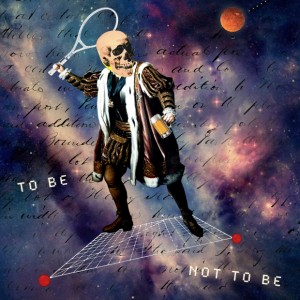 Put together the man who sold his soul to the devil, the orphaned prince who strolls through graveyards talking to ghosts and contemplating suicide and murder, and the father of the Protestant Reformation – on the very anniversary of his posting “95 Theses” – and you have a perfect play for All Hallow’s Eve. Pacific Theatre appropriately opened its second show of the 2012 season, Wittenberg by David Davalos, on All Souls’ Day.

Rather than a foray into the macabre, however, the show is a conversation between philosophy and theology on such topics as truth, belief, faith, free will, power, and forgiveness. Luther (Marcus Youssef) and Faustus (Anthony F. Ingram) appear as contemporary colleagues, both professors at Wittenberg University, each vying for their favourite student Hamlet (Mack Gordon) to follow in his footsteps.

While Hamlet wrestles with which major to declare, the audience witnesses the contending yet concerning relationship between Faustus and Luther as they debate, counsel, and exhort each other: Faustus attacking Luther’s cowardice in confronting the church on its sale of indulgences, and Luther critiquing Faustus’s abandon to living a life of indulgence, in particular, lusting for Helen of Troy. (Shauna Johannesen beautifully embodies all the female characters of Wittenberg as “The Eternal Feminine”).

Wittenberg’s helping of meaty subjects is served up in the language of early modern English, yet the play is not heavy; it’s as much a comedy as a drama.

Director Stephen Drover’s setting on a 20th-century university campus provides a familiar context for audiences to easily engage with the characters. Additionally, Pacific Theatre’s alley stage doesn’t allow audience members to remain passive observers, but transforms them into members of the lecture hall when the actors look out upon their “students.”

Pacific Theatre presents Wittenberg as a staged reading – a new experience for this seasoned playgoer. Rehearsals for the show began only two days before opening night, so the audience for this production is privy to a rarely seen step in the creative process of mounting a play. The set and props are basic, primarily functional, allowing the actors to flexibility to explore character interaction and staging. Lighting, sound, and costumes are only subtle suggestions of context and character.

Actors perform with script in hand, but in no way does the lack of production take away from the enjoyment of the experience – testifying to performers’ talent and skill.

Wittenberg is Pacific Theatre’s third presentation of a staged reading, having previously brought 12 Angry Men and The Last Days of Judas Iscariot to its stage in this format. A staged reading has the advantages of testing an audience’s response to a production (before committing time and finances to a full production), and facilitating collaboration between artists whose schedules might not otherwise allow them to work together.

At this point, however, there are no plans to fully produce Wittenberg at Pacific Theatre, so this is your opportunity to take in this engaging theatre experience!