What's New
A FOCUS on Mission
Must Patience Be So Slow?
Harold Jantz: A Heart for the Mennonite Story
Lorlie Barkman: A Life of Creative Engagement
Last Days, First Days
Women in Ministry: Bertha Dyck
January Moment in Prayer “Holy Spirit—Fill Us!”
The Church as the Patient Body of Christ
Advent: Making Much of Jesus: Christmas Day
Advent: Making Much of Jesus: Fourth Advent
Home News Saskatchewan convention 2015 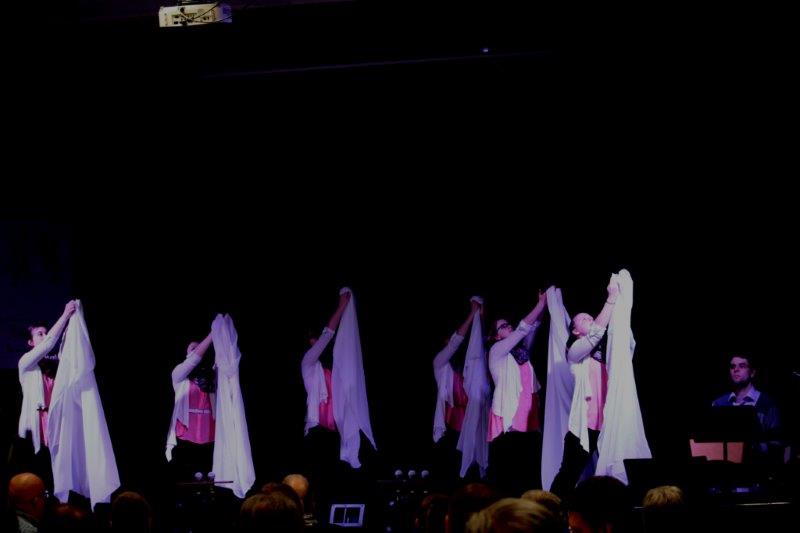 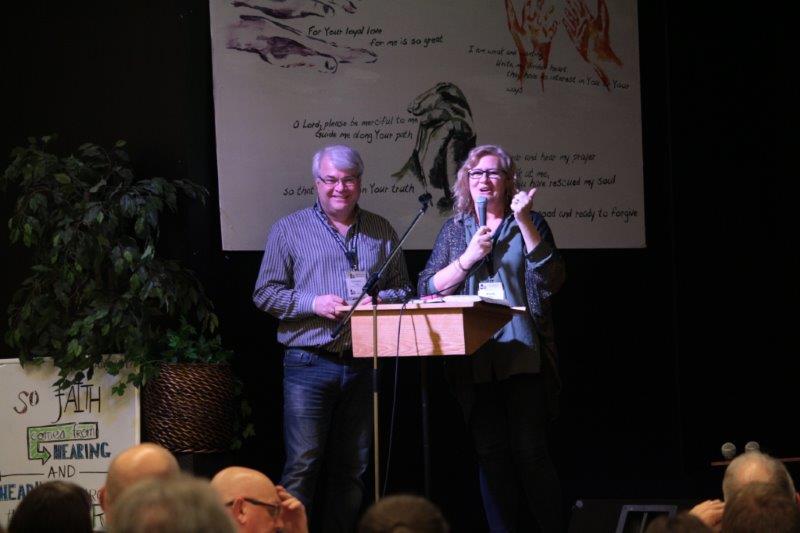 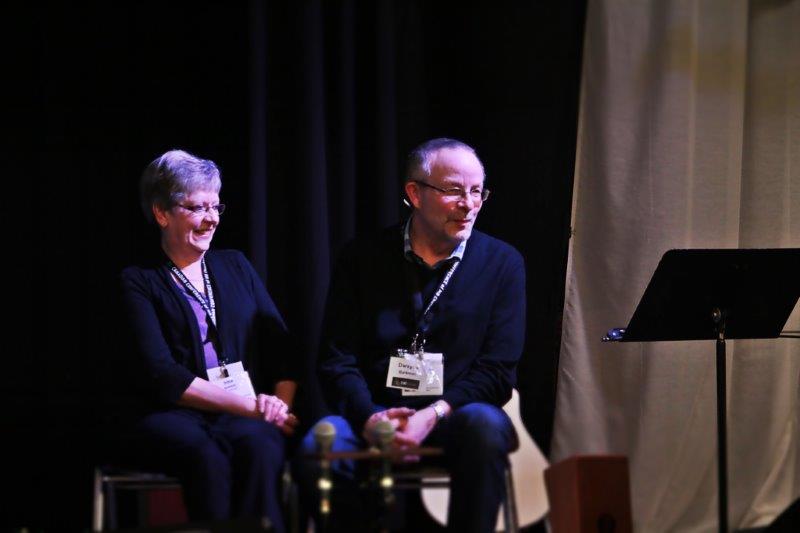 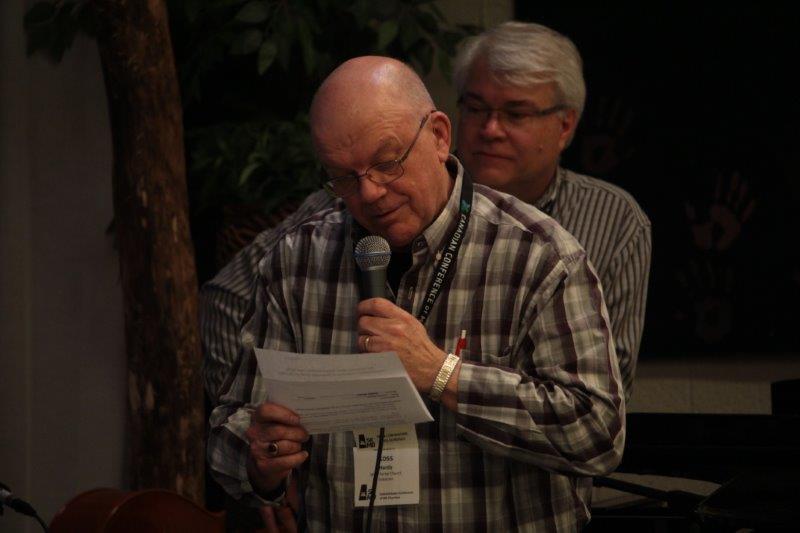 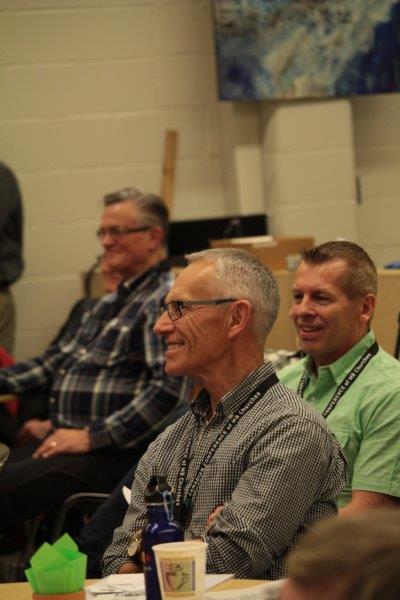 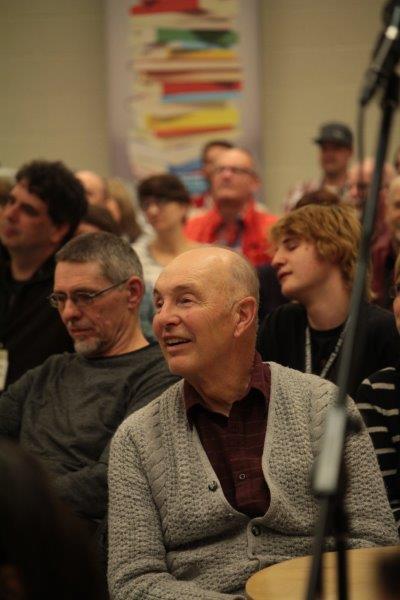 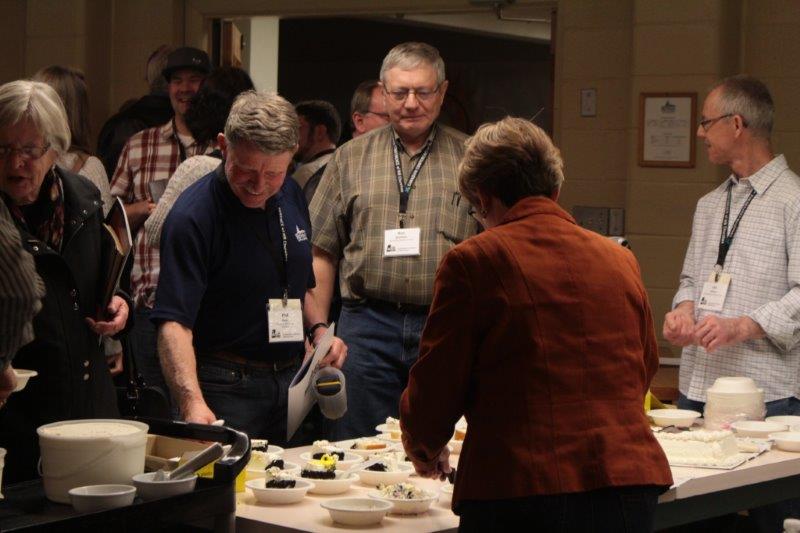 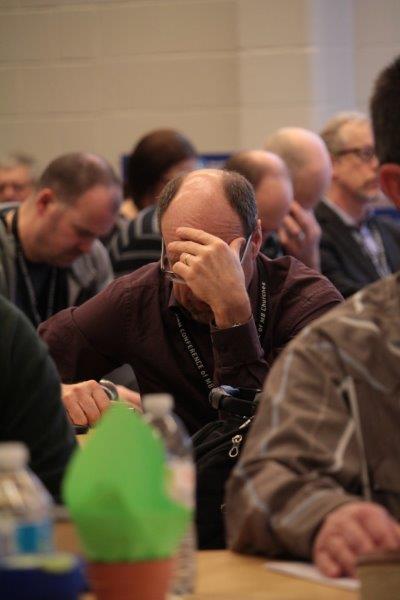 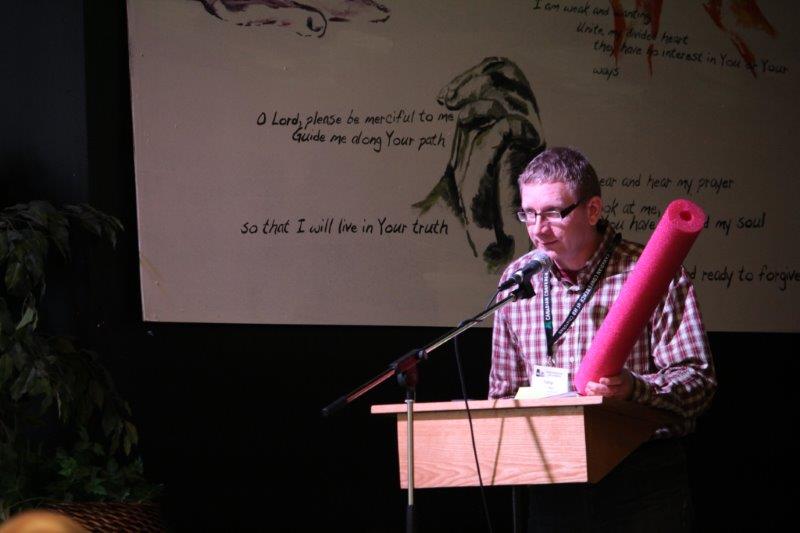 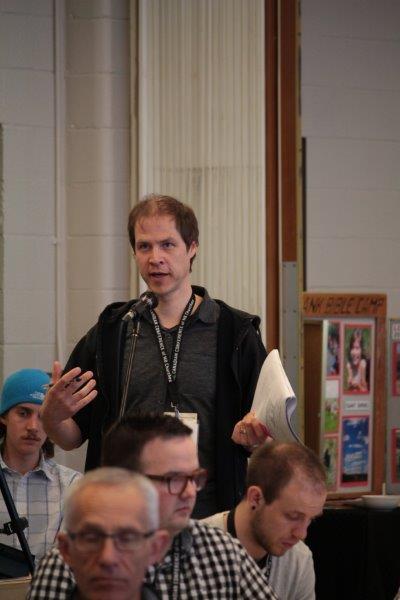 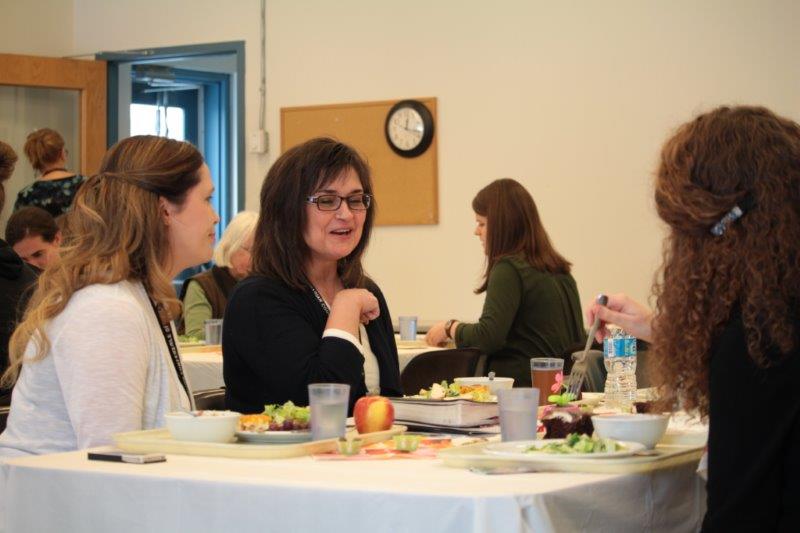 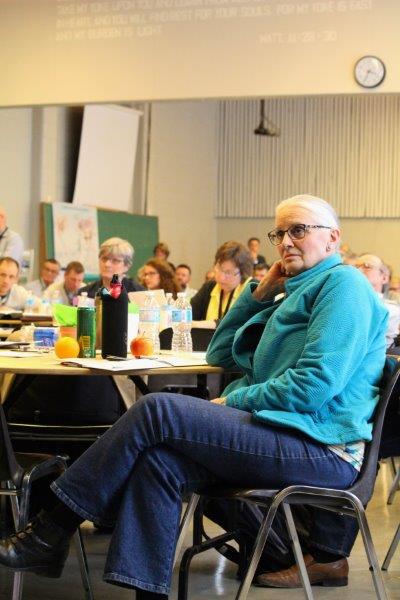 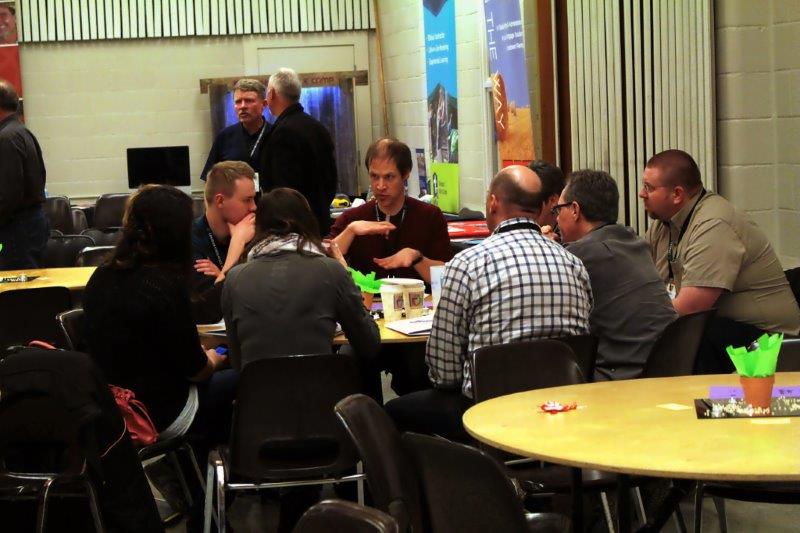 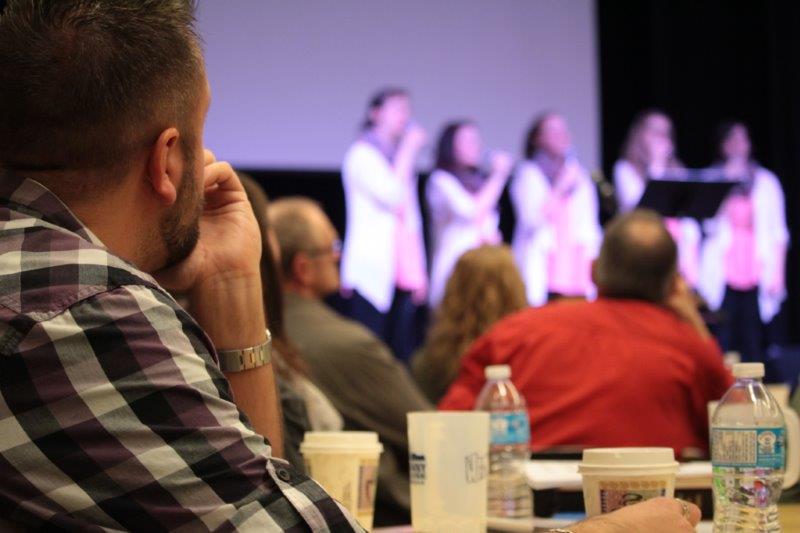 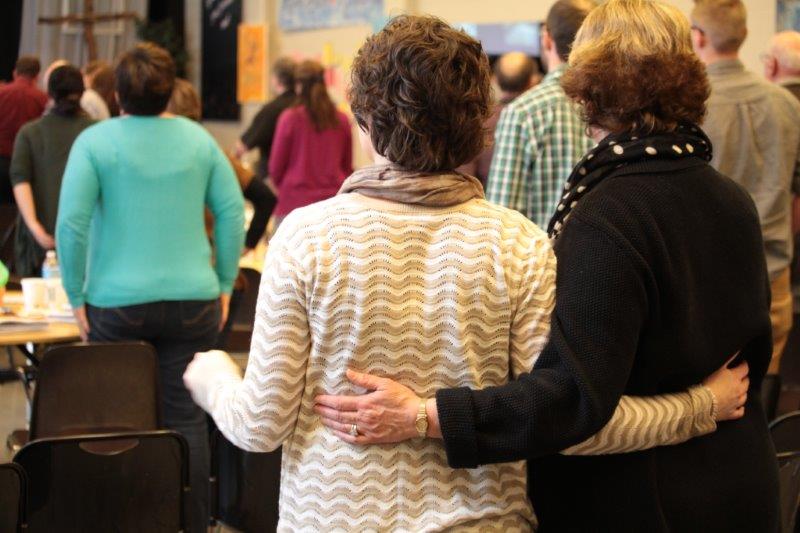 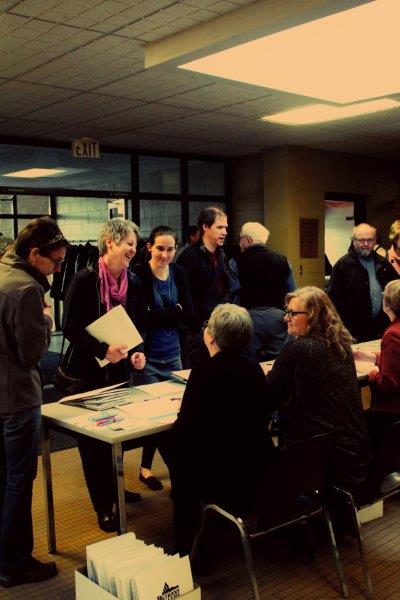 The theme of the 69th annual convention of the Saskatchewan Conference of MB Churches, Mar. 13–14, 2015, was “Unless a seed…,” drawn from John 12:24. The convention proceedings evoked the multiplication hope expressed as the verse continues: “…falls to the ground and dies it remains a single seed.” Presentations inspired convention delegates – who spanned decades – with stories of the fruits of seeds that had been planted many years before and seeds that are just beginning to sprout. 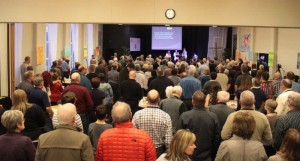 Friday night was a celebration and time of remembrance for the work of Bethany College and its 88 years of ministry. There was standing room only in the chapel.

Bethany began with one man who had a passion to teach the Word of God to young people. George Harms taught for three months in the nursery of Hepburn MB Church. Then a school board formed in 1927 and D.P. Esau taught seven students in the basement of that same church.

Student numbers grew to 21 by the end of the first year. Harms came with one seed: 88 years later some 8,000 students have passed through the doors of the college.

Howie Wall, college president, presented the current status of the college. He commended the community bond that has developed as staff, faculty and students have faced the decision to close the school, changes to staffing and the October vehicle accident from which student Addie Francis is still recovering.

Bethany students will finish their fourth-year internships under the direction of Darlene Klassen and Columbia Bible College, Abbotsford, B.C. “As staff, we desire for the students to end well. The students’ desire is that we, as staff, end well,” said Wall. “The spirit of community is strong.” 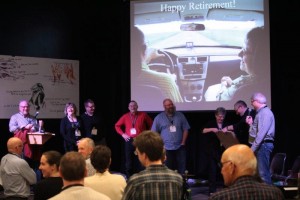 The Friday evening celebration also honoured Dwayne and Irma Barkman for their years of service to the Saskatchewan conference on both provincial and national levels. Dwayne completes his service as C2C Network regional director in 2015, having served the province as staff church planting mobilizer since 2009.

The Barkmans have produced much fruit as church planters and pastors; their absence on the active ministry front will be keenly felt. The conference wished them God’s blessing as they enter retirement.

Una Froese of the Gathering at Broadway community, a congregation of Forest Grove Community Church, Saskatoon, spoke of reaching out to people who have had previous church experience and are now coming back to Christian community through the three-year-old church plant, healing hurts and bringing their unsaved friends. “It is nothing like we expected.” Una said. 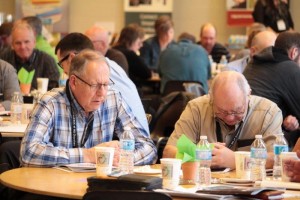 The faith and life team (formerly the board of faith and life) shared about a new arm of their ministry: the prayer initiative team. Their intention is to create a network of at least one intercessor from each church.

Invitations went out to all pastors, encouraging them to ‘tap shoulders’ of those with a burden for intercession to join in. The prayer initiative team met on Thursday prior to the convention with approximately 25 people in attendance. “A great start!” said Lloanne Pinel, team chair team.

Froese also updated delegates on the formation of a developmental leadership team to focus on discipleship and training leaders through all generations.

One outgrowth of the developmental leadership team is Saskatchewan MB Women in Ministry, spearheaded by Wanda Froese. This is an effort to give women in ministry a place of camaraderie and to provide a forum to voice and address issues pertinent to women in ministry. 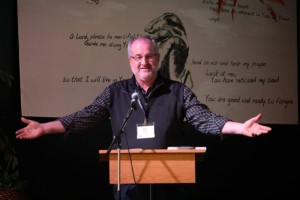 Ron Toews encouraged delegates to press the “Coach Me” or “Coach Us” button on L2Lnet.org. The L2L network is available to individuals and congregations to help build effective leadership. “Only touch it if you’re serious!” said Toews.

MB Mission’s short-term local experience SOAR Saskatchewan completed its third year with 77 participants and team leaders, an increase from 2014. But, “there are still Saskatchewan MB churches that aren’t really aware of the opportunity for their youth,” said Letkeman. He was thrilled with the quality of young people coming to SOAR and encouraged by the ministries partnering with MB Mission to continue to build future opportunities. 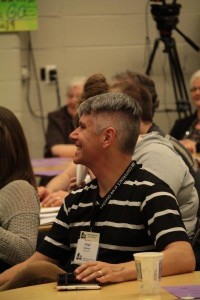 The regional C2C Network report highlighted two new church plants being seeded through the Grace Fellowship and The Compass Church congregations in Warman and Regina respectively. Convention delegates gathered around Mark Janzen and Clay Bittner (Grace Fellowship, Saskatoon) and Luke Etelamaki (Compass, Regina) to pray and commission them ahead of their upcoming launches.

Both Redberry and West Bank Bible camps are looking forward to a full complement of staff and campers heading their way this summer. David Seeley and Jerry Dennill, respective directors of the camps shared their vision and heart for ongoing camping ministry. “Every summer, about 150 kids give their hearts to Jesus; that’s a whole congregation!” said Dennill.

The 2015 budget discussion – which ran past the convention closing time – was “a healthy struggle,” said Kelly Wiebe, pastor at West Portal, Saskatoon. The executive board continues to explore changing the church contribution structure in 2016 from a per-member norm to a percentage of a congregation’s annual budget.

After much discussion, delegates approved the recommendation to raise the norm from $75 to $79. 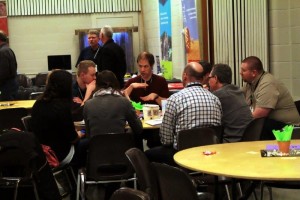 Pat Dergousoff, director of ministry support, presented a budget of $385,200 with a deficit against expected income. Moderator Todd Hardy said the plan is to offset deficit budgets by drawing down the $700,000 conference reserves (from past surpluses and sales of church properties), projecting a balanced budget in 2019 with $200,00 left in reserve.

“We are not a bank and these monies are meant for ministry,” said Dergousoff. The conference will work closely with the constituency to achieve financial sustainability.

Delegates questioned whether the lack of giving was because churches don’t care, or because of a perceived lack of vision and clear communication from the provincial conference.

Before closing the convention with prayer over the new church plants, Froese simply stated the fresh vision of the Saskatchewan conference that he has been sharing with Saskatchewan churches:

“We see a church passionately in love with God, led by his Spirit, on mission, bringing Jesus’ gospel of redemption and restoration to the four corners of Saskatchewan.”

PHOTOs by Alyx Pekinpaugh, a student at Bethany College.

Not your mother’s women’s ministry