What's New
A FOCUS on Mission
Must Patience Be So Slow?
Harold Jantz: A Heart for the Mennonite Story
Lorlie Barkman: A Life of Creative Engagement
Last Days, First Days
Women in Ministry: Bertha Dyck
January Moment in Prayer “Holy Spirit—Fill Us!”
The Church as the Patient Body of Christ
Advent: Making Much of Jesus: Christmas Day
Advent: Making Much of Jesus: Fourth Advent
Home News Linked 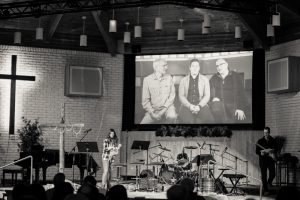 Young and old are connected at Steinbach (Man.) MB Church which hosted the annual Assembly of Mennonite Brethren Church of Manitoba on the theme Linked Mar. 1–2, 2019. The 92-year-old church cherishes one member who has seen all 92 while the worship band includes a 10-year-old drummer. The congregation called veteran church planter and pastor Ray Klassen out of retirement to mentor under-30 outreach pastor Kelby Friesen as he finds opportunity to walk alongside people who are searching for God. 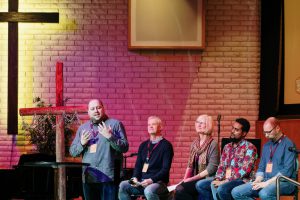 “…by being the body of Christ together in adversity and good times,” said Johnny Dodsworth, discipleship and life groups pastor, Eastview Community Church, Winnipeg (verse 1).

“…by the joy that comes from the hard work of unity building in the church,” said Mary Anne Isaak, pastor, River East Church, Winnipeg (verse 2).

“…by helping other before ourselves and finding our own successes bound up in putting others first,” said Meron Tsegay, youth pastor, Philadelphia Eritrean Church (verse 3).

“…by following Jesus’ example of giving up our own comforts so the community can thrive,” said John Neufeld, lead pastor, The Meeting Place, Winnipeg (verse 4).

The bond of the link was tested and proved when a delegate spoke up asking for the ticking clock counting off the seconds of each speaker’s presentation. “It’s distracting; we just want to hear the Word,” he said.

Dyck later spoke about how this honest engagement with each other as members of the church together builds our bond to each other and to God in humility and friendship. 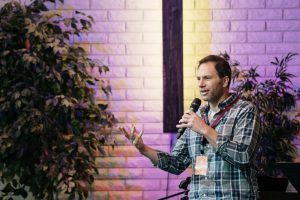 The sessions were linked with church stories: Terry Dueck told how Winkler MB Church became self critical about sending mission trips to Mexico when there were needs in their own community. A team did surveys and spoke to community stakeholders about needs, which led to creating a community centre.

“You fear regret more than you fear failure,” Dueck said, so the church went ahead. Up to 220 people flow through on a weekday night for a community meal. Some 76 volunteers serve each month. “The idea was to gift it back to the community, not to hold tightly as a church.” 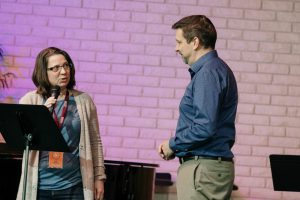 In the business session, moderator Ruth Schellenberg noted the transitions that characterized the year. Executive director Elton DaSilva, constituency relations person Carson Samson, and administrative assistant left for other opportunities while leadership development coordinator Janelle Braun went on maternity leave and Dyck announced he would return to the pulpit in Morden, Man.

Schellenberg introduced Cam Priebe, who joins the team in June as executive director, and pastor John Neufeld prayed a blessing over him. “[As Outtatown director], I’ve learned alongside people living out being the church in their context in Guatemala, South Africa and across Canada,” Priebe said. “I’m reminded of belonging, of being loved by God.” 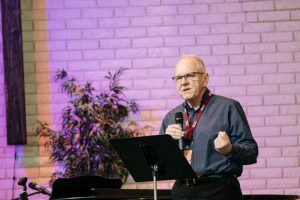 Treasurer Harold Froese contextualized the budget in terms of ministry: “10 years ago there were around 39 churches; now there are 54…. That represents a lot of effort and some spending.”

MBCM has two church plants operating under its charitable number and other pass through expenses making the budget numbers look large. The budget passed for 2019 is $565,800. Lower personnel costs due to staff turnover allow for a smaller number.

The missionary is “in”