What's New
How sweet the sound
One MCC Thrift Store Began With a Few...
A Hunger for Conversation
Getting the mental and emotional rest you need...
The Patience of God
2023 Spirit of MDS Fund accepting grant applications
October 2022 update from the CCMBC Executive Board
Arnold Community Church hosts block party to thank...
When Spring returns
An autumn reset
Home News Apprentice pastor: a social worker in church 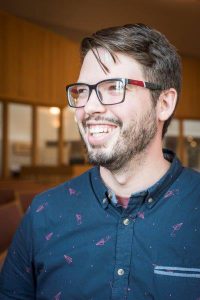 It’s a familiar refrain: you can’t get a job without experience but you can’t get experience without a job. The challenges are compounded when professional fields, like the pastorate, expect advanced degrees. Mennonite Brethren Church of Manitoba and MB Seminary are collaborating to help with a program called Elevation. MB Mission Central Canada’s TREK internship is an entry step.

Elevation is an apprenticeship, intended to span four years, during which the participant serves half-time in a local MBCM congregation, while taking courses for an MA in Christian ministry at MB Seminary’s Canadian Mennonite University campus in Winnipeg.

“We want to provide opportunities for training in the context of local ministry,” says Elton DaSilva, MBCM executive director.

Alleviating the financial pressures that can hold people back from the risk of career change and retraining, the participant’s half-time salary is provided equally by MBCM, the church and personal fundraising. MBCM also funds two courses per year (6 credit hours).

“Seminary students who have experience in church ministry are more equipped to assess the significance of what they’re studying, and to ask sharper questions about what they’re hearing and reading,” says Andrew Dyck, MB Seminary assistant professor of ministry studies. “These students are also more equipped to make meaningful connections between their congregational experience and seminary studies.”

Elevation’s first participant Jonathan Muehling had no intention of becoming a pastor. The psychology graduate was working with at-risk youth when “I started to have some mental health issues and was battling with anxiety. I needed a change.”

Just then, MB Mission Central Canada launched their TREK internship, so he signed up, expecting to find a ministry placement in his field. Instead, after conversations with the influencers in his life and his pastor, Russ Toews of Westwood Community Church, Winnipeg, he served his internship at the church. 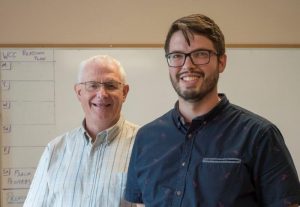 “Jonathan and Melanie have a servant attitude,” says Toews. “There’s always a willingness to get involved, jump in and get dirty.” After TREK, “I was sad to see him leave,” says Toews. “I wanted to continue that on as long as it could,” so Elevation became the next step.

“Internship is learning about being a pastor,” says Muehling. “Apprenticeship is learning how to be a pastor.” It’s no longer asking if it’s “a good fit,” but doing the work.

“As an apprentice, I have a lot more freedom to make mistakes,” says Muehling. “People look at lead pastors like you’re perfect. People recognize I’m in a learning process.”

The Elevation program is also in development. Dyck is still clarifying guidelines. “Presently, for instance, I’ve been designing questions that can be asked of apprentices in order to help their formation as evangelistically-oriented pastors,” he says.

Peace on an unexpected path

Muehling has been surprised by his enjoyment of sermon preparation and delivery. “As I open the Bible, it comes alive and God meets with me in that study period,” Muehling says. “I don’t feel like I’m very gifted with public speaking, yet God always shows up and gives me the words to say.”

He still has a desire to see healing among at-risk youth, “but I never had a peace about…the position I was in.

“I feel motivated to see people develop a deeper relationship with Jesus Christ,” says Muehling. “It breaks my heart that Christ is so misrepresented in society.”

It has been a circuitous journey, but Muehling doesn’t regret the steps along the way. “A BA in psychology is a great background to working in the church.” Training in suicide prevention and crisis intervention are useful skills: “Mental health issues run rampant in society and often churches are blind to them.”

“Becoming a pastor wasn’t my choice,” he says. But “as soon as I said, yes, I will learn what it means to be a pastor, there was overwhelming peace.”

What an amazing step toward pastor-ship growth!
Would this program be age specific?
Having redirected my life to a Pastoral Counselling role having worked as a Social Worker with Union Gospel Mission in Vancouver BC, and other recovery centers across Canada.
My inquiry is one of direction , would you advise me pursue a Masters in Religious Counselling or involve myself in a program such as yours.
Respectfully,
Allex Ramsey