What's New
Tibetans in the Neighbourhood
MCC BC and MDS Flood Response and Partnership
Resilient Leadership: Praying against burnout
Boldly advancing the gospel from our knees
MCC sends food and relief to Cubans in...
Robert Dagenais, pastor of the Sainte-Thérèse church, is...
More donated hay needed to help farmers in...
“God’s time was perfect”
Hope and pray every day
Resilient Leadership: The gift of self care
Home News “Multiplying for mission: developing leaders for tomorrow” 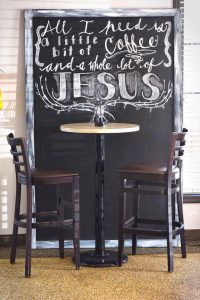 “Welcome to SunWest Church’s home,” said lead pastor and ABMB co-moderator Matt Dyck at the outset of the annual convention of the Alberta Conference of Mennonite Brethren Churches, Apr. 12–13, 2019.

Once known as a Calgary church plant, now the nearly 25-year-old SunWest was convention host in their new home. After years of sharing facilities with others, SunWest purchased the former Knexions Church building June 2018. The convention they hosted focused on emerging leaders and new church plants. 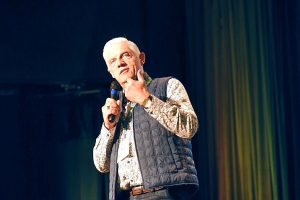 Relationships of love and integrity

Loewen said his wishes for continued development include more discipleship driven by relationship rather than evnets, a willingness to invest in emerging leaders, a multiplication mindset, discernment based on possibility rather than “what we’ve always done,” and intercultural rather than monocultural worshipping communities.

Based on discernment from a board day of prayer and vision casting, convention focused on investing in the next generation of emerging leaders. At the conclusion of each session, a board member led participants in prayer around tables on the focus of the hour’s presentation. 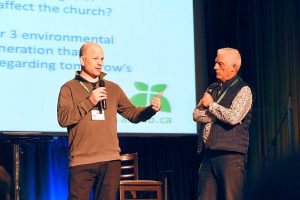 “We used to emphasize the possibility aspect [of adulthood], but over 20 years, anxiety has crept in as young adults struggle to know what to do with overwhelming possibilities,” said Dueck. In some 10 minutes of stage time Friday, he summarized his afternoon’s presentation.

With this dreaded question of “what are you going to do with your life” looming over them “like a guillotine, young adults are hungry for adults who will offer them guidance in narrowing down the choices, said Dueck. The coming of age process involves a self differentiation that privileges the uniqueness of self, Dueck said. Talking about spiritual gifts is one way to transpose that into a Christian category.

Loewen envisions developing a “front-desk” to connect established leaders with emerging leaders to relationally guide them to training and educational opportunities. 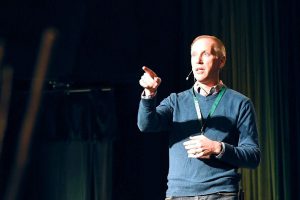 As leaders, does our life draw people closer to God? “That is what is needed above all else,” said Mark Wessner.

Looking at the example set by Moses and Joshua, the MB Seminary president taught on the intersection of emerging leader and established leader. He walked delegates through a Bible study on Exodus 33.

“There never was a prophet like Moses,” says Deuteronomy 34:10. He not only knew God but was known by God, Wessner said.

“How do we linger with God,” Wessner asked,” so our leadership will be characterized by that kind of intimacy with God. Who do we spend our time with and how do we view our sense of call?” 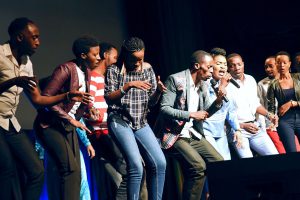 ABMB’s investment in New Canadian churches was evidenced at convention. A delegation from Bethel Eritrean Evangelical Church, Edmonton, attended convention. The mainly Congolese choir from Goshen Church, which has entered the pathway to explore affiliation with ABMB, led worship in song with energetic dancing.

Rod Lorca, pastor of Esperanza, an emerging Spanish church meeting at Crestwood MB in Medicine Hat, was introduced. “God connected us to the right people at the right time. We feel very blessed,” said Lorca.

In addition to administrative help that ABMB offers through Ruthie Kopp, ABMB added Sam Ramirez (SunWest) and Rob Ens (Dalhousie) to the team as mentors for New Canadian and intercultural churches. 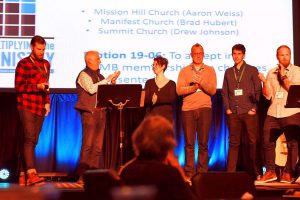 Mission Hill: a three-year-old church that meets in a community centre in the Riverbend area of Calgary, “called to go where there is no church.”

“Our story is like the widow with the jar of oil,” says pastor Aaron Weiss.

Provided with rental space in a community centre that a local family was praying would become a church it even consults the congregation on major decisions, Mission Hill is stepping out in faith, including hiring a new staff member.

Manifest: “God has called us, no matter how hard it is.” Shauna Huebert remembers persisting through a role play at the church plant assessment centre with this statement of vocation.

The past year was “a year of pruning” for the Calgary congregation, but that conviction has not wavered for the Huebert or her husband Brad. “We want the church members to be evangelists where they live work and play.”

Summit Church: The Mackenzie campus of SunWest joined ABMB as a separate congregation, now structured independently. They strive to be church for the community in which they live, said pastor Drew Johnson.

The community centre where they rent offered to build storage so they could stop trailering.

What if the post-Christian war we think is coming at us isn’t that scary? Johnson said. “People are so open to the message of Jesus – a presence that brings peace into our lives.”

“When I get a Sunday afternoon text, it’s usually a church planter saying, ‘I gotta tell you about this. Someone just came to Christ,’” said Multiply Alberta director Johnny Thiessen. 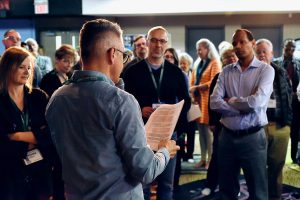 Loewen suggested new Canadians may help ABMB in another priority area for future growth: that of building relationships with Indigenous peoples. “The cultural gap for settler people is big; maybe new Canadians are more gifted.”

“Outrage and hope” were feelings it raised for Alma Siemens of Coaldale. “We need to confess the pride, let the Lord deal with that,” said Siemens of Coaldale. Long ago, her brother taught at a residential school and she had opportunity to meet students some weekends. Now she volunteers as a prayer partner on 100 Huntley Street where she finds particularly joy in praying with Indigenous people who call in.

Following the exercise, churches ate lunch in table groups and discussed what are next steps for ABMB. “In what ways might we collectively move forward with ministering to First Nations in Alberta?” Loewen asked. 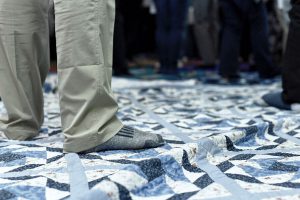 Kendall Feenstra, children’s pastor at SunWest, observed that while children study this history in school, it is the parents who need to learn more awareness.

Chris Woods from Linden observed there are churches on some reserves “living the mission” who could be encouraged instead of supplanted.

Scott Koop from Highland called for more listening before taking action. “In the past, folks in my position might have expected to decide when to move forward, but maybe now our First Nation brothers and sisters could let us know when they have felt listened to; maybe we must wait to be told when the ‘listening time’ is done.”

Reflecting on the dynamic presentation from Goshen Church, Dyck said: “We’re going to have to learn to dance to a new type of music – literally and figuratively.”

At table groups organized by church, delegates also discussed a proposal to adopt an emerging sister church, and discussed financial commitments and other reports.

In open mic time, Kris Peters of Linden encouraged the MB conference to focus on offering practical help to congregations rather than pursuing a vast mission vision. “Mission belongs to the churches,” said Peters. “I wish we would unify around our Confession of Faith, instead of a common conference mission.” 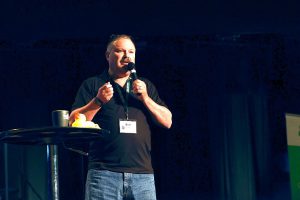 Multiply – “Hope is for everyone,” says a young couple from Highland MB, Calgary, heading to restricted access country. The pair with small children believe they are called to reach people who feel they don’t belong.

Camp Evergreen – We give our guests a good time so they come back so they meet Jesus, says “Ranger Bob” Kroeker. The camp is continuing the Reaching Higher campaign to build a new lodge. “I challenge each church to send 2 volunteers for the kitchen this summer – no matter where you live in Alberta, it’s not as far as from Germany” (from where several volunteers have come for the summer).

Columbia Bible College – “We equip students to consider the local church context as they learn,” said Kurtis Kube, director of the social entrepreneurship program. He urged churches to take advantage of the church matching bursary to help send students to get an education where biblical studies is core. 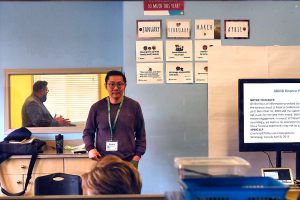 Treasurer Benny Leung clearly and simply explained how the collaborative model simplifies the flow of revenue for Alberta, which previously received some of its funding via the Canadian conference. ABMB’s total budget for 2019 is $334,500.

“If all churches gave five percent [of their revenue], no other resources would be needed [to meet budget],” said Leung.

“This little nation of Canada – God’s hand is on it,” said Fleming. He quoted prophesies from history and pointed to the National Office Review “word from the Lord” delivered to Canadian MBs by Terry Mochar in 2012. “My prayer is that we lift high the name of Jesus, his fame,” said Fleming. 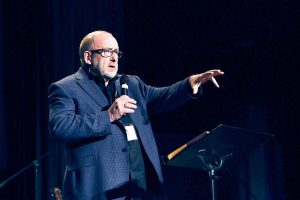 “Jesus is greater – than your dreams, ambitions, etc.,” said Hogg. Have a clear vision of Jesus, your affections centred on him, and your loyalty devoted to his kingship.

Hogg invited delegates to come to the front to respond to the message with prayer and dedication.

“We left sensing God’s presence and encouragement in our lives,” says Loewen.

I was sort of arrested by what you quoted Kris Peters saying: “Mission belongs to the churches,” said Peters. “I wish we would unify around our Confession of Faith, instead of a common conference mission.”

I hope I am misunderstanding his point – which is entirely possible given the short report of his comments and the differing ways in which the word “mission” gets used.

It seems to me the mission of church – local, denominational and world-wide – “belongs” to God and was given to “the church” by Jesus as recorded in the gospels and Acts 1. The mission is that, while we are going into all the world, we are to make obedient disciples. Surely that is the mission of Multiply, the conferences and the local churches.

Now if Kris meant that the strategies and methods for carrying out the mission needs to be locally contextualized, agreed.

“Mission belongs to the churches” is shorthand for the much longer account I gave of the effect of Missional Church Theology on our ABMB provincial conference. We suffer from the fact that Missional Church Theology, though it was very clear on Mission belonging to the Reign of God, has never worked out WHO speaks for that Mission. Because someone must. And it is so that local churches CAN speak for the Mission, and SHOULD speak for the Mission. Unfortunately, Missional Church Theology generally dismisses local churches as the problem it is trying to fix, and so gives little motivation to find out what is actually going on the congregations. But lots is going on. There is Spirit life in the churches, and this Spirit life leads to purposes, and these purposes when joined with the Spirit life of other local churches becomes a Mission. But you will never find out what that organically sourced Mission is unless you pay attention to what is going on locally. As I said in my speech at the ABMB convention, we Alberta churches live at the end of a long string of disappointing “Missions” initiated by conference leaders and coming to nothing. I’m quite sure this is not God’s failure. Rather, we need a better way of hearing what God is telling us about His purposes, and that better way can and should start in the struggles and hopes of our God-founded, Spirit-indwelt local churches.

Thanks for the fuller explanation, Kris. As I wrote originally “I hope I am misunderstanding his point – which is entirely possible given the short report of his comments and the differing ways in which the word “mission” gets used.”