What's New
Tibetans in the Neighbourhood
MCC BC and MDS Flood Response and Partnership
Resilient Leadership: Praying against burnout
Boldly advancing the gospel from our knees
MCC sends food and relief to Cubans in...
Robert Dagenais, pastor of the Sainte-Thérèse church, is...
More donated hay needed to help farmers in...
“God’s time was perfect”
Hope and pray every day
Resilient Leadership: The gift of self care
Home News “Come to the Table” 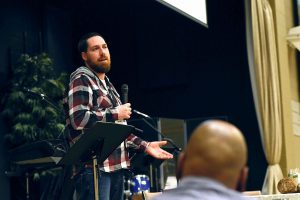 It’s a great blessing to learn from those who are different than you and be together as one, said Derek Parenteau at the 88th convention of the Ontario Conference of Mennonite Brethren Churches Feb. 22–23, 2019, at Glencairn Church, Kitchener, Ont. Plenary speaker at the event, he serves among Indigenous people near Parry Sound, Ont.

But it’s not always easy to come to the table.

Parenteau recounted how local organizations would ask him to help them “get Indigenous leaders to the table” to discuss projects that would impact their communities. Often, he realized, the invitation was not to “the table” but “our table.”

If we spend a lot of energy guarding our image, it is too risky for someone else to participate with us, said Parenteau. 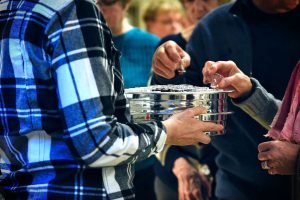 “We all have a strength we need to release, an agenda we need to lay down,” said Parenteau. When it comes to responding to God’s invitation to the table, we must approach in humility. “We come broken, hurting, and empty-handed.”

“How well do we invite people to the table? If I’m being honest, sometimes I only want people at the table who are like me.”

Addressing the conference theme, “Come to the Table,” Hit addressed racism inside and outside the church, building on church planter Derek Parenteau’s plenary address on humility and servanthood.

A fresh move of the Spirit

ONMB executive director Ed Willms called for a return to the table as he addressed the 145 conference attendees from 19 of the 24 ONMB churches and four out of six associate members.

“We are experiencing a fresh move of God’s Spirit,” said Willms. “We’re off life support.” He referenced Terry Mochar’s 2012 report to the Canadian Conference of MB Churches, published in the MB Herald as “A word from the Lord.”

On a discernment retreat together, the board was called to “Come back to the table.” The six men and five women who lead the ONMB board are “united and on mission together,” said Willms.

The merging of congregations is about unity for the glory of God, said Bayne. “God said unity here will be so that the world will know that I love them.”

Good news on the balance sheet

Treasurer Shelley Campagnola’s report continued the good news. “Last year, we asked for more [engagement] than ever. The surplus [we received] tells me God is on the move.” The growth in the budget allows for an increase in programming like Leaders Collective.

In the midst of positive stories of mergers, growth, and other churches expressing interest in joining the MB family in Ontario, there was a difficult story of separation from one congregation. 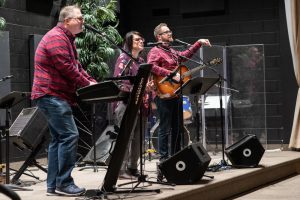 The collaborative model with CCMBC increases opportunities to work together but also highlights the challenges of a voluntary association. “Ed leads by invitation,” said moderator Jeff Jantzi. The ONMB board introduced a draft covenant to serve as an invitation to commit to work together.

Assistant moderator Karen West urged delegates to remember “CUP”: clarity on “what we’re working at together”; unity – a common understanding of our identity; potential – journeying together, growing the Kingdom of God.

Canadian Conference of MB Churches executive director Elton DaSilva echoed the invitation to the table in his greetings from the national conference at the close of the day. In John 4, the woman at the well who was not welcome at the town’s table was invited to Jesus’. “He moved her focus from method to subject of worship,” DaSilva said; “from what we do to who we pursue.” 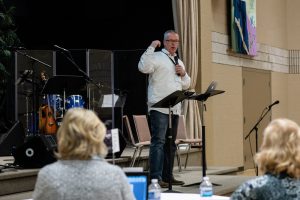 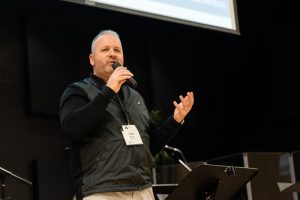 The SLC shares its mission of “leading students to learn of Christ and live in Christ” with the more than 900 students at the public high school Eden through daily chapels, retreats, and service opportunities. Thirteen students on the Epereia leadership team receive mentoring in the program’s fourth year.

“You can’t pray ‘Your will be done’ and push your own agenda,” said Sara Maynard, guest speaker for the Pastors and Leaders Day preceding the Ontario Conference of MB Churches annual convention Feb 22–23, 2019.

The executive director of Redleaf Prayer spoke on the Lord’s Prayer, which she said is the focus of the Canadian prayer movement. “The petitions of the Lord’s Prayer point to revival, calling us to repentance and fresh life in Christ,” Maynard said. 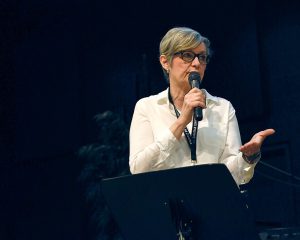 The Lord’s Prayer is a tool for revival, said Maynard, because it guides into a John 15-type of abiding, it unites Christians across traditions, it teaches forgiveness, it changes both those who pray and those who are prayed for, and it is the prayer that Jesus taught the disciples.

“The gospel is a story of adoption,” she said in the second teaching session where she focused on the idea of God as father. When we pray “Our Father,” we invite God into our personal space, to challenge our selfishness and confront the idols of our culture, she said.

“Everything in the Lord’s Prayer is corporate, meant to be prayed for us and by us,” she said. This gospel of community is an antidote to the individualism of Canadian culture and “creates a place for the presence to dwell.”

The Lord’s Prayer leaves no room for unforgiveness, Maynard said. It trains the heart muscles through prayer to respond with forgiveness in the moment.

“It changes us in shocking ways; I can attest.” 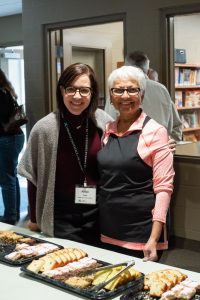 Volunteers and green infrastructure were the story about host church Glencairn. The congregation which celebrated its 30th anniversary in 2018 was pleased to host an event of this scope in their newly renovated building.

Some 20 energetic retirees buzzed around the church, replenishing coffee urns, serving food, and washing the real dishes on which home cooked food was served to delegates in the building powered by solar panels.

“Whenever I asked someone to help, they cheerfully agreed to do their part,” said volunteer coordinator Esther Current. 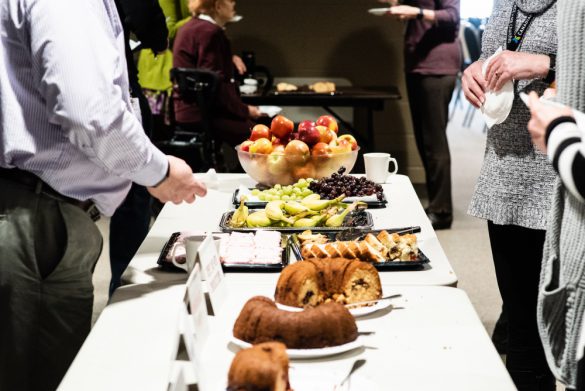 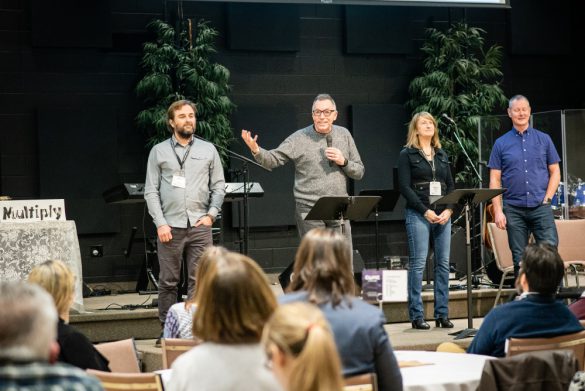 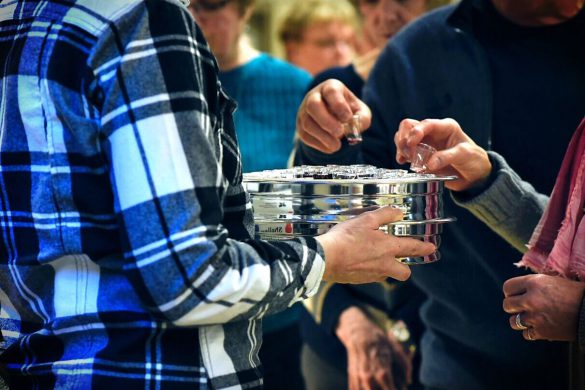