What's New
Through the conflict, life carries on in Ukraine
A FOCUS on Mission
Must Patience Be So Slow?
Harold Jantz: A Heart for the Mennonite Story
Lorlie Barkman: A Life of Creative Engagement
Last Days, First Days
Women in Ministry: Bertha Dyck
January Moment in Prayer “Holy Spirit—Fill Us!”
The Church as the Patient Body of Christ
Advent: Making Much of Jesus: Christmas Day
Home News Church celebrates 90th anniversary 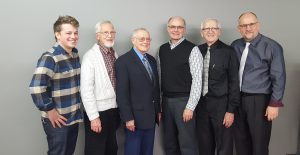 The celebration featured a choir, a display of memorabilia such as choir robes and Boys Brigade uniforms and a lunch of 2,700 homemade perogies. Two of those present at the celebration have been part of the church since the first service when they were five years old.

Steinbach MB Church formed Jan. 3, 1927, with 38 men and 7 women. In 1931, members of the congregation started a Bible school with 9 students hungry for the Word of God; that vision lives on as Steinbach Bible College. Evangelism and service have remained central to the church, which has sent many short- and long-term missionaries and sewed thousands of blankets for MCC. To be Jesus’ hands, the congregation sponsored a Laotian family in 1979, and this past year, began assisting a refugee family from Ethiopia.

Over its history, 1163 members have called Steinbach MB their church home. Intergenerational unity continues to characterize the current congregation of 430 members.