What's New
Leading through the trauma of covid: Part two...
Ask God which town
Where to from here?
CCMBC National Director attends 2022 ICOMB Summit
MCC Canada and MCC Manitoba sell shared property...
The world appears to be growing darker
Sharing a new and unified language
6 reasons to attend the MWC Global Assembly...
One too many
Just one more
Home News Faces of Mennonite Disaster Service in Grand Forks, B.C.

Founded in 1950, Mennonite Disaster Service (MDS) is a volunteer network of the North American Mennonite churches that responds to those affected by disasters in Canada and the U.S. In 2018, 5,203 volunteers from across the U.S. and Canada donated 48,041 days of volunteer labour to do 676 jobs at 15 projects in six states and one province worth over $12.6 million. This included repairing 272 homes, building 74 new ones, and 300 clean-ups.

In 2019, MDS is involved in two projects in Canada; Grand Forks, B.C. and Brantford, Ont.

Below are some of the volunteers who were in Grand Forks in early June – the faces of MDS. 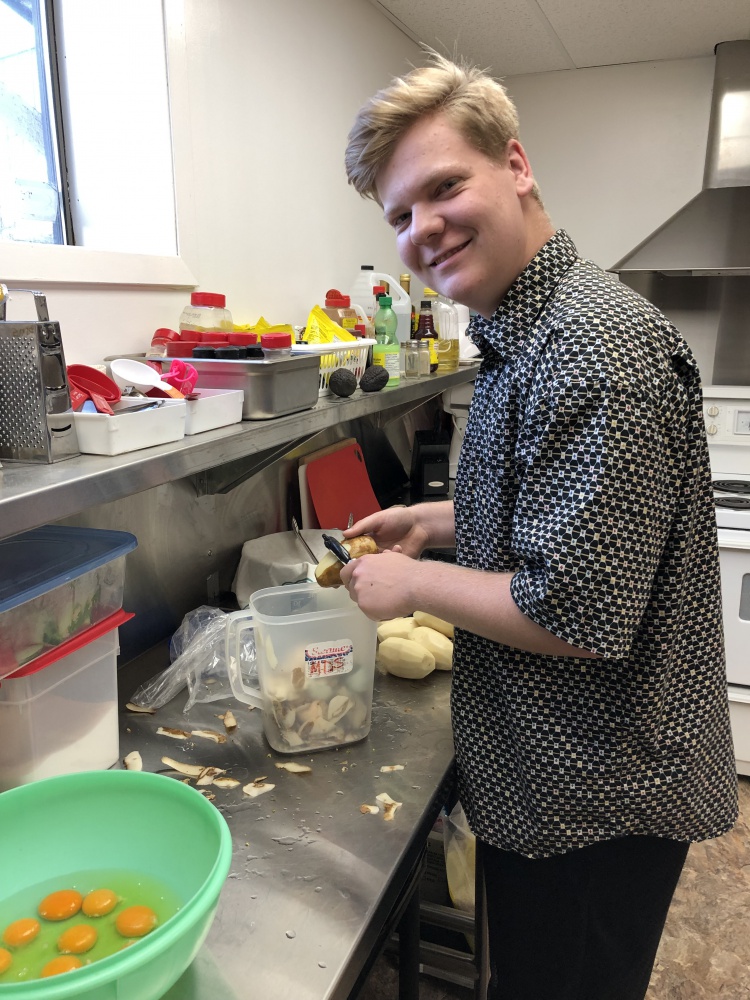 Zachary Bartel wants to be a communicator one day – he wants to tell stories. But first, there are some potatoes to peel for hungry Mennonite Disaster Service (MDS) volunteers in Grand Forks, B.C.

With support from a scholarship through MDS, Bartel is spending eight weeks in the southeastern B.C. city helping people recover from the 2018 spring floods.

Some of that time is spent on work sites, repairing homes damaged by the flooding. But in early June he was assigned to kitchen duty for a week, as an assistant to head cook Rosa Quintana.

“I like cooking,” said Bartel, a member of Winnipeg’s Faithworks (Mennonite Brethren) church. But, he quickly added, “I’m not looking for a career in cooking.”

Of his time with MDS in Grand Forks, the highlight is meeting and talking to clients.

“I love hearing their stories,” he said. 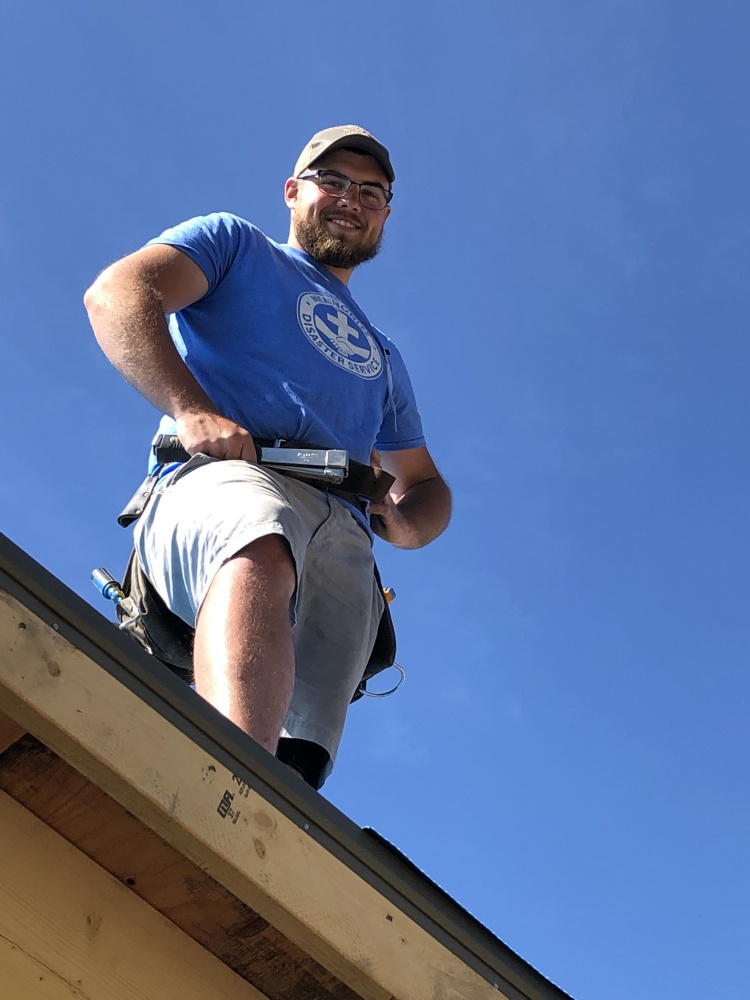 “Never Thought God Cared About Me.”

“I never thought God cared about me, but then MDS showed up.”

The comment was moving for the 20-year-old Steinbach (Man.) Bible College student.

“It was amazing to be part of that, to be a little piece of that puzzle to help him and his family recover,” he said, recalling the conversation.

In fact, encounters like that are among the top highlights for Klassen, who has done service with MDS three times.

“It’s a privilege to walk alongside them in their journey of recovering from a disaster,” he said. “It’s moving when they come see the progress on the house and they tear up.”

Klassen, who is studying to be a youth minister, is being supported by a scholarship through MDS that pays his tuition. In return, he is providing eight weeks of service in the southeastern B.C. city, which was hit by flooding a year ago.

“I love doing hands-on work and putting my skills to good use to help others,” he said. “This is a way to put my faith into action.” 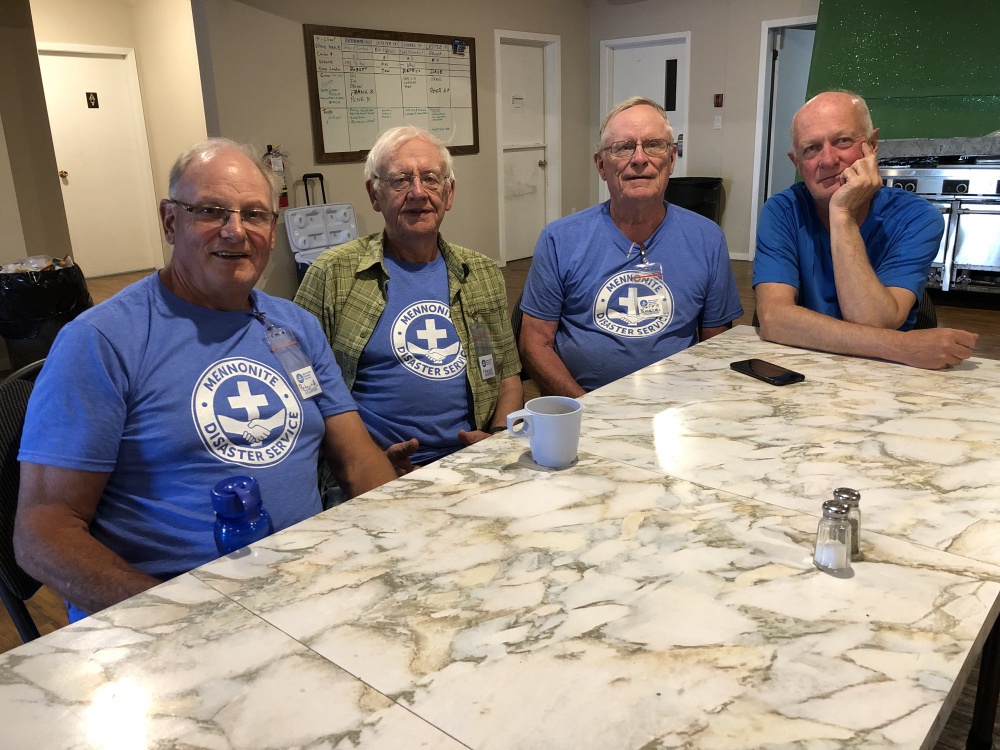 What do you get when you put four retired in teachers in a pick-up truck and head out to do service with Mennonite Disaster Service (MDS)?

The four, who volunteer to repair furniture at the Mennonite Central Committee (MCC) thrift shop in Abbotsford, drove from the B.C.’s Fraser Valley to Grand Forks in the southeastern part of the province to help repair homes damaged in last year’s spring floods.

For Bartel, a member of Emmanuel Mennonite Church, the trip was a chance “work with my hands and be with friends.”

It’s also a chance to give back; he was a child in eastern Europe in 1944 when his family fled from Soviet forces during World War II to safety in the west.

They lived as refugees in Germany for five years, receiving help from MCC, the almost 100-year-old international relief and development organization of Mennonite churches in North America.

Service with MCC and MDS is a way “give back,” he said of his second time doing service with the organization.

Frank Reimer, a member of Grace Evangelical Bible Church, has a similar story. In his case, it involved his father, who received food from MCC in the Ukraine as a teenager.

This is also his second time with MDS. He likes it because he gets to spend time with “some great people,” work with his hands, and to give back.

Ernie Ewert, who is a member of Highland Community Church, a Mennonite Brethren congregation, grew up with stories of how MCC helped his parents in the Ukraine in the early 1920s.

“They were so grateful for the assistance, and to come to Canada,” he said.

Service with MDS is a way to return the favour, and also a great way to spend a week, he said.

“I really like the spirit here,” he said of his first time with the organization. “And I like hearing the stories from the clients.”

Peter Andres was just 17 days old when his parents fled Soviet forces in in 1945. When they got to Germany, they received “care packages” from MCC. The family arrived in Canada in 1951.

“It was a great trip down,” he said of the trip, which he organized.

“The experience is always good with MDS,” he said, adding “it’s a way to show Christian love, to respond to people in need.” 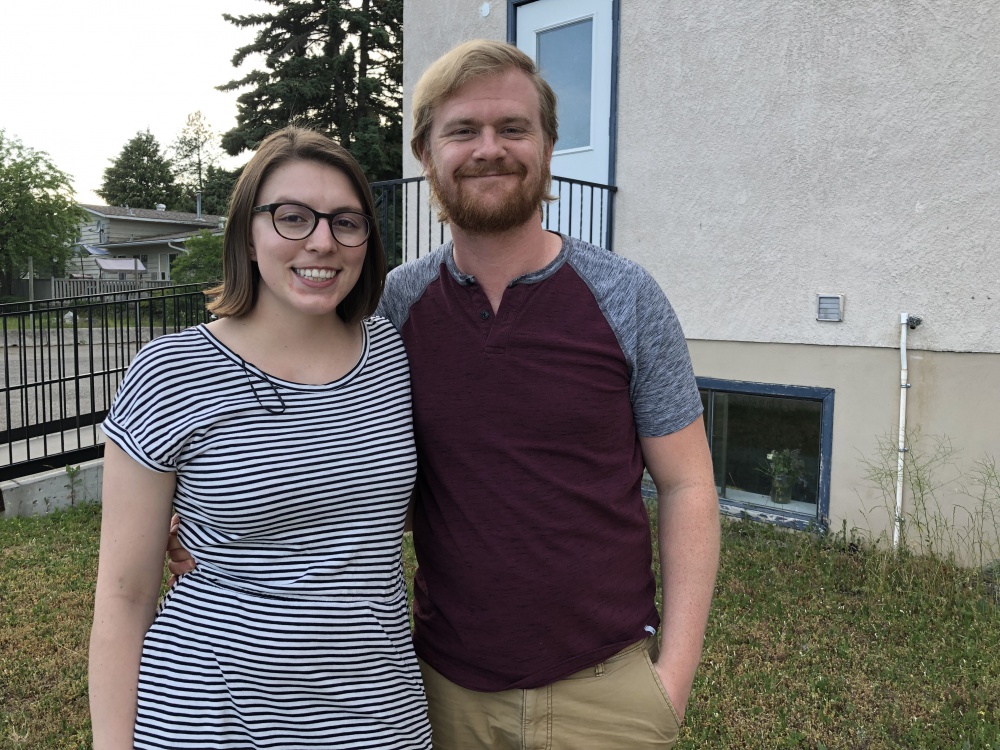 From Mexico to MDS

People who serve with Mennonite Disaster Service (MDS) come from all over North America – and that includes Mexico, too.

That’s where Dietrich Reimer, 25, and Rosa Quintana, 26 are from.

The couple, members of the Blumenau Mennonite Church in Cuauhtemoc, are doing eight weeks of service with the organization in Grand Forks, B.C.

For the two, who are students at Canadian Mennonite University (CMU) in Winnipeg, service with MDS is “a great way to do something together and to serve God.”

“I’ve never laughed so hard as here at MDS,” says Rosa, who is serving as cook of her interactions with other volunteers.

“I love to hear stories from the clients, and be with other volunteers,” adds Dietrich, who is part of a crew working on homes in the community.

Rosa and Dietrich’s route to MDS is a little circuitous; their home church saw pastoral gifts in the couple, who already have university degrees – Rosa has a degree in nutrition and Dietrich is a civil engineer – and offered to pay for them to study in Canada.

While at CMU, Dietrich applied for an MDS scholarship that pays his tuition in return for service, and that brought them to Grand Forks.

“It’s great to be able to make a difference for some people who lost everything,” says Dietrich. 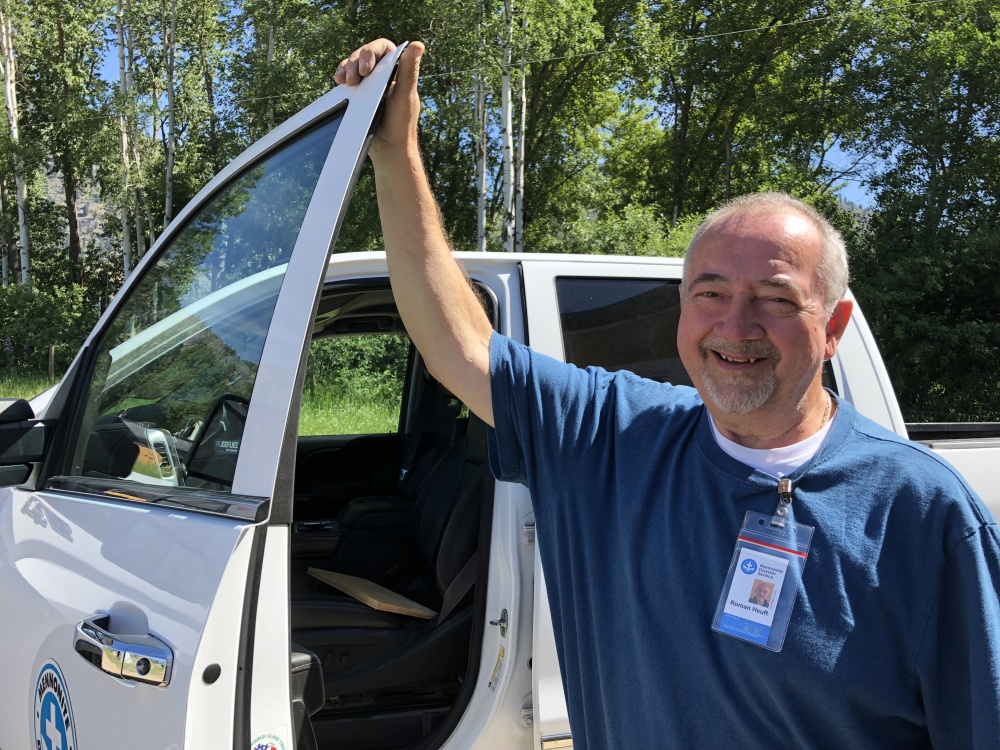 went to Williams Lake, B.C. last year to serve for just a week with Mennonite Disaster Service (MDS) – it was a way to use his career skills in construction management to help people whose houses were destroyed by wildfires.

Then he got hooked.

Now the 66-year-old retiree from Blind Bay, B.C, is the project director in Grand Forks, B.C., supervising crews as they work on homes damaged by flooding in 2018.

When he told his wife, Charlene, about how much he enjoyed serving with MDS, she told him “’you have do this,’” he said. “She said ‘your whole life has prepared you for this.’”

Due to various construction accidents and other mishaps, Heuft can’t do much physical labour.

“My skills are better used now as a project manager,” he said.

As for MDS, Heuft said he “likes everything about it – the camaraderie with the volunteers, getting to know the people we serve. It’s all very rewarding.”

He also likes the opportunity to teach construction and repair skills to volunteers. “As leaders, we’re also teachers,” he said, adding “we always want to make sure every volunteer has meaningful work they can do.”

As director, he also tells volunteers their time with MDS is about more than building and repairing.

“I tell them the most important thing they will do each week is put down their tools and listen to clients,” he said. “That is an important part of their healing process.”

That and to keep hydrated, work safe, have fun, and “get the job done for the Kingdom of God.”