What's New
6 reasons to attend the MWC Global Assembly...
One too many
Just one more
A safe place in Winnipleg
When the sent are sent away
Leading through the trauma of covid: part one...
Church of Lithuania supports Ukraine Christians
A mennonite heart for refugees
A great time for building relationships
Multiply announces new General Director
Home Arts & Culture Yoder calls for Christ-directed nonconformity 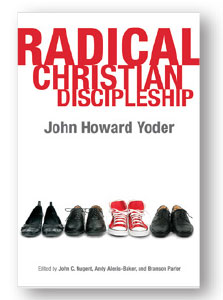 Yoder for Everyone series

Repacking previously unpublished speeches and writings of the late Anabaptist theologian and ethicist John Howard Yoder, Radical Christian Discipleship brings the work of this brilliant but at times inaccessible scholar to the average reader. Most of his previously published books have been for the academic world. Here, we have a collection of his thoughts that were originally presented to an everyday audience. This volume invites the average reader to hear Yoder’s challenge to the church.

So what is Yoder’s challenge? Yoder discusses the importance of nonconformity, not for its own sake, but arising from our deep relationship with Jesus. He calls Christians to be committed to neither conservative separation from the world, nor outright liberalism. We ought not automatically say “no” to the things the world is doing, nor automatically say “yes” either. It takes careful consideration of each area of a Christian’s involvement with the world to discern the best possible steps.

Radical Christian Discipleship covers topics familiar to Anabaptists: pacifism, matters of money and time, loving others unconditionally, truth-telling, etc. In some subjects, such as Yoder’s conversation around economics, he reinforces commonly held beliefs of stewardship, but with new insights and deepened theological support. On others, such as loving one’s enemies (also covered in a forthcoming volume), he exposes common gaps in the understanding of a Christian’s involvement in both the political and personal side of war. We are called to not only avoid violence, but to actually change our mindset about those our country is fighting. We cannot avoid war, yet continue to carry negative perceptions of our countries’ enemies. Loving one’s enemies goes beyond the actions and into the matters of the heart.

One particular point that challenged my thinking was Yoder’s perspective on time. Time, like money, is something we have been given that belongs to God but is our responsibility to use appropriately. Yoder begins with a note on the entertainment industry: “There is no shortage of industries set up to provide ‘entertainment.’ Sometimes this term refers to culturally valuable ways of spending time. More often the time is simply ‘killed,’ leaving the ‘entertained’ only the poorer for their expenditure.”

When we were redeemed (bought) by Christ, Yoder writes, “God became owner not only of our bodies, but also of our time and money.” So what does it mean for us to live lives of temporal stewardship? Certainly not mean “killing” time, Yoder notes. (He would even go so far as to speak of the destructive, or murderous, nature of this unwise use of time.) It means we are to budget our time appropriately in a way that enables us to serve the kingdom most fully. Yoder writes that there is no distinction between activities like work or school and those we consider spiritual, like prayer and corporate worship). Every aspect of our lives becomes part of our spiritual stewardship of time. Approaching each act throughout the day with the right mindset causes us to see each as a part of our spiritual responsibility.

Perhaps a more difficult challenge to hear is Yoder’s identification of “respectable worldliness”:

Worldliness is not a specific action or set of actions that are wrong because they are forbidden. If that were the case, doing the right thing would simply be a matter of avoiding forbidden activities. Worldliness is not a special sort of depravity. It is the normal behaviour of worldly people. It is any thought or behavior whose first concern is not God’s kingdom and God’s righteousness. And since worldly people can be quite respectable, there are also respectable forms of worldliness.

Ouch! How often have we been concerned with finances over God’s kingdom? “Respectable worldliness” is difficult to avoid and easy to justify. In fact, before reading this chapter I would have considered many of the things that Yoder mentions in this chapter (financial planning, insurance, etc.) to be wise ways of investing the money that God has given us. But this, as Yoder notes, becomes wrong when our possessions become a substitute, to our faith. “Jesus tells us that seeking after wealth is a sign of anxiety, not industry or respectability. Not knowing or daring to trust God, unbelievers seek substitutes to reassure themselves.” This could just as well be true of believers.

The second aspect of “respectable worldliness,” and perhaps the most difficult for North Americans to really confront when all we see around us is advertisements and worship to a god of materialism, is that prosperity has become considered to be “the normal condition of a person.”

Another major challenge I took from the chapter on “respectable worldliness” – one that applies to every aspect of our lives with Christ – is tithing. Given all I’ve been taught on the importance, necessity, and rewards of tithing as I grew up in faith, I was astounded by Yoder’s words on the subject.

What matters most is the use we make of our means. The Pharisees in Jesus’ time, and many believers in our day, felt that this duty was done with the tithe. Yet Jesus’ only mention of the tithe was unfavourable. He did not object that it is too much to ask, but that it is 10 times too little. It hides the real problem of stewardship, which is that every cent belongs to God and must be used to God’s glory (emphasis added).

These posthumously published speeches and writing challenge our current understanding of discipleship, offering a different – perhaps deeper – theological viewpoint than we have heard in the past. Though it requires a willingness to engage with complex concepts, the book is quite readable, and should be recommended to any serious Christian thinker.

Radical Christian Discipleship is the first of three books as part of the collection of Yoder’s writings. The next installment, Revolutionary Christian Citizenship, is slated to be released later this year while the third book, Real Christian Fellowship, will come out in 2014.

Spencer Nikkel is in his third year of studies toward a BA in biblical studies and TESOL certificate (Teaching English to Speakers of Other Languages) at Bethany College, Hepburn, Sask. He is originally from Lundar, Man.