Creation and redemption “hold together” in Yoder’s theology 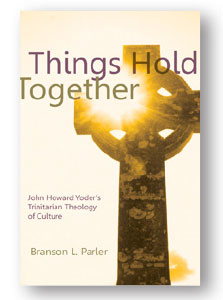 People tend to slot John Howard Yoder (1927–1997) and Anabaptists in general as those who focus on Jesus (and pacifism), but ignore the Old Testament, creation, nature, natural law. In Things Hold Together, Branson L. Parler is concerned to demonstrate, contrary to those critics, that Yoder is indeed a thoroughly Trinitarian thinker: the biblical themes of creation and redemption “hold together” in Yoder’s theology.

This isn’t an abstract question for Yoder –  it’s intricately connected to the church’s life and witness in the world.

Parler’s assertion that Yoder’s work always grapples with the problem of how to “articulate theologically the coherence and continuity between God’s work in creation and redemption” may surprise some. After all, a common criticism against Yoder is his view of the state and the sword. Yoder focused too narrowly on the humanity and life of Jesus, some argue, so he doesn’t sufficiently account for creation and the biblical evidence for natural law which theologically grounds the necessity of the sword-bearing state. In chapter six, Parler confronts this criticism. For him, this is the result of a much too narrow (and uninformed) interpretation of Yoder.

Parler bluntly states, “This book is my attempt to spell out why I see this way of reading Yoder is wrong.” The problem? We must not begin and end with The Politics of Jesus, one of Yoder’s first and most familiar books; we need to read his work “wholly and holistically.” This poses a challenge because Yoder never attempted to write a systematic theology that summarized his thought. Yoder wrote many books and articles, some which have been only published posthumously in the past decade. (See review of Radical Christian Discipleship.)

To begin, Parler situates Yoder’s work as an ongoing response to Reinhold and H. Richard Niebuhr, who greatly influenced North American theology and ethics in the 20th century. Yoder’s theology is an alternative response to Reinhold Niebuhr’s claim that “Christians who embrace the nonviolent ethic of Jesus are right, but…render themselves politically irrelevant and socially irresponsible” (Parler quoting Gerald Schalbach).

The problem, according to Parler, is that the Niebuhrs’ social ethics are not sufficient theologically. Yoder and the Niebuhrs differ on “how to understand the biblical and theological distinctions between creation, fall, and redemption.” Parler concludes that while the Niebuhr brothers use Trinitarian language in relation to ethics, it lacks substance. In contrast, Yoder’s Trinitarian theology does not.

The problem of creeds

That Yoder has a robust understanding of the Trinity, rooted in the Nicean and Chalcedonian creeds, is one of Parler’s most bold and controversial arguments. The reason many dismiss Yoder as anti-creedal (and thereby not thoroughly orthodox) is that “they often jump straight to what Yoder says about the creeds without examining how his view of the creeds fits within the context of his broader theology.” The problem for Yoder is not the dispensability of the creeds, but adequately interpreting and translating them.

Certainly Yoder’s view of the creeds is not without criticism, but Parler demonstrates Yoder’s affirmation as well. For example, rather than an abstract theological claim about Jesus, Yoder saw that the Chalcedonian creed, which confesses Jesus as truly God and truly human, has clear links to discipleship: “If Jesus really is human,” Parler writes, “then the ontological language of the creeds explodes into all arenas of theology and ethics that have implications for our humanity.”

This leads to the theme of the rest of the book: the relation between Christ and culture. In chapter four, Parler explores in considerable depth Yoder’s Christology. Parler synthesizes well how Yoder’s exegetical and biblical theology attempts to demonstrate the meaning of the Messiah in the context of both Old and New covenants, connecting Christology with creation and the Bible’s wider ethical concerns. I found this a very interesting chapter, giving insight into Yoder’s biblical hermeneutic.

Here, we see how Yoder “holds things together.” (Colossians 1:15–17 is one such key text.) Yoder contends, “In him [Christ] everything ‘systematizes,’ everything holds together. This ‘everything’ that Christ maintains united is the world powers. It is the reign of order among creatures; order which in its original intention is a divine gift.”

Dealing with the powers

The preceding quote highlights the language of “world powers.” This is the link between the concepts of creation and culture. The biblical language of “powers and principalities” (Colossians 1:16; Ephesians 1:21) introduces a long and complicated interpretive history. But for Yoder, “redemption neither annihilates the Powers nor eradicates human power. Rather redemption rehabilitates both true human power and the Powers.”

But this raises the problem mentioned earlier. Is not the sword-bearing state a creational power? Is it not an unavoidable aspect of culture? According to Parler, “Yoder shows from Scripture that the sword-bearing state is not rooted in God’s original creational intent, but in God’s post-fall preservation of the world. God’s providential allowance for the sword must not be confused with God’s creative and redemptive will.”

The final chapter is provocatively called “The Spirit Pioneering Culture.” Yoder’s metaphor of the church as a pioneer people filled with the Spirit conveys “the missionary posture of the church as fundamentally for, not against the nations.” Parler’s aim is ultimately to show how Yoder’s Trinitarian theology – sufficiently holding together creation and redemption – translates ecclesiologically. In other words, what does our understanding of God look like in the life of the church? It raises the thorny problem of the church’s relationship to the world.

This area of Yoder’s thought is still being assessed (see Paul Martens’ The Heterodox Yoder for another interpretation of Yoder), especially his understanding of the sacraments, and how the church peaceably bears witness to Christ in the world.

Things Hold Together is well-written and argued. However, one criticism is that, since the word “culture” is such a slippery word, a working definition would have been helpful for clarity’s sake. That aside, for those who are critical of Yoder, the book demands that he be read “wholly and holistically” before making (or maintaining) unfair judgments and characterizations of Yoder’s theology. If one wanted to seriously test Parler’s thesis, engagement with entire corpus of Yoder’s work is necessary.

Branson L. Parler’s contribution to the ongoing assessment of John Howard Yoder’s theological legacy grew out of Parler’s dissertation at Calvin Theological Seminary. Now a professor of theology of Kuyper College, Mich., Parler is one of what the back cover calls “a growing number of writers from outside the Anabaptist or Mennonite traditions who are finding resonance with Yoder.”

The book is quite academic and may not appeal to everyone. However, I recommend it to students, pastors, and scholars interested in theology. Furthermore, this book would benefit those interested in how missional ecclesiology is rooted theologically. Finally, whether one agrees with Parler or not, through his examination of Yoder’s work, Parler raises fundamental questions about the nature of God, how we interpret Scripture, and how the church bears witness to Christ in the world in such a way that will certainly stimulate and challenge your thinking. It may also entice you to pick up a book by Yoder you haven’t read yet.

—Alex Suderman is associate pastor at Kitchener (Ont.) MB Church and is working on his PhD in religious studies at McMaster University, Hamilton, Ont.