The Mennonite Brethren Historical Commission met June 8 and 9 for its annual general meeting in Hillsboro, Kansas, at Tabor College’s Center for Mennonite Brethren Studies. The Commission heard reports from its four archives, awarded grants and scholarships, and planned for ways to continue to serve M.B. congregations in both the U.S.A. and Canada with “useable” historical research.

An Archival Development Grant of $2,500 was awarded to Bert Friesen for his computer coding project that links a search mechanism with the original source image of the indexed Mennonitische Rundschau, 1910–1919. This online tool will link an index entry to the scan of the referenced page in the Rundschau. For readers with limited facility in Gothic German print, this tool will be a valuable resource. The Rundschau has been called the “Facebook” of early 20th-century Mennonite communities on both sides of the Atlantic.

An MB Studies Project Grant of $2,500 was awarded to Anicka Fast for her Ph.D. dissertation project: “Living in the same house: Contested ecclesial identity in the Mennonite and Mennonite Brethren missionary encounter in Congo, 1912–1989.” Like other sectors currently receiving attention (e.g., Mennonites and the Holocaust, Mennonites and Canadian “Indian Day Schools,” etc.), Anicka’s project considers Mennonites and the mission sector, exploring aspects of the Mennonite story that may be disturbing, given our contemporary sensibilities.

A second MB Studies Project Grant of $1,200 was awarded to Christine Longhurst for phase one of her project that explores the rise of contemporary worship patterns in Canadian Mennonite Brethren churches over the past 30–40 years, specifically, the shift from traditional, hymn-based congregational song to contemporary worship music. In this first phase, Christine will collect first-hand accounts of the process from those who held leadership roles in M.B. churches and institutions during the transition years.

A Katie Funk Wiebe Research Grant of $650 was awarded to Lisa Cornish for her M.A. thesis project: “Listening for the female ministry voice: Mennonite women sharing faith through cookbooks.” Lisa plans to explore the relationship between food preparation/recipes and theological reflection/articulation. While Mennonite cookbooks typically don’t designate much space for theological comment, the theological drivers are often still visible. Her project will bring scholarly attention to women’s roles in Mennonite churches and to the importance of material culture (food and recipes) in everyday Christian faith. 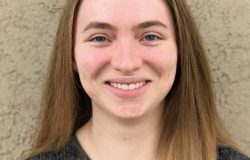 At the Hillsboro meeting, the Commission also heard Emma Sorensen report on her five-week archival internship. She helped with the normal archival tasks at each of the four MB archives and explored the formation of the institutions that became part of the Mennonite Mental Health Services, staffed initially by Conscientious Objectors (Canada) and Civilian Public Service (U.S.A.) workers during the Second World War.

The Commission agreed to continue funding the six initiatives that it has developed in the recent years (archival internships, Katie Funk Wiebe research grants, M.B. studies project grants, J.B. Toews college scholarships, G.A.M.E.O. stipends, and archival development grants), even as the subsidies from its two owners have been reduced. For details about all initiatives—and the news releases announcing past recipients—see the Commission’s website (http://mbhistory.org/).