What's New
One too many
Just one more
A safe place in Winnipleg
When the sent are sent away
Leading through the trauma of covid: part one...
Church of Lithuania supports Ukraine Christians
A mennonite heart for refugees
A great time for building relationships
Multiply announces new General Director
Multiply May Ukraine updates
Home News “Facebook” of a century past 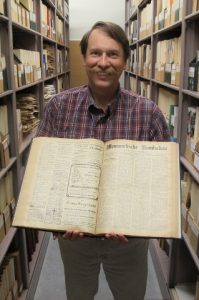 Conrad Stoesz displays a copy of the Mennonitische Rundschau

The long-awaited volume 4 subject and author index to the internationally read Mennonitische Rundschau has been completed thanks to Bert Friesen, with financial support from the D.F. Plett Historical Research Foundation. The 1,394-page index provides simplified access to the German-language paper in the years 1910–1919. Friesen indexed the periodical with a fine-toothed comb so that researchers could find the proverbial “needle in a hay stack.”

The index represents an intellectual organization of the vast and varied contents in the paper. Friesen believes that providing an index was urgent because increasingly fewer people in North America have the skills to read the German language, especially in the Gothic script. This index is designed for the English reader, giving students, scholars, genealogists, community historians, novelists, film producers, etc. pointers to information they want, which makes working through the archaic font manageable.

If the index were taken apart and laid out, it would cover 820 square meters of space. In contrast, the paper that Friesen read was published once a week and had 16 pages and covers 5,491 square meters. The index is now the key to accessing the contents in the paper.

In 1910–1919, the Mennonitische Rundschau was published in Scottdale, Pa. The paper began publishing in 1878 and ended in Winnipeg in 2007, making it one of North America’s longest-running German-language papers.

It was the Facebook of 100 years ago. It was a forum where average people would write about their family and community so that relations in the next province or continent could stay connected. As the Mennonite community spread from Russia to Canada and the U.S., the Rundschau kept family and friends connected.

The creation of this index has been six years in the making and accompanies volumes 1–3, 5 and 6. Friesen has been the workhorse behind the indexing project that saw its first volume published in 1990, covering the 1880–1889 decade. He is responsible for volumes 1–4. The index itself shows the vast range of topics people were writing about: farming, war, weddings, anniversaries, courtship, health, births, deaths, earth quakes, blizzards, missions, worship, airships, dreams, Eskimos, insects and discipleship, to name a few.

—Conrad Stoesz is archivist at the Centre for MB Studies. This article first appeared in the Mennonite Historian.

For inquiries about Mennonitische Rundschau index volume 4, contact the Centre for Mennonite Brethren Studies. Digital copies of the other five indices can be found on the Centre’s web site: http://cmbs.mennonitebrethren.ca.