What's New
A FOCUS on Mission
Must Patience Be So Slow?
Harold Jantz: A Heart for the Mennonite Story
Lorlie Barkman: A Life of Creative Engagement
Last Days, First Days
Women in Ministry: Bertha Dyck
January Moment in Prayer “Holy Spirit—Fill Us!”
The Church as the Patient Body of Christ
Advent: Making Much of Jesus: Christmas Day
Advent: Making Much of Jesus: Fourth Advent
Home Life & Faithinspirational A disciple-sending church 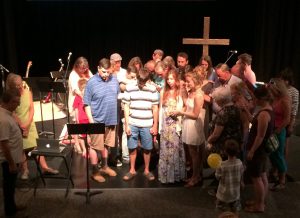 The Rock Church congregation offers commissioning prayer for members Matt and Janelle Picard who are moving away. PHOTO: courtesy The Rock Church

I remember the day well: on Valentine’s Day 2009, our family of four moved to Squamish, B.C., with the call to plant a church in this beautiful town.

Prior to moving, we spent 18 months praying, discerning and being assessed and equipped through the C2C Network (then Church Planting BC). Their support – along with Westside Church, Vancouver, and later Northview Church, Abbotsford, B.C. – was instrumental to our becoming financially independent 18 months ago.

When we arrived we had dreams, a clear vision and even a few plans, but we had no core group, nor did we know anyone in Squamish. By the Lord’s grace, The Rock Church held its first Sunday gathering with a core group of 16 adults and 12 children seven months later on Sept. 27, 2009. It was an exciting start.

One vision we had was to start a discipleship school called Base Camp to bring young men and women to Squamish to make Jesus known to the young, adventure-seeking men and women who are drawn to this mountain town. Through the Lord’s provision, we purchased a building in the downtown core, which opened in fall 2012 with church offices, classrooms, a vibrant café and live music venue. It was an exciting beginning.

Then, plans for the discipleship school stalled.

Squamish has been booming, but, at the same time, young families who find it hard to afford a home are moving away.

I thought our dream had not been fulfilled, until it dawned on me in a conversation with my C2C coach: Base Camp has happened, just not as I had envisioned.

From the very first Sunday, our goal was to focus on making Jesus known in the everyday and making disciples who make disciples.

That original dream and vision has been fulfilled by becoming a disciple-making and disciple-sending church.

This past year, we have sent away 12 of our most dedicated servants. One such couple is Matt and Janelle Picard (pictured) whom we commissioned to make disciples in Port Alberni, B.C.

We pray Luke 10:2 at 10:02 every day, and the Lord of the harvest continues to send us new disciples to love and train up. We may never break the 150 or 200 levels, but we still have dreams!