What's New
Through the conflict, life carries on in Ukraine
A FOCUS on Mission
Must Patience Be So Slow?
Harold Jantz: A Heart for the Mennonite Story
Lorlie Barkman: A Life of Creative Engagement
Last Days, First Days
Women in Ministry: Bertha Dyck
January Moment in Prayer “Holy Spirit—Fill Us!”
The Church as the Patient Body of Christ
Advent: Making Much of Jesus: Christmas Day
Home News Ultramarathon cyclist depends on God

Five “theatres” offered multiple film options at a given time and several screenings were followed by a talkback or filmmaker interview. 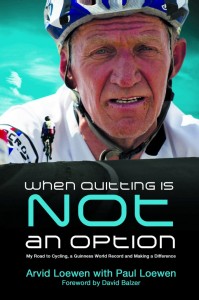 When Quitting Is Not An Option
Todd Cantelon, producer
TMG
30 minutes

These four words spoken by a Kenyan child struck a chord with me as I watched this documentary. She is one of many children abandoned by family only to be rescued by Charles Mulli, founder of Mully Children’s Family (MCF). MCF has successfully saved 7,500 street children, many of whom are now studying at universities in Kenya and around the world.

What does this have to do with ultramarathon cyclist Arvid Loewen of Winnipeg? The member of North Kildonan MB Church member has raised more than $3 million for MCF.

When Quitting is Not an Option follows Arvid through several of his cycling endeavours and the numerous difficulties that come along with them. His story is told in clips from his latest Race Across America (RAAM) in 2013 and his race across Canada in 2011 that earned him a Guinness World Record.

Arvid shares his journey that started with his initial meetings with MCF, including an encounter with a little girl named Charity who made the cause real for him.

In one scene, we see Arvid biking across Canada. His legs have been retaining fluid and he has been hallucinating. He nearly gives up, but as he remembers the children at MCF and the adults who failed them, he knows he can’t be one of them. After resting 17 hours, he gets back on his bike. Shortly thereafter, he meets with Charles Mulli who prays for him, giving him the resilience to keep on going.

Arvid’s motivation for all this effort? “As Christians, we need to put actions into what we believe.” That’s a good reminder for all of us.

Some people might think that biking across a whole country is only for radicals, not ordinary people. Although we may never pick up a bike and cycle thousands of kilometres, we should remember we can accomplish much, if we just allow God to take control. The documentary is an inspiration to turn to God when faced with adversity.

The release of the documentary corresponded with the launch of a book of the same title, written by Arvid’s son, Paul Loewen.