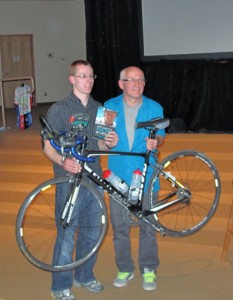 Fundraiser for Mully Children’s Family. Ultramarathon cyclist. Finisher of the Race Across America (RAAM). Guinness World Record holder. But most of all, grandfather of eight Arvid Loewen wants to be known as an ordinary person.

Achievements aside, Arvid was summed up by Member of Parliament for Kildonan-St Paul Joy Smith who awarded him the Queen’s Diamond Jubilee Medal in 2013: “You don’t give up.”

“You touched my heart so much,” said Smith at the Feb. 19, 2014, launch of Arvid’s biography, When Quitting is Not an Option, at North Kildonan MB Church, Winnipeg. Sharing and open mic time with the author and subject were preceded by screening a TMG documentary filmed by Todd Cantelon at RAAM 2013.

A hardscrabble immigrant kid from Paraguay, Arvid rose to success as a semi-professional soccer goaltender, then as a vice-president at Palliser Furniture in Winnipeg, but at mid-life, having fallen in love with endurance cycling and having his heart broken by a Kenyan orphan child named Charity, he dedicated himself and his cycling to raise money for Nairobi’s Mully Children’s Family to help more children like her.

Arvid’s story is told in his own voice through the writing of his son Paul Loewen, a fiction author for whom the volume by Castle Quay Books is his first work professionally published work.

Paul didn’t want to just write a biography (“those can be boring”), nor a cycling book which would have a narrow audience. “I wanted to tell a story,” he says, “of defeat, and failure, and success.” 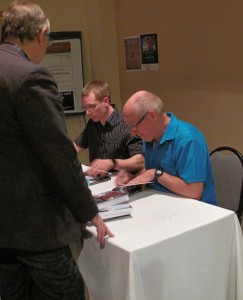 “I tried to address the ‘Superman’ complex,” he says – not Arvid’s high opinion of himself, but that held by others. “He’s an ordinary person,” says Paul. He didn’t shy away from Arvid’s defeats; the first chapter recounts Arvid’s failure to complete RAAM in 2008.

“He’s turned things over to God,” says Paul. In his darkest moment, Arvid’s prayer changed from God, help me do this, to God, I can’t do this. Surrendering himself to rely on God’s strength means, “I am no longer responsible for the outcome,” Arvid says. “I’m only responsible to do my best.”

“We give up before we have to,” he says. Cycling across Canada in less time than some take to drive it, barely able to keep his caloric intake in line with his energy output, and living off two hours of sleep a night, Arvid is familiar with the desire to give up. But, “I’ve reached the bottom of the barrel and realized it’s only the beginning.”

It’s God who keeps him going; God, and the Kenyan girl Charity and hundreds like her. Admitting he kept his faith quiet during his soccer years, Arvid is now eager to share his source of life. “Eighteen years ago, I thought, if cycling will create a platform to share my faith, I’ll do it.” It has and he does.

“We’re all capable of more,” says Paul. “My dad has challenged me. I hope [his story] will inspire you: there’s more each and everyone of us can do.” 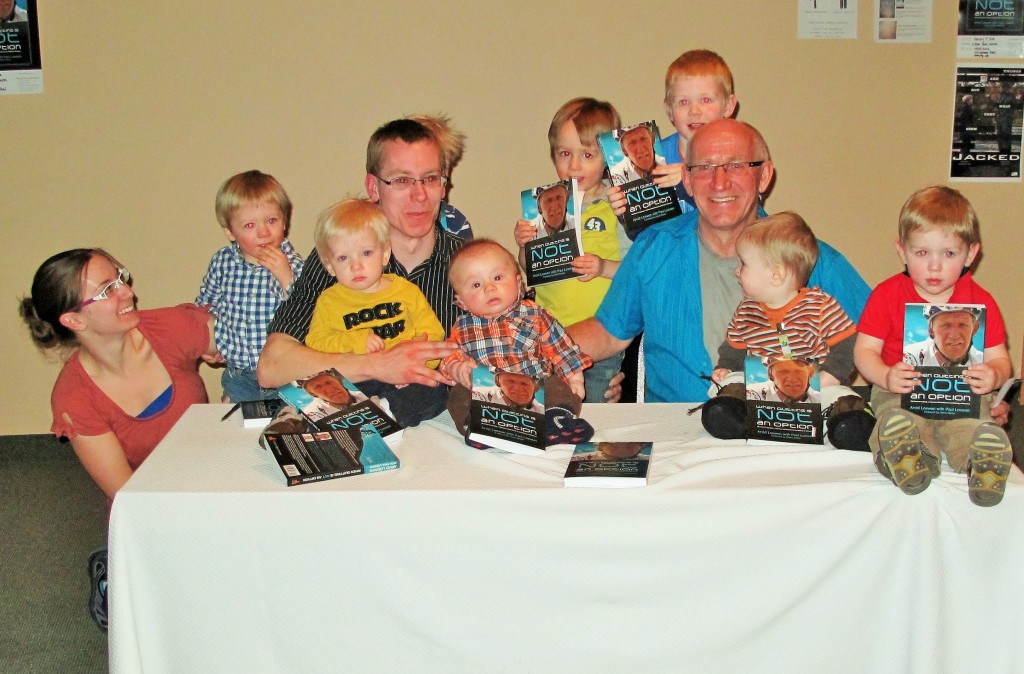 “Grandpas Can” Arvid Loewen, biographer and son Paul Loewen, and the 8 grandchildren