What's New
Multiply September Ukraine Updates
Volunteers in B.C. honour Leamington woman tragically killed...
Delete or not to delete, that is the...
Believers bring water for drought baptism
Encouragement to those in the arena
Keeping attention and making an impact: A few...
Open hands to reconciliation
From the editor
Approaching truth and reconciliation with love in our...
MB Seminary offers new MA in Transformational Leadership...
Home Arts & Culture A life of possibility 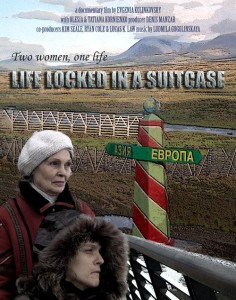 Life Locked in a Suitcase

Olesia does whatever she sets her mind to: dances the salsa, publishes books and climbs mountains – literally and figuratively. What makes this remarkable is that Olesia has cerebral palsy. Her 70-year-old mother must carry her up stairways in a country where many doors to people with disabilities remain closed.

Though it conveys the value of the inside over what we see, the sad Life Locked in a Suitcase is a misnomer for this hopeful documentary. This hopeful mother-daughter story celebrates a determination powerful enough to break barriers and unlock potential.

Thirty years ago, Olesia Kornienko was born with cerebral palsy. In Labytnang, Siberia, her mother Tatiana fought in vain for basic services and education. Olesia received her first wheelchair at 15 on a visit to Warsaw, Poland.

Upon moving to Warsaw in 1992, the pair finally found acceptance but not wheelchair accessibility. Nevertheless, Olesia studied journalism until she became too ill from barely eating or drinking – the only way she could last all day at a university without any accessible washrooms.

When friends gave Olesia a typewriter, she says, “God healed me.” Olesia’s artwork and translations of her poetry offer viewers the clearest view into her pain, her optimism and her often-overlooked intelligence. After seeing wheelchair dancers in a movie, Olesia began training to perform in salsa competitions, which inspired her first poetry book, Dancing with the Stars.

Unfortunately, the English subtitles were difficult to read, and the overpowering piano music, Canadian street interviews (designed to contrast with Olesia’s situation) and the re-enactment of a dinner with her boyfriend’s family were artistically discordant.

The film’s opening suggests Tatiana has sacrificed her dreams to raise her daughter, but these dreams are never verbalized. Olesia and Tatiana are happy together. Viewers can expect to feel gratitude for the doors they are able to open and a twinge of jealousy for a remarkable friendship.

Thank you for your review! It’s quite heartfelt and fair.
Except for one comment about Tatiana’s dreams. There is no suggestion in any part of the film that “Tatiana has sacrificed her dreams to raise her daughter”. That’s why “these dreams are never verbalized”. Tatiana has devoted her life to her daughter. Olesia has become the purpose of her life. And that was verbalized many times :)
P.S. From my personal experience, subtitles in foreign films are always hard to read. So what can you do about it?