What's New
Delete or not to delete, that is the...
Believers bring water for drought baptism
Encouragement to those in the arena
Keeping attention and making an impact: A few...
Open hands to reconciliation
From the editor
Approaching truth and reconciliation with love in our...
MB Seminary offers new MA in Transformational Leadership...
Multiply August Ukraine Updates
Book Review of Return Stroke: Essays & Memoir...
Home News Tribute to Bill Schroeder

Bill Schroeder is one of this generation’s giants in Mennonite historical research. Though he was not a professional historian, his books are frequently cited in professional and lay books, articles, research papers, etc.

Raised on a farm near Horndean, Man., Bill obtained a BA and BEd at University of Manitoba, Winnipeg, and taught high school for many years, first in Clover Plains, Man., later in Winnipeg.

In 1969, Schroeder appeared before the Board of Reference and Council to be approved for the task of organizing the board’s vital documents. Thus began his hundreds of hours of volunteering at CMBS. In addition to performing organizational and research tasks, Schroeder also contributed practical help, building shelves, binding books, and preparing the Mennonite Historian for mailing.

The jewel in his publishing legacy is the best-selling Mennonite Historical Atlas, produced with Helmut Huebert in 1990 (revised and expanded, 1996), which has sold more than 7,000 copies to date. The maps in the atlas – of areas Mennonites settled in the Netherlands, Prussia, former Soviet Union, Canada, and Latin America –represent more than 30 years of research in the age before keyword searches, electronic databases, email, and Skype. But the atlas is only the “tip of the iceberg” of Schroeder’s contribution to Mennonite historical research: the full corpus of 205 maps are housed at the Mennonite Heritage Centre for distribution via the Centre’s web site.

Schroeder made eight trips to the USSR/Ukraine (several times as a tour guide) which informed not only his maps but also books including The Bergthal Colony, (1974, revised 1986) and Kornelius Erdmann Buhr, 1826–1885 (1976). In 1992, he translated The History of the Church in Chortitza: Towards an Understanding of the History of the Church in the Mennonite Colonies in South Russia, by Johannes van der Smissen. 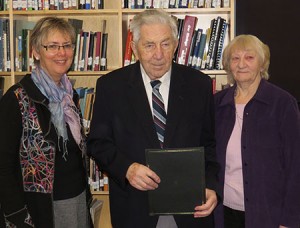 Bill was recognized by the Mennonite Historical Society of Canada with the Award of Excellence in 2013. “Bill Schroeder characterizes some of the best in Mennonite historical research with his quiet tenacity, humble demeanor, and collaborative working style,” said society member and denominational archivist Conrad Stoesz on the occasion. “Through it all he remains cognizant of relational dynamics and strives for excellence.”

Donations to honour his memory may be directed to the Centre for MB Studies, 1310 Taylor Avenue, Winnipeg, Man., to further the work of historical record keeping.

“The passing of William (Bill) Schroeder marks the loss a significant contributor to Mennonite and Mennonite Brethren history during the past 40 years or more. Bill became a member of the Mennonite Brethren Historical Committee during its first year of existence in 1974. He continued as a member of the committee during the entire span of its existence. He was also a very active member of the Mennonite Historical Society of Manitoba for many years. Mennonites owe a depth of gratitude to Bill for his faithful and significant service for many years.”—Abe Dueck, former director of the Centre for MB Studies, and former chair of the MB Historical Commission

“William Schroeder was a pioneer in the field of Mennonite history. The Mennonite Historical Atlas which William and I produced together became a bestseller by Canadian standards. Through the dedicated work of William Schroeder, Mennonites now have easy access to much of their interesting heritage.”—Helmut T. Huebert