What's New
Through the conflict, life carries on in Ukraine
A FOCUS on Mission
Must Patience Be So Slow?
Harold Jantz: A Heart for the Mennonite Story
Lorlie Barkman: A Life of Creative Engagement
Last Days, First Days
Women in Ministry: Bertha Dyck
January Moment in Prayer “Holy Spirit—Fill Us!”
The Church as the Patient Body of Christ
Advent: Making Much of Jesus: Christmas Day
Home Arts & Culture This little light of mine

This little light of mine 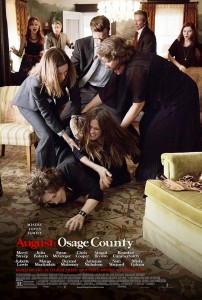 “Abandon all hope, ye who enter here.” As August: Osage County was coming to an end, I envisioned the inscription Dante placed over the gate to hell as this movie’s true title.

The family is brought together by the suicide of Beverly Weston – a once-famous poet who has been looking after his dying wife Violet (Meryl Streep). The three Weston daughters and their families assemble in the family home with Violet and her sister to prepare for the funeral.

Families gather when someone dies. But here it becomes a toxic meeting driven by Violet’s addictions to prescription drugs, her caustic nature and a tormented past. This sets up a perfect storm of grief and remembrance saturated by years of accumulated anger, bitterness and family secrets.

It’s a black comedy. Violet fuels both the black and the comedy.

What makes the movie compelling is that you soon recognize the ensemble of characters. There are the alphas, the betas, the victims and the victimizers, the optimists and the pessimists, the cynics and the dreamers and those who just happen to be dragged along. Of course, we rarely see all of them together in one room at one time.

The movie is also compelling because you are quickly drawn into the hopes and sorrows of each family member, hoping desperately for some redemption. Even Violet in all her poisonous brilliance is exposed as a child crushed by her own mother’s cruelty – and your heart breaks for her.

The oldest daughter Barbara (Julia Roberts) navigates her own failures in the face of her responsibilities as the one on whom de facto responsibility for everything now lands. She is the tragic hero.

These are people you come to love. Hoping they find redemption keeps you engaged.

Until the movie begins to wind down. Then the persistent and intentional snuffing out of each glimmer of redemption just becomes profoundly sad.

So why would anyone go see such a painful story? Why pass Dante’s warning sign?

Because it makes an important statement.

The storyline is a modern tragedy in the tradition of Camus’ The Myth of Sisyphus. In this essay, the hero is condemned by the gods to push a boulder up a mountain only to have it roll to the bottom and have his task resume again.

For Camus, Sartre and Nietzsche, heroism is a continual but hopeless struggle in a meaningless world without God. Their message was raw and has been forgotten by many – but it has not been replaced.

But even as they wrote their visions of life without meaning there were other voices – among them T.S. Eliot.

The movie begins as Beverly Weston gives a book of T.S. Eliot’s poems to Johanna, a caregiver he interviews and then hires to look after Violet. It is a moment you might forget – until the most famous of all Eliot’s poetry rolls across the screen in the last scene.

T.S. Eliot knew life without God would not lead to heroism but pathetic whimpering.

That’s a brave ending for a Hollywood production. It almost makes the sadness and hopelessness worth the price of admission.

There is something else. As the last line rolled across the screen, I remembered that Eliot had taken the rhythm of the children’s ditty “Here We Go Round the Mulberry Bush” as the foundation of “The Hollow Men.” It poignantly contrasts the bleak picture of life without meaning with the lilting songs of British children in their playgrounds.

And it occurred to me that there’s another children’s song – written about the same time as T.S. Eliot’s poem – which is the kingdom response to the dark world of August: Osage County.

This Little Light of Mine.

The world is a dark place, but Jesus came to exactly such pathetic, whimpering humanity as the Light of the world.

In this dark, redemption-less world, we are the ones carrying our little lights.

And then I liked the movie.

Realistic humor, sometimes we have to laugh at ourselves. In the end he really isn’t funny at all. It is the sad story of life. If only we could come to a reality that life doesn’t have to be that way. There were pivotal points for change, but no one saw them. So sad story remains a sad story. If this story reminds you of your own life, seek out a systems family therapist. It does not have to i in the way their lives ended.