What's New
A FOCUS on Mission
Must Patience Be So Slow?
Harold Jantz: A Heart for the Mennonite Story
Lorlie Barkman: A Life of Creative Engagement
Last Days, First Days
Women in Ministry: Bertha Dyck
January Moment in Prayer “Holy Spirit—Fill Us!”
The Church as the Patient Body of Christ
Advent: Making Much of Jesus: Christmas Day
Advent: Making Much of Jesus: Fourth Advent
Home Arts & Culture Mothers make a difference 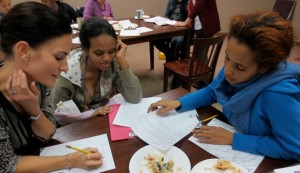 Dressed in colourful finery, seven immigrant women pulled up in front of the Winnipeg Art Gallery in a limousine Mar. 8, 2014. That night, they were the stars of Letters to our Children, a book and documentary that premiered to an audience of some 225 media, government, NGO and church people.

At the heart of the program that birthed this screening and reception is The Meeting Place (Winnipeg MB church) member Lorelle Perry.

“There’s something sacred about moms being moms together,” says Perry. Several years ago, the suburban mother of two young children combined her talents as a trained teacher with English as an Additional Language experience, her love of travel and new experiences and her conviction to obey the great commandment into founding KidBridge – a weekly play group for immigrant and refugee mothers who often lack opportunities for unstructured socialization in a welcoming environment.

Eschewing an offer of financing from a church, Perry instead made application to government grants so the program would not be limited by association with one congregation or denomination. To fulfill conditions of her funding, she organized a project for the women to do together.

One year, Perry oversaw creation of a cookbook where the mothers brought a recipe and explained its place in their tradition. Next, the idea for a children’s book turned into an invitation for the mothers to write a letter to their children, explaining their history, the circumstances that led them to Canada, and their hopes and dreams for their children’s future.

Having a project to collaborate on brings group cohesion, Perry observes. And this project, she prays, will help “the kids to not take their parents’ sacrifices for granted.”

A church foyer conversation introduced another medium of story sharing when professional filmmaker and TMP-goer Leona Krahn heard what Perry was up to. “I’ve always had passion for refugees,” says Krahn. “This seemed like the perfect opportunity to bring together my interest in film and get to know community.” 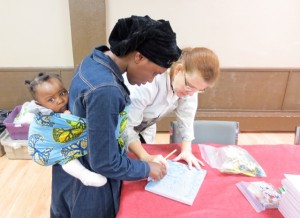 Krahn worked with local telecommunications provider MTS’s Stories from Home to create a 46-minute documentary following the women through the book’s creation.

To illustrate the Letters to our Children book, Perry invited Karen Cornelius, an artist who’d taught printmaking at Perry’s children’s school, to help the woman create paintings depicting their experience. Only after Cornelius enlisted did Perry realize the artist shared a deep connection with the mothers, having herself spent time – and fled from violence – in DR Congo and Eritrea.

KidBridge began four years ago after Perry, a stay-at-home mother of (then) pre-school children, felt God tug on her heartstrings while on vacation. A pastor “flipped” the familiar Sermon on the Mount statement, where your treasure is, there your heart will be also (Matthew 6:21), by asking, “Where do you want your heart to be? Put your treasure of time, energy and talents there [and the heart will follow].” She realized, “I wanted my heart to be with the immigrant and refugees of the city.”

Desiring to “keep the royal law to love my neighbour as myself without partiality” (cf. James 2:8–9), Perry created KidBridge to be a “meaningful program to get the love out there.”

“‘Love your neighbour as yourself’ is cycling through my spirit,” says Perry. “When my theology gets tangled, the surest way to re-establish is to go out there and love. Then when I return to Scripture, it’s so vivid.” Now the many passages that speak of justice for the widow, God’s love for the nations, and instructions to care for the foreigner “leap off the page.”

“Being at KidBridge with all the nations, it’s a bit of heaven come down,” she says. 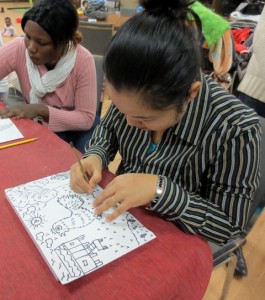 With only 10 days to plan for the International Women’s Day screening, friends from TMP leaped into action to help line up catering, entertainment, decorating, corsages. Local business sponsors emerged to cover costs, and the transitional housing complex where many of the women have lived funded childcare so the women and some of their husbands were able to attend the event. “I caught of glimpse of what it looks like when God is the party planner,” says Perry.

The stars of the show – who Krahn says courageously welcomed the camera crew’s intrusion into their lives – “didn’t realize the impact of their stories until the screening – where they saw how the audience was moved to tears,” says Perry. For these mothers, stories of sacrifice and hardship are common.

Pull up a chair