What's New
Leading through the trauma of covid: Part two...
Ask God which town
Where to from here?
CCMBC National Director attends 2022 ICOMB Summit
MCC Canada and MCC Manitoba sell shared property...
The world appears to be growing darker
Sharing a new and unified language
6 reasons to attend the MWC Global Assembly...
One too many
Just one more
Home Life & Faithfeature articles How to love the foreigner among you

Shediac, N.B., is home to hundreds of migrant workers (mostly Filipino) who work in the local fish, crab and lobster plants. The community has no government services specifically for immigrants. So when Typhoon Haiyan devastated the far-away homes of these Filipino workers in 2013, it was Shediac churches who stepped in.

Local Baptist, Catholic, United and Anglican churches, along with a Gospel Hall, organized fundraisers for workers to send home to their families.  They then cooperated to provide legal and medical services as well as food, better housing, furniture, clothing and transportation for Filipinos in their home community.

As Canada’s population grows through immigration from all over the world, our churches are also becoming more ethnically diverse. The Role of Churches in Immigrant Settlement and Integration study (see sidebar) shows that only eight percent of Mennonite Brethren churches have no ethnic minorities attending.

Since immigrants coming to Canada are on average more religiously devout than the Canadian-born, Christian churches are finding increasing numbers of immigrants and refugees in their pews, and many others in their neighbourhoods.

Denominations and churches sometimes struggle to adapt to and welcome these newcomers. Others are spurred to innovative responses.

In the Maritimes, Montreal, Toronto and Vancouver, our team of researchers studied the ways in which Christian congregations
are supporting new immigrants and refugees.

First, we learned that many churches are actively welcoming newcomers, in keeping with the biblical mandate to love one’s neighbour and care for the foreigner (Leviticus 19:33–34). MBs, and many other denominations, have a long history of settling refugees (at least since the 1970s, when they helped Southeast Asian refugees after the Vietnam War).

Today, refugees still come from desperate circumstances of poverty and violence, with few economic resources and little knowledge of the culture or language. Churches are there to help them settle and transition into life in Canada. Some respondents told us stories of offering sanctuary to refugee claimants whom the government threatened to deport.

River of Life MB church in New Brunswick recently welcomed a refugee family from Tanzania, a process that took more than seven years. Partnering with a local Baptist church, they raised the needed funds within the first year. When the refugee family finally arrived, the churches donated items to furnish an apartment. The whole church was energized to help them settle. A year later, the family still regularly attends River of Life.

Second, we learned that leadership is key. The resources, passion and vision for immigrant support often comes from denominational and church leaders.

In some cases, churches are reactive, meeting needs of immigrants who come to them. Structures are then created to meet their needs, like the provision of English (or French) language classes. Other times, churches are proactive, adjusting their worship services, structures and resources to better integrate immigrants. Whichever the case, leaders (including immigrant leaders) are an important ingredient in determining how churches work with immigrants and refugees.

For example, in Montreal, a Congolese immigrant became the pastor of a church composed mostly of other immigrants from francophone Africa. He encourages his church members to offer their own immigrant experience as a way of accompanying newcomers to Canada. In his words, “Of the people that we helped, 80 percent will say ‘The same way you helped me, I will help others because of what I received when I had nothing, and you gave me something.’”

Third, churches are often better at doing a few things well than trying to be all things to all immigrants. Most churches focus on short-term settlement needs, like providing finances, food, housing, furniture, transportation and language skills. Also, most denominations (71 percent) are actively establishing congregations for newcomers.

Churches are less likely to be involved in long-term integration of immigrants at a societal level, like advocating to change policy and systemic issues, or community development projects that benefit immigrants.

According to recent immigrants we talked to, churches are best at providing relational and spiritual support, as many feel lost and alone in a new country. In fact, some focus group participants argued that this is an advantage that churches have over other government funded services. One said, “As a newcomer myself, I can tell you that without people around you to encourage you, to help you feel like you’re not lost, and to care about you, it’s a very long walk. And that’s the experience of people who come without church support.”

Fourth, more and more churches are partnering with others. Since a typical church cannot do everything, they often cooperate with other churches and agencies. We found many examples of churches working hand-in-hand with government agencies, non-profit organizations and churches of other denominations.

For example, in Vancouver, church groups collaborate with other community agencies to provide affordable and supportive housing for newly-arrived refugee claimants. Originally a ministry of Grandview Calvary Baptist Church in East Vancouver, today Kinbrace is a separate charitable organization that includes two houses in East Vancouver. It partners with a network of refugee services in Vancouver including healthcare, legal and a range of other faith-based and governmental services.

Use the Finding Our Way guide 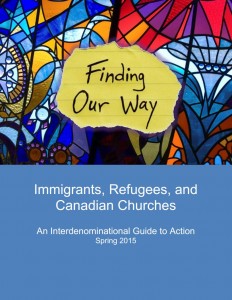 Research partners developed an interdenominational guide to action called Finding Our Way. This practical toolkit features 11 key strategies (“Wayfinding actions”) that church leaders can use in working with – and learning from – immigrants and refugees. Examples include organizing a book or Bible study, writing a formal statement to work with newcomers, inviting a newcomer for dinner at home, sponsoring a refugee family, hosting an intercultural workshop and initiating a community-based arts project.

The guide also encourages individuals and groups to balance the “doing” of settlement and integration ministry with the “being” of a cultivated spirit of love, friendship and welcome.

Finding Our Way is a free resource available to MB churches as well. Download a copy (see website in sidebar), and start your own conversation in your church and in your community.

—Rich Janzen is research director at the Centre for Community Based Research, and attends Waterloo (Ont.) MB Church.

—Sam Reimer is professor of sociology at Crandall University, and member-at-large on the CCMBC executive board.