What's New
Through the conflict, life carries on in Ukraine
A FOCUS on Mission
Must Patience Be So Slow?
Harold Jantz: A Heart for the Mennonite Story
Lorlie Barkman: A Life of Creative Engagement
Last Days, First Days
Women in Ministry: Bertha Dyck
January Moment in Prayer “Holy Spirit—Fill Us!”
The Church as the Patient Body of Christ
Advent: Making Much of Jesus: Christmas Day
Home Arts & Culture Brazil Mennonites: from refugees to missionaries 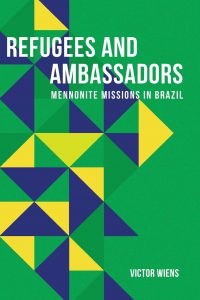 An examination of Mennonites in Brazil, arriving initially as refugees largely via Germany in 1930. Since that time, their integration and assimilation affected the core of the Mennonite identity. The book focuses on the mission component of the community through these transitions.

Wiens applies four lenses to his analysis, history, theology, training and church growth. In doing so he also provides helpful sociological perspectives which add to his analysis and observations. 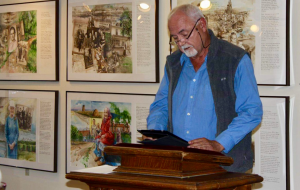 Eckhard Goerz presents on Along the Road to Freedom, paintings to honour mothers.

North American Mennonites do not have a strong identification with their fellow Mennonites in Brazil even though historical ties have been strong in the past.

My personal interest stems from my family history – both parents were part of the refugee process to Brazil, over strenuous objection from Mennonite Central Commitee. However, for my parents, MCC offered no alternatives; migration occurred, but left residual tensions.

My parents met there, married, and started a family. After 10 years, on invitation from Germany to “come home,” they along with several dozen others, returned to Germany – a fateful decision as Germany invaded Poland a month later and plunged Europe into World War II. Numerous relatives remained in Brazil.

My family is part of the experiences described in this book.

Wiens has written an extremely useful examination of the phenomena of Mennonites as a refugee people, who through assimilation and acculturation have retained their commitment to the “Great Commission.” This process, however, has proven difficult and painful with the demise of ethnic and linguistic identities. Charismatic influences, notably from Pentecostal and disaffected Catholics, have been the primary sources of church growth.

One noteworthy development is the formation of RMBC – the Renewed Mennonite Brethren Church. While still retaining the MB label, it is comprised of those departing from their ethnic identity and incorporating Pentecostal and Charismatic practices and dogma, which furthers the mission endeavour but also facilitates further assimilation.

Comment on the book’s theological perspective in light of the MB Confession of Faith.

Particularly for MBs, mission has been central to their faith. In fact, there has been a resurgence of mission enthusiasm especially in North America during the past decades, some argue to the exclusion or minimization of other facets of the Confession of Faith. The book explores this to a degree, although the writer is clearly supportive of the mission emphasis, including on a world-wide scale.

The book fails to recognize the full impact of MCC’s lack of support for the early Brazil migration. This resulted in the Brazil community being described as lesser than the other Mennonite settlers. In turn, the Mennonites in Brazil fostered a stronger association with Christian groups in Europe, notably Germany, the Netherlands, and others (as opposed to North America), countries who maintained a non judgemental and supportive role in terms of financial support and education and training.

At one level, one gets the sense that Brazil Mennonites continue to work at overcoming its lack of self confidence, and to prove its Christian mettle.

In practical terms, this has meant that Brazil has been divided in terms of the “missions market” with Brazil Mennonites focusing on the south of Rio while the areas north of Rio have been subject to North American-generated mission efforts and interestingly with poor results eg the MCC initiative in Recife to the North, being discontinued

The book contains charts and statistics on the growth of Mennonite conferences 1949–2009.

Students of mission, church leaders, and church planters will find this a very useful resource, provided they objectively examine the relevant history of target communities and their own identity formation processes and place in those communities

Additionally, students of church history and genealogy will find it of interest in tracking former family connections of the diaspora following WWII.

Wiens has added a series of pertinent and probing questions at the end of each chapter, making this a useful educational resource.

“That ethno-religious people group that arrived in Brazil as refugees is no more. Many of those former defining qualities no longer characterize that people.”

“No longer the quiet in the land – both refugees and their Brazilian friends have been transformed into ambassadors.”

“We understand our greatest legacy, received from our fathers and transmitted to our children, to be evangelistic mission, dedicated to (all) the Brazilian people.—Alfred Pauls”

is a retired social worker, program/policy analyst and mental health executive. He is a member of Fort Garry Mennonite Brethren Church, Winnipeg.

Winds of the Spirit in Brazil