What's New
A FOCUS on Mission
Must Patience Be So Slow?
Harold Jantz: A Heart for the Mennonite Story
Lorlie Barkman: A Life of Creative Engagement
Last Days, First Days
Women in Ministry: Bertha Dyck
January Moment in Prayer “Holy Spirit—Fill Us!”
The Church as the Patient Body of Christ
Advent: Making Much of Jesus: Christmas Day
Advent: Making Much of Jesus: Fourth Advent
Home News Living out welcome 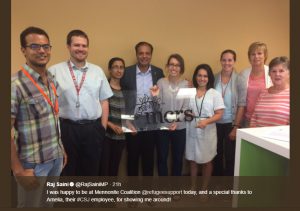 “I didn’t want to be alone…. I wanted to live with people,” says Abdul.* Two years ago, Abdul fled his home country and sought refuge in Canada. He left behind his culture, language – and his wife and 18-month-old daughter. Abdul grins as he shows a picture of his curly-haired toddler whom he has watched grow over video chats. When he crossed the border into Canada, he received little information to help him through the first weeks in a foreign country. But the one thing Abdul was given became his lifeline – the address for the Mennonite Coalition for Refugee Support (MCRS).

MCRS was founded in 1987 in response to the crisis of refugees fleeing violence in Central America. Thirty years later, the organization relies on the hard work of three staff members and hundreds of volunteers and donors. Annually, MCRS assists 400 people from across the globe to navigate the refugee claims process.

Director Shelley Campagnola says dire situations cause people to seek asylum in Canada: “They’re being personally targeted because of the way they live, or the way they have spoken out, or their profession.” The claims process is painfully long and discouraging, Campagnola and her colleagues say. 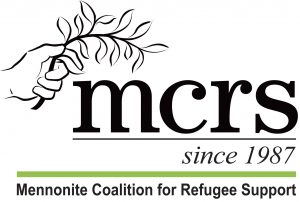 Tony Van Giessen, a caseworker for MCRS for two years, says his clients have no initial access to social supports when they first arrive in Canada. “Oftentimes they have nothing. People end up in shelters and on the streets because they have no other options,” says Van Giessen.

Open Homes, a program MCRS adopted in August 2017, began as a grassroots movement in 2006 when members of Waterloo Mennonite Brethren Church (WMB) realized the need for housing among refugee claimants. MCRS connects church members with MCRS clients, and families open their homes for a few months to give claimants time to learn how to live independently in Canada.

WMB adopted Open Homes as a program of the church in 2015 to provide structure and resources for the growing initiative. As word got out about the program, other churches expressed interest in replicating it. To facilitate the growing network of participants, MCRS took over the Open Homes program.

WMB maintains a local program of Open Homes and remains an invaluable partner to MCRS, says Campagnola. Van Giessen describes the experience of a claimant who lived in an Open Home after a negative stay at a men’s shelter: “He had a place where he could just focus on his claim. He didn’t have to worry. It was night and day.” Abdul’s stay with a family from WMB provided him with a sense of belonging: “The feeling I got from them – it was like going home.”

Over the past nine years, Jake Martin White and his family have opened their home to 25 refugee claimants. Martin White seeks to find balance between helping claimants become self-sufficient and integrating them into family life. He orients his guests to the bus schedule and includes them in his family’s weekly cleaning schedule. 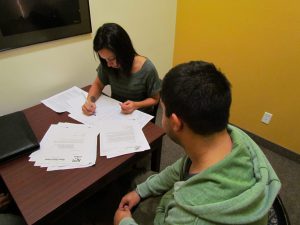 Martin White has become lasting friends with several claimants. “I wouldn’t have anticipated that the work of hospitality would have such a big impact on how I think about the world, how I think about God,” he says.

For Campagnola, the work of MCRS and Open Homes is deeply spiritual. She says, “God is bringing the nations to us; we have an opportunity to walk in the Kingdom.”

When asked why Canadians should open their homes, Abdul’s answer is simple, “When you help people, it feels good – you cannot buy that feeling.”

[Kristen Bonney is a member of Glencairn MB Church, Kitchener, Ont. She works for MoveIn, a ministry that works closely with refugees and new immigrants.

To learn more about MCRS or to support their ministry of welcome, go to www.mcrs.ca.